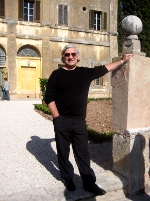 He was born in London and educated in France, and his books have been translated into many languages. From an early age, he was always fascinated by popular culture and his writing and editing has criss-crossed all areas, from science fiction & fantasy to thrillers and, inevitably, erotica.

He has been a columnist for TIME OUT and the GUARDIAN, and contributed to most major newspapers and magazines, and is a regular arts commentator on British TV and radio. He also runs London’s annual crime film and literary festival CRIME SCENE and is a consultant for several overseas film festivals. He has won the Anthony and Karel awards for his contributions to, respectively, crime fiction and SF & fantasy.

His erotica has always proved controversial and somewhat dark and idiosyncratic. His short story collections are LIFE IN THE WORLD OF WOMEN, FOOLS FOR LUST and as e-Books A WASHINGTON SQUARE ROMANCE, WE MATE IN THE DARK and THE MUSIC OF BODIES. His novels include IT’S YOU THAT I WANT TO KISS, BECAUSE SHE THOUGHT SHE LOVED ME, ON TENDERNESS EXPRESS (a trilogy since reissued as SKIN IN DARKNESS), THE STATE OF MONTANA (which sold to Hollywood), KISS ME SADLY, CONFESSIONS OF A ROMANTIC PRONOGRAPHER and I WAS WAITING FOR YOU. He has beeen called by the TIMES ‘the King of the erotic thriller’.  His new novel is EKATERINA AND THE NIGHT, an unusual twist on the Lolita theme, set in London, Paris, New York and Venice, full of his customary obsessions, lust, doom and even supernatural overtones.

He still doesn’t have a website, preferring to use the time to write, live, read, see films and collect books, CDs and DVDs with a vengeance which occupies the equivalent of nearly 15 rooms (yes, it is a large house…).