You are here: Home / Reviews / eBook Review: Lucky For Him by Rachel Randall 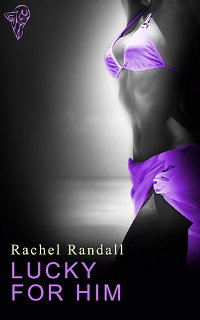 Lucky For Him has also been released by Total-E-Bound as part of their Sharing the Billionaire anthology. This story by Rachel Randall tells the tale of Rob Ray, an entrepreneur eager to dive into his next challenge – whatever it takes. He’s heard that Argentinian billionaire Renzo Vega has invested in a secret project known only as ‘Lucky.’

When Vega refuses to speak with him, Rob takes matters into his own hands and stows away on his luxury yacht. He’s quickly discovered, and is then in the hands of the most charismatic man he’s ever met. Vega’s right-hand woman is in fact, the elusive ‘Lucky,’ an ex-hacker who’s not only sexy, but knows how to push all of Rob’s buttons.

Vega and Lucky want Rob to be their on-board entertainment. He’s given little choice, but if he’s honest with himself, the charismatic businessman and the sexy geek turn him on beyond belief. Soon, the three of them are engaged in a hot ménage, and Rob thinks all of his birthdays and Christmasses have come at once. But, sex aside, will he get his hands on what he was looking for, his next project, or was his risk-taking a waste of time? You’ll just have to read the book and find out!

I’ve read several of Rachel Randall’s books in the past and enjoyed them. This one was no exception. The storyline and setting in Lucky For Him are intriguing, as are the characters. The whole tale is sultry, sexy, and leaves you eager to find out what happens next. The sex is smoking hot and leaves you in no doubt as to why Rob Ray asks for more. My only criticism of this book is that I felt the ending was a little abrupt. I wanted more of the characters, more of their story. Perhaps Ms. Randall will oblige and write a sequel.