You are here: Home / Guest Blogs / An Echo in the Sorrow by Hailey Turner 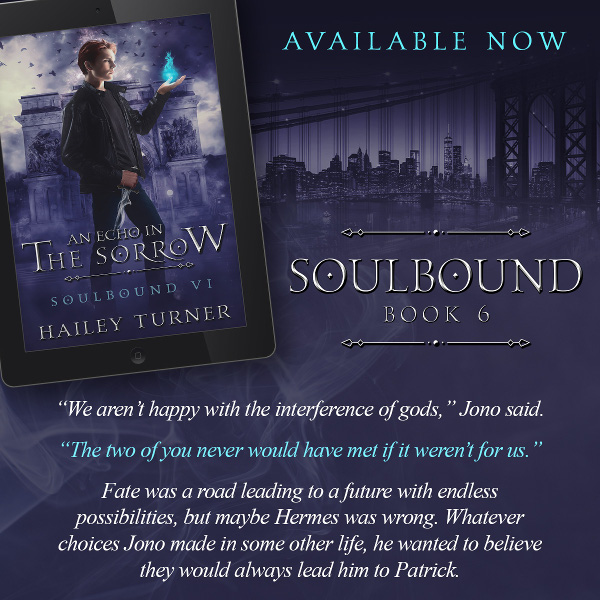 Jono knows they can’t cede any more territory if they want to win the god pack civil war spilling into the streets of New York City. But the souls of werecreatures are free for the taking when demons come to town and angels sing a warning no one can ignore. When Jono’s worst fear comes to life, and he loses the one person he can’t live without, the only option left is to fight.

Facing down the demons of their past and the ones in their present, Patrick and Jono will learn the hard way that some sins never wash away clean.

An Echo in the Sorrow is a 118k word m/m urban fantasy with a gay romantic subplot. It is a direct sequel to On the Wings of War. Reading the first book in the series would be helpful in enjoying this one. 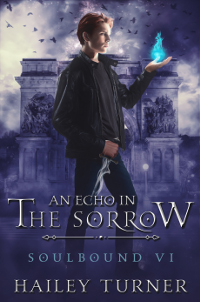 “The only way to win is to take them out completely. That’s going to be a costly fight in terms of blood and territory,” Jono said.

“What about our alliances?” Wade asked.

Jono shook his head. “Their assistance in maintaining our borders is helpful, but we need to be the ones to push Estelle and Youssef out. This is our fight.”

“What about going the direct route and meeting them in the challenge ring?” Marek asked.

“I wouldn’t trust any fight that happens in that place,” Amelia said flatly.

Other people in the crowd echoed her statement. Patrick had never been to the challenge ring located beneath the god pack home in Hamilton Heights. The underground space was familiar to everyone else from the times all the alphas had been summoned to meetings. He’d seen the aftermath of fights held in other challenge rings to know they were bloody spaces. He agreed with Amelia though—no fight held in a space controlled by Estelle and Youssef could be handled fairly.

“I’m not sure how much help the fae will be able to provide right now. Tiarnán was summoned to Tír na nÓg today on an emergency basis. He’s been our liaison for the fae, and I don’t know when he’ll return,” Sage said.

Patrick shrugged. “His absence shouldn’t affect the alliance. We—”

A loud explosion in the bar above cut him off, magic crashing against the wards embedded in Tempest’s walls. They flashed fire bright for a split second, nearly blinding Patrick. Before the glow faded, Patrick was on his feet and racing for the stairs, Jono right on his heels. The crowd of alphas peeled away from his headlong rush forward, giving them both space.

About the Author: Hailey Turner is a big city girl who spoils her cats rotten and has a demanding day job that she loves, but not as much as she loves writing. She’s been writing since she was a young child and enjoys reading almost as much as creating a new story.

Newsletter:  You can keep up with Hailey’s future projects by joining her newsletter, where you can instantly download several free short stories:  http://bit.ly/HaileyTurnerNews