You are here: Home / Guest Blogs / An Exclusive Excerpt from Jaymie Holland

A gust of wind stirred Alice’s long hair about her shoulders while she walked barefoot through the grass to the tree. She braced one hand against its rough, tattered bark and peered around its trunk.

A snow white, lop-eared rabbit. The bunny had bright pink eyes and a cute little pink nose that twitched as it looked up at her.

Alice smiled. It had to be someone’s pet—it definitely wasn’t the wild variety. “I’ll bet you’re lost, aren’t you, sweetie?” she murmured as she took a step forward. She hesitated and squinted. A white tiger?

The bunny morphed before her eyes into one of those huge rare white tigers she’d seen at a magic show in Las Vegas. At the Mirage, she thought. This bunny/white tiger was simply a mirage.

Okay, Alice, you’re hallucinating. Time to go visit the doctor. Or better yet, a shrink.

She started to back away from the figment of her imagination just as the ground gave out beneath her bare feet.

Terror ripped through her as she pitched into nothingness.

Alice screamed as she tumbled through air so thick it felt like pudding. Faster and faster she dropped through the black void. She couldn’t stop screaming, couldn’t stop falling. Her heart beat like it was going to come out of her chest as she fell and fell.

Bright light stabbed at her eyes, and then she slammed onto her back, on an unforgiving surface. Air whooshed from her lungs and pain shot through her head.

For the briefest of moments she thought she saw a massive white tiger peering down at her, but then it was gone. 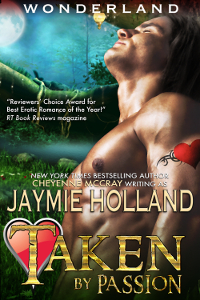 After being cheated on yet again, full-figured Alice O’Brien no longer believes she’ll find her Prince Charming. She resolves to enjoy men, but refuses to involve her heart.

When she literally tumbles down a rabbit hole, she finds she has left her familiar home city of San Francisco. She has landed in a strange and beautiful world, where she meets a powerful and dominant shapeshifter, Jarronn, and his equally fierce and irresistible brothers.

By the draw of a card foretelling his kingdom’s future, Jarronn has deliberately lured Alice to his realm in hopes of averting a terrible danger threatening his people. He has every intention of saving his kingdom with his and Alice’s bond of passion, and nothing will stop him from making her his Queen of Hearts. 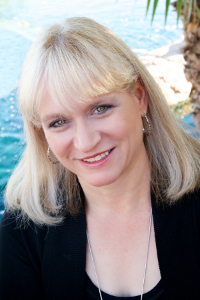 About Cheyenne (writing as Jaymie Holland)

Some of Cheyenne’s awards:

*CAPA award from The Romance Studio

Cheyenne grew up on a ranch in southeastern Arizona. She has been writing ever since she can remember, back to her kindergarten days when she penned her first poem. She always knew one day she would write novels, hoping her readers would get lost in the worlds she created, just as she experienced when she read some of her favorite books.

Chey has three sons, three dogs, and is an Arizona native who loves the desert, the sunshine, and the beautiful sunsets. Visit Chey’s website and get all of the latest info at CheyenneMcCray.com and meet up with her at Cheyenne McCray’s Place on Facebook! (http://www.facebook.com/pages/Cheyenne-McCrays-Place/183525008980)

Or check out Chey writing as Jaymie Holland: http://www.jaymieholland.com/

Be sure to follow the tour and comment; the more you comment, the better your chances of winning. The tour dates can be found here: http://goddessfishpromotions.blogspot.com/2015/02/excerpt-tour-wonderland-taken-by.html