You are here: Home / Guest Blogs / An Exclusive Excerpt from (Un)Masked by Andy Gallo and Anyta Sunday (@anytasunday) 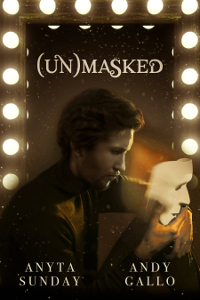 (Un)Masked, the paranormal gay romance by Andy Gallo and Anyta Sunday, tells the story of Jay and Lethe who have to overcome a centuries old curse to finally be together.  A curse that forces Lethe to hide his face—even from the man he loves. There’s nothing Jay wants more than to unmask Lethe – like in this intimate exclusive excerpt.  And check out (Un)Masked to find out if Jay and Lethe can break the curse, and if Jay can truly see his love.

“I want to see you so badly, it hurts inside.”

He hesitated, and for a moment, I thought he might agree. Might slip his fingers under the straps and untie the division between us.

His eyes closed. “If you won’t see me…if you’ll never see me again….”

I pulled out a chair and slumped myself on it. I stared at the paua I’d given him that he kept in the middle of his table. He shuffled behind me, but I didn’t look away from the swirling greens and blues.

Lethe gripped my shoulders. Fingers massaged the tight knots. The kiss he placed on the nape of my neck had me closing my eyes.

Shhhrp. The distinctive sound of Lethe untying the mask. “Don’t turn around,” he said as he laid the half face on the table.

He trusted me not to turn. I wanted him to have that faith in me, but it took all my strength to resist the urge.

Lethe breezed past my side, and I felt the heat of his body settling before me. He placed my fingers on the sides of his face. “See me with your hands.” I had his face memorized by feel. Angular jawline, sharp nose, fine brows, long lashes. I grazed over clammy, wet cheeks. A wispy breath touched my face. Soft lips brushed over mine. His lashes combed over my own, and he rested his head against mine.

“I really hate this mask, Jay.”

I broke inside for him, for me, for us. I wanted so badly to take away his pain. Wanted him to know how much I—

I swallowed, stroked his hair, and whispered, “I love you, Lethe Cross.”

His face quivered, cheeks rose. I outlined his smile with my thumb, but as much as I tried to picture his whole face, I couldn’t. I kissed his slightly cracked lips. And then more words flew out of my mouth, coming from deep inside me and out of my control. “Please, can I look at you?”

Lethe stiffened, and his smile disappeared under my fingertips. He sniffed, and his head shook under my hands. “Sorry.”

Walker has two wishes: to perform the play of his dreams alongside his best friend at Wellington’s Tory Street Theatre, and to meet that special someone. Someone he’d go to the ends of the earth for. Someone who might only exist in fairy tales.

When Jay meets accordion busker Lethe Cross, it’s like living a dream come true. Lethe’s music captivates Jay, and he resolves to meet the man who plays so beautifully. But then he discovers Lethe’s life is more like a nightmare. The phrase “down on his luck” can’t begin to cover it. Determined to help, Jay does some snooping for answers—and winds up on the wrong end of a centuries-old curse. The good news is there’s a way to break it. The bad news is it might cost Jay his life.

This book was previously published by Dreamspinner Press. This updated 2nd edition has some rewritten parts and has been line edited again.

Anyta Sunday is a big, BIG fan of slow-burn romances. She loves to read and write stories with characters who slowly fall in love.

Some of her favorite tropes to read and write are: Enemies to Lovers, Friends to Lovers, Clueless Guys, Bisexual, Pansexual, Demisexual, Oblivious MCs, Everyone (Else) Can See It, Slow Burn, Love Has No Boundaries.

Anyta writes a variety of stories, Contemporary MM Romances with a good dollop of angst, Contemporary lighthearted MM Romances, and even a splash of fantasy. Her books have been translated into German, Italian and French.

Member of Romance Writers of America.

Andy Gallo’s stories capture how he wished he’d spent his formative years, instead of how it really happened. Unfortunately for his characters, they find themselves infused with some of Andy’s less noble qualities.

A hopeless romantic, Andy writes seated next to a hundred year old Smith Brothers typewriter he inherited from his grandfather. He also dreams of superheroes and wizards and sees no reason why two men with superpowers can’t fall in love just like everyone else. Although not all of his stories have a paranormal bent, a touch of the supernatural never derailed a good read in his mind.

Married and living his happy every after, Andy helps others find their happy endings in the pages of his stories. He and his husband of more than twenty years spend their days rubbing elbows with other parents as they raise their daughter. Embracing his status as the gay dad, Andy sometimes has to remind others that one does want a hint of color even when chasing after their child.