Hey nerds! Erica Kudisch here promoting my novel DON’T FEED THE TROLLS, a genderqueer romp through internet drama. And if you keep up with the blog tour and its bonus DLC, there’s a $50 prize package achievement for you to unlock. Have fun!

When I was designing the concept of the MMO Daphnis, Orin, and Laura play, I tried to create a game that would stand out from the horde. Most MMOs are either in variants of the Standard Fantasy Setting or deep space; the game I based Eternal Reign on, EVE Online, is a deep space sci-fi extravaganza. Since I was using Twelfth Night as my plot inspiration, which starts with a shipwreck, I thought it might be cool to build an MMO around the Age of Exploration and Imperialism, with a decidedly tudoresque flavor, and once I tapped that node the rest fell into place.

Eternal Reign is built on the idea that when Magellan sailed off the edge of the world, he wound up in an endless ocean, studded with archipelagos and, of course, already inhabited. The arrival of the humans–Settlers, in game parlance–complicates the war between the indigenous Kharthi and Aqueian peoples. There’s a prevalence in game setting design of having one race that’s “basically elves” and one that’s “basically dwarves”, to differentiate them from human jacks-of-all-trades: Since I was trying to make a game that reflects those problems in the current industry, the Aqueians are the agile and magical “elf” race of insular merfolk, and the Kharthi get “dwarf” defensive and offensive bonuses and are portrayed as expansionist landborne industrialists. Because of course some Settlers go off-mission and start lives with the indigenous population, the Touched race is included as a kind of half-elf designation, and the offworld Liqing shipwrights were added in an expansion when players called for more diversity. (Because diversity isn’t built into the gaming industry, and when they try it can be awkward, so it takes a lot of public push to get stuff done.) All player characters start at the rank of Knight, and begin with small holdings (either land, sea demesne, or a ship).

But the choices don’t stop there. Eternal Reign, like its inspiration EVE Online, is meant to be so open-world that players effectively create their own content. They can stay in secure, “charted” territory, dip their toe in risky “controlled” territory, or venture out into uncharted waters and risk death in the mouth of something unpleasant. Players call it the “Saltwater Sandbox” because once they’re in that endless ocean, they get to make their own games by consensus. Common playstyles include piracy (stealing the holdings of other players), convoy (collaborating with the more advanced players in your area to facilitate transportation or territory reclamation), sabotage (infiltrating another player’s holdings for your own faction), and mercantilism (yes, people really do create in-game markets and hunt, trade, or alchemitize materials for other players). But, unfettered by developer-created mission constraints, players can get especially creative about the kinds of stories they want to tell.

Daphnis’s in-character “court game” is a social game that basically sets up a Tudor nobility complete with infighting. The Duchess Fatiguee (Daphnis’s character) encourages her courtiers to amass power and undermine each other’s efforts in the hopes of taking the Duchess’s throne. In most MMOs that kind of PVP wouldn’t be possible, but because of Eternal Reign’s emphasis on player-created missions and opt-in aggro, Daphnis and Orin could set something like this up in uncharted waters, with players strong enough to survive. But the kind of players strong enough to face these challenges are also the kind of players willing to do anything to achieve their goals, and that’s where the trouble begins… 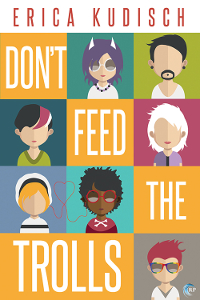 About Don’t Feed the Trolls

Gaming while female is enough to incur the wrath of the dude-bros, and they’ve come for me. Instead of fighting back, I’ve created an alternate account. Male name, male pronouns. And I’ve met this girl. I’ve always liked girls, and Laura’s adorable and smart and never gives up, and she likes me back. Or rather, she likes the man I’m pretending to be. But I can’t tell her I’m a woman without the mob coming after her too.

And besides: I might not be a woman, not really.

The truth is, I don’t know what I am anymore. I’ve spent my whole life being told how I’m supposed to act and what I’m supposed to be, but none of it feels right. And my lie is starting to feel truer than anything I’ve ever been.

There’s a convention coming up, but the closer it gets, the more I have to choose: lie or fight. But if I don’t stand my ground as a girl, am I letting the haters win?

Then again, those aren’t the only two ways to live.

Erica Kudisch lives, writes, sings, and often trips over things in New York City. When not in pursuit of about five different creative vocations, none of which pay her nearly enough, you can usually find her pontificating about dead gay video games, shopping for thigh-high socks, and making her beleaguered characters wait forty thousand words before they get in the sack.

She also has issues with authority. And curses too fucking much.

To celebrate the release of Don’t Feed the Trolls, one lucky winner will receive a $30 Riptide credit and a $20 Steam gift card! Leave a comment with your contact info to enter the contest. Entries close at midnight, Eastern time, on April 8, 2017. Contest is NOT restricted to U.S. entries. Thanks for following the tour, and don’t forget to leave your contact info!