A decade and a half before Harry Potter and the Philosopher’s Stone, Diane Duane started her Young Wizards series with So You Want to Be a Wizard. I think I discovered it because—even though I was already an adult—I loved middle grade and YA books about the possible intersection of the mundane and the fantastic. (Diana Wynne Jones, the true master of this kind of story, remains one of my favorite authors to this day.)

In High Wizardry, the third book in the series, the younger sister of So You Want to Be a Wizard’s main character starts her own journey to wizardry. Her specialty is computers, and there’s a lovely scene with her on a sentient planet where silicon-based beings interact with her. Each of the beings is different, and they all want—no, they need—something from her.

Like computer files, the creatures can’t exist without a name to define them.

I’ve discovered that I have a lot in common with those little guys. Names are critical to me when I start writing. Character names are important, of course, especially the main couple. Until I know what to call them in my head, I can’t figure out what their story is.

And until I figure out the book title? I’m dead in the water.

I contracted the Supernatural Selection series based on an extremely sketchy proposal—and thank goodness my publisher trusted me enough to believe I could deliver! I didn’t have titles for any of the books. I didn’t have a name for the series—at the time, I was just calling it “the supe matchmaking series.”

I figured out the series name first. But I still didn’t have the book titles—and the deadline for the first book was creeping up on me. So I did what any reasonable, self-respecting author would do.

Then I got over myself and got to work. I played with words relating to the supes in each book. To give you an idea of my desperation, the three initial ideas I jotted down for the first book (in increasing levels of annoyance) were:

Does a Bear Shift in the Woods?

(Of course, that third one became the book’s tagline, but as a title? I was obviously flailing.)

So I researched online dating apps and articles about how people today connect with one another. But as I read about Tinder and OkCupid and Bumble, I realized that the supe community wouldn’t be that technologically advanced. For one thing, I’d already established in the Fae Out of Water trilogy (which is in the same Mythmatched story universe) that supes are mired in tradition and resistant to change. They’d go old-school with their matchmaking.

Before dating apps, or online services, or, heck, the freaking internet, the revenue from personal ads was a major income stream for many periodicals—Portland’s own free weekly, Willamette Week, being a case in point. Since personal ads were priced by the word, to keep costs down, the advertisers used an extensive list of abbreviations and acronyms.

I looked them up—and figured out all three titles immediately from the personal ad I imagined my characters would place. Quentin’s personal ad is actually on the cover of Single White Incubus:

Of course, Quentin couldn’t leave it at that, given his determination never to threaten anyone’s life again:

The living need not apply. 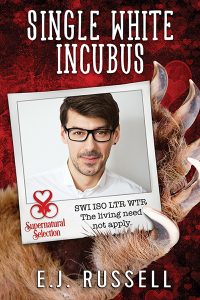 Does a bear shift in the woods?

Well, partially. That was what got grizzly shifter Ted Farnsworth into trouble. He wasn’t trying to break the Secrecy Pact. He just wants people to see the real him. So he signs up with the mate-matching service Supernatural Selection — which guarantees marriage to a perfect partner. Not only will Ted never be lonely again, but once his new beaver shifter husband arrives, they’ll build Ted’s dream wilderness retreat together. Win-win.

Quentin Bertrand-Harrington, scion of an incubus dynasty, has abstained from sex since nearly killing his last lover. When his family declares it’s time for him to marry, Quentin decides the only way not to murder his partner is to pick someone who’s already dead. Supernatural Selection finds him the ideal vampire, and Quentin signs the marriage agreement sight unseen.

But a mix-up at Supernatural Selection contracts Quentin with Ted. What’s Ted supposed to do with an art historian who knows more about salad forks than screwdrivers? And how can Quentin resist Ted’s mouthwatering life force? Yet as they work together to untangle their inconvenient union, they begin to wonder if their unexpected match might be perfect after all. 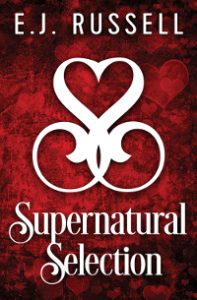 To celebrate the release of Building Forever one lucky person will win a $25 Riptide Publishing gift card and an ecopy of Cutie and the Beast, the first title in the Fae Out of Water series! Leave a comment with your contact info to enter the contest. Entries close at midnight, Eastern time, on October 27, 2018. Contest is NOT restricted to U.S. entries. Thanks for following along, and don’t forget to leave your contact info!