You are here: Home / Guest Blogs / Exclusive Excerpt from Prince of Killers by Layla Reyne #giveaway 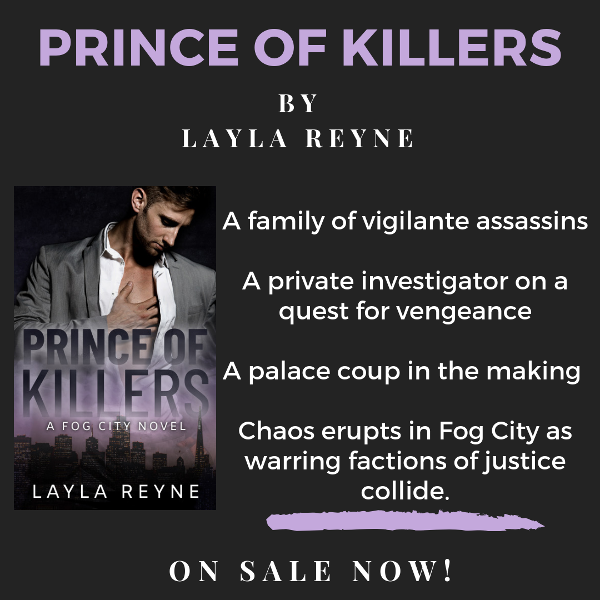 Laughter bubbled out of Hawes, unexpected and welcome, even if it did set off another ripple of back spasms. He grasped Dante’s biceps, rotated him toward the main area, and gave him a shove. “I wasn’t sure if that rock-star strut was an act or if you were that damn arrogant.”

Dante grinned over his shoulder. “I’ve been called worse.”

At the end of the hall, Hawes hit the next set of switches, illuminating the open-plan kitchen, den, and dining areas. Track lighting hanging from the overhead beams reflected off polished hardwood floors, white cabinets and countertops, sterling-gray walls, and huge windows and glass balcony doors in the brick wall at the far end of the space.

Dante circled the den, laying his jacket and gun on the leather couch, while Hawes scratched behind the ears of his black Bombay cat, who’d taken up position on the dining table. She clawed at the bandages on his hand and hissed at the stranger in their domain. “Iris doesn’t like you.”

“Iris doesn’t know me.” Nevertheless, Dante wisely steered clear of her claws and came to a stop next to the rolling wooden ladder, which was locked in place on its short track. “Nice place, though I’m not sure about the ladder to nowhere.” He snaked an arm through the rungs, showing off his broad chest and flexing biceps.

Hawes licked his lips. Even better than the abs.

“You want to show me?” Dante said.

“Doesn’t stop you from picking up guys in the clubs when you go out.”

He’d been tracking him, then. Hawes tucked away that piece of information. “Those guys don’t open by telling me someone wants to kill me.”

“I may have gone about that wrong,” Dante conceded.

“If you were trying to get into my pants, yes.”

Mission accomplished there. Hawes ignored the phone buzzing in his pocket and rested a hip on the corner of the built-in desk behind the couch. As much distance as he could get from the too tempting man leaning against the ladder. “What do you want, Mr. Perry?”

“I want to stop the person trying to unseat you.”

“My guardian angel sent from North Beach.” Hawes folded his arms. “And why is that?”

Dante’s posture remained casual, but his gaze sharpened, dark and ominous. “Because I think the same person is responsible for Isabelle Costa’s death.”

“Her death was ruled a domestic disturbance. Her boyfriend also died at the scene.”

“We both know that’s a load of horseshit.”

Hawes remained motionless, even as bile stung the back of his throat. “Who was she to you?” he asked, trying to crack that door open wider.

She’d mattered to Hawes too. Not enough before her death, the world after.

He fled the scene of the crime a second time, avoiding Dante’s gaze and ambling in the direction of the glass and brick wall. Ignoring the pair of tufted leather accent chairs, he draped his arms over the diagonal seismic strut, staring out the balcony windows and watching the fog creep into the moonlit courtyard. “I meant what I said at Danko. I always expect someone wants to kill me.” 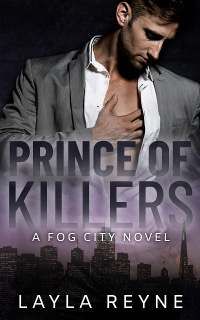 No indiscriminate killing. No collateral damage. No unvetted targets.

These are the rules Hawes Madigan lives by. Rules that make being Fog City’s Prince of Killers bearable. Soon, he’ll be king—of an organization of assassins—and the crown has never felt heavier. Until the mysterious Dante Perry swaggers into his life.

Dante looks like a rock god and carries himself like one too, all loose-limbed and casually confident. He also carries a concealed weapon, a private investigator’s license, and a message for the prince. Someone inside Hawes’s organization is out to kill the future king.

In the chaos that follows the timely warning, Hawes comes to depend on Dante. On his skills as an investigator, on the steadiness he offers, and on their moments alone when Hawes lets Dante take control. As alliances are tested and traitors exposed, Hawes needs Dante at his back and in his bed. But if the PI ever learns Hawes’s darkest secret, Hawes is sure to get a knife to the heart—and a bullet to the brain—instead.

There’s no shortage of twists and turns in this new romantic suspense trilogy from Layla Reyne. Prince of Killers is book one of three. Fair warning: buckle up, cliffhangers ahead!

About Layla Reyne: RITA Finalist Layla Reyne is the author of the Agents Irish and Whiskey, Trouble Brewing, and Changing Lanes series. A Carolina Tar Heel who now calls the San Francisco Bay Area home, Layla enjoys weaving her bi-coastal experiences into her stories, along with adrenaline-fueled suspense and heart-pounding romance. She is a member of Romance Writers of America and its Kiss of Death and Rainbow Romance Writers chapters. Layla is a 2019 RWA® RITA® Finalist in Contemporary Romance (Mid-Length) and 2016 RWA® Golden Heart® Finalist in Romantic Suspense.