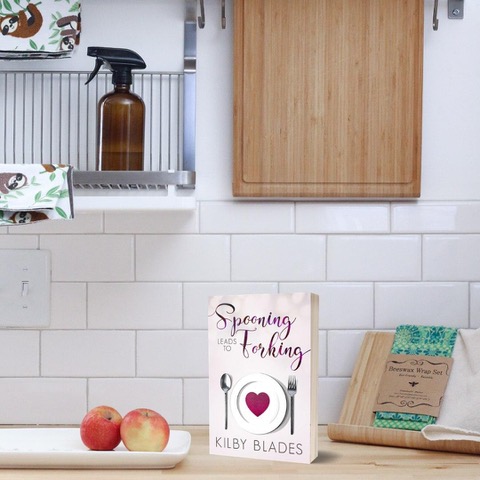 Someone beat me to the bench.

It was the first thing Dev noticed as he arrived to the clearing at the end of the path. The trailhead was set a hundred feet back from the edge of the bluff. The stone bench where people liked to sit stood below an ancient oak and was angled to face east. The sky was lightening gradually but he’d arrived in time for the main event. It was still too dim to see anything more than his companion’s silhouette.

At first, Dev thought to steer clear—no one came to the bluff because they wanted to chat. Though, he might give a wave and make conversation once the sun rose. He could fan out wide, sit on the grass and enjoy a glorious view of the sun rising over the valley. There was plenty of beauty for them both. Only, the closer he got, the more the silhouette on the bench became unmistakable. Even half-covered by a baseball cap and shrouded in darkness, it was hard to miss Shea’s pouf of hair.

Her face was angled to gaze toward him, but there was no way of knowing how much she could see on his approach, or whether she could tell that it was him.

“Twice in three days,” he said quietly as he approached the bench.

It was too tranquil to loud-talk into the morning. Shea would hear him fine, even from ten feet away.

“My place gets a lot of great sunsets. But sunrises…” Her voice was calm, as if she had been relaxing there for hours. “…someone told me this one shouldn’t be missed.”

By the time he reached her, she had moved over to make room for him on the bench. He sat down and cast his eyes out toward the horizon, knowing with precision exactly where the sun would peek out at that time of year.

“Do you watch it every night?” Dev asked of her sunsets, wondering not for the first time how she passed her time in that big house all alone.

“No.” She sounded thoughtful as she shook her head. “But I should.”

Dev watched the brightening glow of the clouds that were visible in the distance. The sunrise would be just minutes away.

“I have a hard time with that,” Dev confessed. “Making time for the little things that matter.”

Shea kept her eyes on the horizon as she spoke. “I’m usually pretty good with the little things. It’s the big things that trip me up.”

“What are your big things?” he wanted to know.

“Being wherever in the world I’m supposed to be. Doing what I’m passionate about. I thought my midlife crisis kind of gave it away.”

“Midlife?” Dev threw her an I-call-bullshit kind of look he was sure she couldn’t see. Her lips melted into a smile.

“Hello? I bought an awesome car. That’s, like, chapter one in the midlife crisis handbook.”

“What’s chapter two?” He wanted to keep looking at her.

“Marrying a woman half my age, but it’s illegal to marry fifteen-year-olds, so I decided to skip that one.”

Dev looked back out at the horizon and was only half-joking when he said, “Maybe I need a midlife crisis.”

She turned her head toward him dramatically, making a big production of saying, “Midlife?”

Dev laughed and it felt good. “I think I’d start with chapter three.”

“Yikes. That sounds even worse.”

Dev wove his head back and forth in a universal gesture of indecision. “I think it could be a good thing. Uncharacteristic, for me, would be taking up a hobby or sitting on a beach for a month. People tell me I work too much.”

“Do you think you work too much?” Dev wished he could really see her face. Something in her voice was serious.

“Tough question to answer,” Dev admitted. “I really love what I do. When I’m doing it, it doesn’t feel like work.”

“But…” he began haltingly. “…by the time I snap out of work mode, which is usually very late in the day, I look around and everything else in my life is in a state of neglect.”

Dev had never said that word to himself. Maybe explaining it out loud made all the difference. The more he turned it over in his mind, the more he realized that it was fitting.

“I think that’s what all midlife crises are about,” Shea chimed in. “We know what’s fun versus what’s good for us versus what we’re passionate about, and we’ve probably learned to appreciate the little things much more.” She jutted her chin toward the sunrise. “It’s just a matter of finding balance.”

“What chapter teaches that?”

“I don’t know. I haven’t gotten there yet. I’m still reading the one that tells you how to sleep a lot and change careers.”

“Sleep…” Dev muttered. “I could use about a month of that.”

“Can I ask you a question, then?” Shea asked. “What’s stopping you from taking a break? It’s a luxury most people don’t have.”

Dev didn’t answer, mainly because he didn’t have a good one. 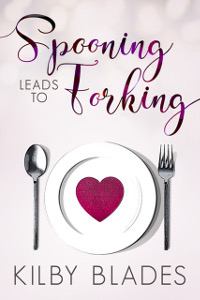 Synopsis for Spooning leads to Forking:

Leaving her name—and her job as a top food critic—behind in New York, Shea Summers seeks respite in Sapling. Her borrowed mountain getaway seems perfect for writing her opus. It’s also perfect for riding out a messy divorce and hiding the roomful of cash she kind-of-sort-of stole from her ex.

Too bad Sapling is a remote, three-restaurant town with food that leaves much to be desired. Sexy grocer, Dev Kingston, may be Shea’s saving grace. The way he looks at her with his aspen-green eyes shows her everything her marriage was missing, and he can special-order every delicacy she craves.

But Shea’s not the only one who isn’t what she seems. Dev moonlights as a sheriff’s deputy, a fact she finds out too late; a string of suspicious crimes finds newcomers under scrutiny; and her ex is going to extremes to find out where she is.

Taking the money and living under an assumed name might be on the right side of wrong, but dating Dev is a dangerous game. She’s still running and he’s still the law.

When she’s not writing, Kilby goes to movie matinees alone, where she eats Chocolate Pocky and buttered popcorn and usually smuggles in not-a-little-bit of red wine. She procrastinates from the difficult process of writing by oversharing on Facebook and Instagram and giving away cool stuff related to her fiction novels to her newsletter subscribers.Kilby Blades is a 45-time-award-winning author of Romance and Women’s Fiction. Her debut novel, Snapdragon, was a HOLT Medallion finalist, a Publisher’s Weekly Book Life Prize Semi-Finalist, and an IPPY Award medalist. Kilby was honored with an RSJ Emma Award for Best Debut Author in 2018 and has been lauded by critics for “easing feminism and equality into her novels” (IndieReader) and “writing characters who complement each other like a fine wine does a good meal” (Publisher’s Weekly).

Win an amazing gift basket or a signed paperback copy of Spooning leads to Forking by Kilby Blades: