He had no idea what was about to happen, but he was in. He was her faithful student.

For tonight, he belonged to her.

“You still with me?” she whispered, sidling closer.

“I want to kiss you so badly I can hardly breathe.” The words blurted out of him, like he had no control over his own mouth.

Then her lips were right there, right under his. The electricity of that first touch weakened his knees. Weakened him but made him feel stronger too.

Her fingers immediately tangled in his hair, and he had to shut down a groan. It had been too long since someone had touched him like it was integral to be skin to skin, lips to lips. And oh, damn, her lips. They were soft and sweet, and she kissed him with absolutely no reservations or timidity. She went for it. All in, like she was hungry for his lips and tongue and teeth. Their kiss lit up his whole body.

He skimmed his fingertips across the back of her neck and down the long line of her spine. His hands ached to clutch and cup and manhandle.

“Grab my ass,” she whispered against his lips, as if she’d read his mind. “I don’t want polite.”

Well, hell. He could try impolite for once. He snuck his hands down to her thighs and rucked her pretty red dress up around her waist. Then he grabbed her bare butt, his thumbs skimming the top of her satiny thong. God, she felt amazing.

“What do you want?” he said in her ear, causing her to shiver. “I’ll give you whatever you want.”

“Today? Will you teach me something different tomorrow?”

“It could be the twelve days of Christmas sex toys. A new gizmo every day.”

She chuckled, and he kissed her again. She tasted like his favorite wine.

When she pulled back for a breath, he sang, “On the first day of Christmas, my …”

They gazed at each other, stuck.

“My fuck buddy gave to me?” she suggested

Laughter bubbled up inside him, and her laughter followed until they were both giggling and holding each other up. She unbuttoned his jeans and shucked them to his knees. Suddenly sober, he yanked her toward him, and she wrapped one of her legs around his waist so his erection pressed against her core through their underwear.

“Watching you make yourself come would honestly be the hottest thing ever,” he said, his voice ragged.

He’d never done that. Never watched someone or let someone watch him. The thought of having her eyes on him heightened the thrumming desire in his gut to almost unbearable levels.

His emotions were ping-ponging around, from giddiness to hair-on-fire lust. He couldn’t keep up with himself.

A small smile tripped across her face. “Hold that thought.”

“The Double Trouble. I’ve never tried this one. You can help me christen it.”

Sasha Holiday is so over the holidays after getting left at the altar last Christmas Eve. But as the marketing maven for Lady Robin’s Intimate Implements, she’s stuck not-so-merrily pitching naughty toys at a romance book club’s Christmas party. Her loathing of the yuletide only intensifies as a snowstorm rolls in and traps her at the Winterberry Inn. Stranded with her is Perry Winters—a hot bearded book club member trimmed in flannel and tattoos.

Perry’s a romantic with an unerring belief in the magic of the season, and he recognizes a Christmas miracle when he sees it. Brave, smart, and confident—Sasha Holiday is a gift. And the gifts keep coming when she suggests they pass the time with some no-strings fun. After all, she has a big bag of toys that would make even Santa want to stay in bed on Christmas Eve.

But the frisky festivities turn complicated as feelings spark between Sasha and Perry. Perry wants to see Sasha once the snow clears, but Sasha is reluctant to take the relationship sleigh ride again. Perry will have to show her that love is more than just a holiday feeling. 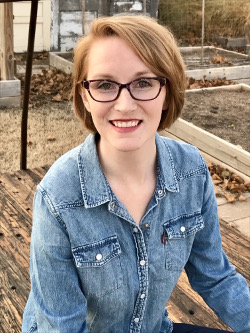 Erin McLellan is the author of several contemporary romances, all of which have characters who are complex, goodhearted, and a little quirky. She likes her stories to have a sexy spark and a happily ever after. Originally from Oklahoma, she currently lives in Alaska and spends her time dreaming up love stories set in the Great Plains. She is a lover of chocolate, college sports, antiquing, Dr Pepper, and binge-worthy TV shows. Erin is a member of Romance Writers of America and its Alaska chapter.

Erin McLellan is celebrating the release of STOCKING STUFFERS with a giveaway featuring (1) backlist e-copy of any of her books and (1) bookplate + bookmark! Must be 18 to enter and win. Open internationally.