Changing Lanes, my sports romance duology kicking off this week with RELAY, follows the lives, loves and training of four Olympic swimmers. I’m in no way the first to go here. The Olympics have long been a popular backdrop of books, television, and movies. These are just a few of my favorites, ironically, all featuring winter sports on ice!

The Cutting Edge – I lost count of how many time I snuck into the theater to see it (because I was a year shy of PG-13), and don’t even ask me how worn out the VHS tape and DVD were before I sucked it up and bought the digital copy. I regularly quote it. My husband expects this; he even knows not to turn it if it’s on TV. As good as a marriage vow. So many of my favorite tropes – enemies to lovers, forced proximity, opposites attract – are wrapped up in his ice skating classic. TOE PICK!

Blades of Glory – It’s totally ridiculous and absolutely hilarious, but Will Farrell and Jon Heder play off of each other so well.  There’s a great enemies-to-friends story at its base, and you can’t help but smile and root for the underdogs.

Miracle – I’m probably going to lose half my writing friends here, but truth be told, I’m not a fan of hockey. The Carolina Hurricanes didn’t move to town until I was in college, and the hockey in warm places thing always throws me. But this movie, about the 1980 US Men’s Hockey Team that stunned the world and won gold, is like the Hoosiers of hockey movies. It delivers all those exciting, nerve-wracking feels, and Kurt Russell as the coach is perfect!

Captain is not a title Alejandro “Alex” Cantu takes lightly. Elected by his teammates to helm the US Men’s Swim Team, he proudly accepts the role, despite juggling endless training, team administrative work, and helping out on the family farm. And despite his ex-lover, Dane Ellis—swimming’s biggest star—also making the Olympic Team.

Dane has been a pawn in his celebrity parents’ empire from crib to pool, flashing his camera-ready smile on demand and staying deeply in the closet. Only once did he drop the act—the summer he fell in love with Alex. Ten years later, Dane longs to cut his parents’ strings, drop his too-bright smile, and beg Alex for another chance.

Alex, though, isn’t ready to forgive and forget, and Dane is a distraction he doesn’t need on his team, until an injury forces Alex to accept Dane as his medley relay anchor. Working together, their passion reignites. When Dane’s parents threaten reprisal and Alex is accused of doping, the two must risk everything to prove Alex’s innocence, to love one another, and to win back their spots on the team, together. 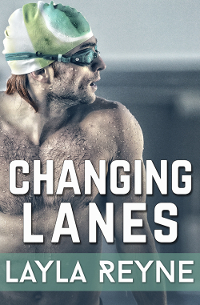 A chance at gold or a chance at love? Members of the US Men’s Swim Team fight for both in this sports romance duology following two couples on one medley relay team as they train and compete in the world’s biggest sporting event: the Olympics. To reach the top of the podium, they’ll need to depend on one another and be willing to change lanes—in their lives and hearts, and in the biggest race of their athletic careers.

2016 RWA® Golden Heart® Finalist Layla Reyne was raised in North Carolina and now calls San Francisco home. She enjoys weaving her bicoastal experiences into her stories, along with adrenaline-fueled suspense and heart-pounding romance. When she’s not writing stories to excite her readers, she downloads too many books, watches too much television, and cooks too much food with her scientist husband, much to the delight of their smushed-face, leftover-loving dogs.

To celebrate the release of Relay, one lucky winner will receive a signed paperback copy of the book and a $25 Amazon gift card! Leave a comment with your contact info to enter the contest. Entries close at midnight, Eastern time, on January 13, 2018. Contest is NOT restricted to U.S. entries. Thanks for following the tour, and don’t forget to leave your contact info!