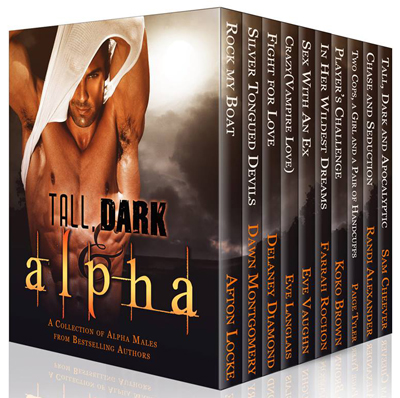 Thank you for hosting us today. We’re excited to talk about the alpha trait decisiveness and our stories for the boxed set Tall, Dark & Alpha as we try to figure out: what IS alpha?

An Alpha is Decisive

The alpha man doesn’t hem and haw. He always knows exactly what he wants and he makes sure everyone else knows it too.

The alpha hero in Chase and Seduction: Hot Country Series, Book 1 by Randi Alexander, a contemporary romance, is a musician. Country western singer Chase Tanner knows that when the movie he’s filming with screenwriter Reno Linden is finished, she’s going to disappear from his life. At the wrap party, he makes his move on her, publicly and sensually, and invites her to stay the night with him. (Come backstage and get your hands on country superstar Chase Tanner!)

In Tall, Dark & Apocalyptic by Sam Cheever, a paranormal romance, the alpha hero is a bounty hunter. Audie decides things well, firmly, and quickly. Then fate steps in and laughs at Audie’s decisions. (A grand passion in an apocalyptic world. A love beyond reason and without boundaries.)

The alpha hero in Rock My Boat by Afton Locke, a paranormal romance, is a shape shifter. As soon as Simon knows he wants Rhonda, he goes after her. They might be on a big ship, but he manages to track down the mate of his dreams in a variety of sexy settings. (Once addicted to the sea, you can’t escape its pleasures.)

Silver Tongued Devils by Dawn Montgomery, a sci-fi romance, has two alpha heroes. Captain Na’varr wants Raesa. Once he makes his decision, he’ll overcome any obstacle in their way. Brom Raine was born a hybrid, less than human. When he was freed from slavery by Captain Na’varr, he swore he’d never allow another to take away his identity. He will protect Raesa, their woman, from the hell he’d endured. (She was always one step from hell until she found redemption in their arms.)

In Fight for Love by Delaney Diamond, a contemporary romance, the alpha hero is a former professional wrestler. Rafael’s goal was to have his wife and son back in his life. To do that, he made plans to have them flown back to his home in LA where he could spend time with them both and woo Rebekah. (A former pro wrestler fights to hold onto the woman he lost, but still loves, and the son he never knew existed.)

The alpha hero in Crazy by Eve Langlais, a paranormal romance, is a vampire. Once Zane meets Ella, and she intrigues him, it doesn’t take him long to decide he needs to bring her home and explore her mind—and body. (Ella hears voices and they don’t like anyone.)

In Sex With an Ex by Eve Vaughn, a contemporary romance, the alpha hero is a lawyer. Ethan Boudreaux knows what he wants takes the precise steps to go get them. When he makes a decision, he rarely strays from his path. (When two divorcees reunite in the bedroom, the sex is hotter than ever, but can their hearts survive the second time around?)

The alpha hero for In Her Wildest Dreams by Farrah Rochon is a CEO chocolatier. When it’s time for a decision to be made, Gavin makes it. His decisive nature is the hallmark of his success as a businessman and a lover. (When the woman of his dreams asks him to create a Valentine’s Day fantasy, Gavin plans to show her just how sweet their reality could be.)

*Releases March 8th from Amazon and other online retailers.*

He makes your heart pound and melts your resistance away. He promises you a world of passion and you find it impossible to resist his dark charm. When he catches your eye across the room, you know he means business. He could be an executive, cop, shape shifter, or a bad boy looking for a little fun. Once he has you in his sights, you can’t get away—and after one sizzling night in his arms, you won’t want to. He’s Tall, Dark & Alpha. The alpha male is the ultimate indulgence…the richest dark chocolate…and we’re offering him to you in abundance.

Featured Story – Two Cops, a Girl and a Pair of Handcuffs by Paige Tyler

She has the perfect opportunity to take them up on it when they offer to drive her home after work. What girl wouldn’t be thrilled at the idea of sleeping with two guys who come with their own handcuffs?

She put on her best sultry expression. “What did you have in mind?”

Reed grinned, but didn’t say anything. Instead, he slowly slid his hand down to his belt. For a moment, Cilla thought he’d changed his mind and was going to get undressed anyway, but he reached behind his back. She heard the sound of a snap popping, as if he’d opened something. When his hand came around again, he was holding a pair of handcuffs.

He let them dangle in front of her, a wickedly sexy grin on his handsome face. “You game, Cilla?”

The light in the living room glimmered off the cuffs and Cilla’s heart skipped a beat. Oh my…

She glanced over her shoulder and saw that Hayes was looking at her with just as much interest as Reed. She turned back and looked at the handcuffs again. Could she— should she—do this? She’d never done anything this remotely kinky before in her life, especially not with two guys she’d just gotten to know in the last two hours or so. Did she honestly want to let Hayes and Reed cuff her? She gave a mental shrug. Just seconds ago, she’d been ready to hop into bed with the two of them. She still was, meaning she obviously trusted them.

But boffing two guys was quite a bit different than letting them restrain her. She remembered the way she’d shivered earlier when Reed had glanced down at her wrists as they’d bantered about him handcuffing her. At the time, the fantasy had made her pussy purr. Now that she had a chance to experience it for real, was she willing to try it?

She stared at the shiny metal handcuffs, chewing on her lower as she tried to decide. Reed must have thought she wasn’t going to go for being cuffed because he dropped his hand to put the cuffs away.

She moved a step closer to him. Behind her, she felt Hayes close the distance between their bodies. He was standing so close, she could feel the heat coming off him.

She wet her lips nervously. “I’ve never done anything like this. What would it…entail?”

Reed gently cupped her cheek in his free hand, his thumb brushing her lips. “It would entail total trust on your part. Trust that we wouldn’t do anything you wouldn’t enjoy, and that we’d stop the second you decide we’re doing something you’d rather not.” He ran his thumb over her lips again, his touch so light she could barely feel it. “Is that a level of trust you can have with two men you’ve just met?”

Cilla gazed into Reed’s dark brown eyes and instinctively knew the answer to that question. “I trust you. I have no idea why I should—like you said, I just met you—but I do.”

Behind her, Hayes ran his fingers down her back all the way to her ass cheeks, leaving a tingle in their wake. “That’s good to hear. Because we’d never do anything you didn’t enjoy.”

Reed took one of her small hands in his large, rather rough one, then slowly and gently snapped the cuff around her wrist.

This post is part of the What IS Alpha? Blog Tour. 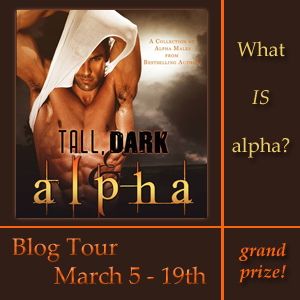 The grand prize for the tour is a $25 Amazon gift card.

The winner will be announced at http://www.aftonlocke.com/tdatour.html on March 20th.