Writing What I Don’t Know By Annabeth Leong

“Write what you know,” they tell you. They also told me, when I was young, that only bad girls play with cock (they didn’t quite put it that way). I confess, I’m breaking both rules these days, by writing erotica from a male point of view.

The adage to write what you know is a hard one to parse. My writing would be pretty boring if every character represented the same facet of me. On the other hand, I probably shouldn’t write a story set in Greece without at least cracking a book or two. There’s plenty of gray area in between.

Take the case of a male point of view. I like penises. I’ve played with my fair share. And I’m a human who doesn’t believe that men are from Mars and women are from Venus — we’re both from Earth, and we have a lot in common. I probably wouldn’t hesitate to write a non-erotic story from a man’s point of view. Erotica, on the other hand, intimidated me, since such an undertaking would necessitate describing how it feels to have a cock. 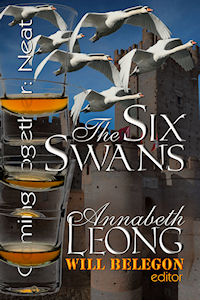 The Six Swans, my novella out from Coming Together: Neat, called for a male point of view. The story hinges on the secrets surrounding the mute female main character. When I decided to write it, I immediately ruled out telling it from both perspectives. I wanted to emphasize either the dilemma of not being able to speak what is known (the point of view of Leonora, the woman) or that of unraveling a tangle of secrets and deciding when to trust (the point of view of Evan, the man). The question of trust interested me more, so I had to write the story from inside the head of a man.

I used a few tricks to keep with what I do know. A lot of the descriptions of sex scenes focus on Evan’s impressions of Leonora, which I could write by thinking about what I like done to me and how I react when that happens. This mode actually worked well for me because, as a bit of an exhibitionist, I get turned on by thinking about how I look to my lover or how I’m being perceived. I have a lot of practice there.

At the first touch of his tongue to her budding cunt, the girl’s mouth went still on his cock. He nudged the hard nub of her arousal gently at first, placing his forearms inside her thighs to pin her legs open. When he felt her beginning to relax, he pressed his tongue harder against her, licking her slit from top to bottom, drawing a circle around her entrance and then trailing back up to her bud.

Her body surged into action. Her hands squeezed his buttocks, forcing his cock deeper into the slick heat of her mouth, her tongue stroking it wildly. She continued to drag him into her, pushing easily past his feeble ability to resist her. He gasped her name and sucked her bud into his mouth in turn.

There were still times I couldn’t get around writing about what I didn’t know:

He grasped his cock and found her entrance, closing his eyes and hissing at the warm wetness there.

The sensation made it impossible for him to hold back any longer, and he pressed through her barrier, nearly sobbing as he felt how closely her body gripped him. Her inner muscles pulsed madly around his intruding cock, and Evan buried his face against her and bit the spot where her collar bone met her throat.

For a moment, she went stiff and tight beneath him, sending another wild shiver through his cock and up his spine. Then she opened to him again. He began to guide himself in and out of her body, as gently as he could manage.

I did run the story by a few men — I was lucky to have the excellent Will Belegon as my editor, for example. After those checks, I figured I hadn’t committed any truly egregious misrepresentations of the penis-having population.

I find myself sliding into the male point of view more often now. Stories sometimes call for it, either for narrative reasons like what I described above, or because I get caught up in that exhibitionist thing I mentioned.

I think that exhibitionist thrill gives the key to how I’d change that old piece of writing advice. It’s not “write what you know” as in “stick exactly to things you’re entirely confident about.” I think it’s “write what you know” as in “identify what you do understand about any situation that comes up in your writing and use it as your foundation.” My experience of the male gaze is the foundation of my efforts to write from the male point of view.

Want to see for yourself whether the effort succeeded? You can buy The Six Swans here: http://www.eroticanthology.com/neat%20%28Annabeth%20Leong%29.htm

I’d love to know what you thought.

You can find me on Twitter @Annabeth Leong or at my blog, Robot Lovers Prey on the Lonely: http://annabethleong.blogspot.com