Think of your favorite story from childhood and invariably along with the characters you remember the setting.  Where a story takes place can be just as important as the plot and characters.  When I write, the setting often becomes one of the characters.  In Blood Avenged, the great city of New Orleans helps to give the story a dark and spicy feel.

I was fortunate to be able to do on-site research for Blood Avenged when I attended the Anne Rice Vampire Lestat Ball last October.  I’d always wanted to visit The Big Easy, and right after I began plotting the story, I found out I’d be attending the ball on Halloween weekend, a great time to visit New Orleans.  Immediately, I knew I had to chance the setting to that incredible city, and my visit there showed me I’d made the right choice. Each scene in the book that takes place in New Orleans includes a location I visited and enjoyed.

One of my favorite scenes to write was the one that takes place in the cemetery between the hero, Vasilije, the heroine, Sasa, and the story’s villain, Tatiana.  Set in the actual Cypress Grove Cemetery, it’s a great scene that was truly inspired by the wonderfully historical feeling the place has.  I’d visited a number of cemeteries around it on Canal Street, but Cypress Grove just had a great vibe that I could imagine for the climax of the story. 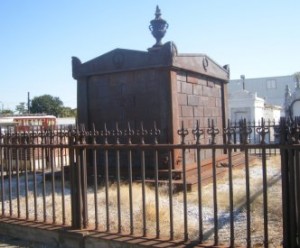 As soon as I entered the cemetery, I saw a crypt that stuck out among all the others.  While the rest around it were white stone or marble, this one was a dark brown metal. I immediately took a bunch of pictures from every angle imaginable because I knew it would be a great image to depict in the cemetery scene.  In the end, I ended up using it as Tatiana’s perch where she stands taunting Vasilije and threatening Sasa’s life. 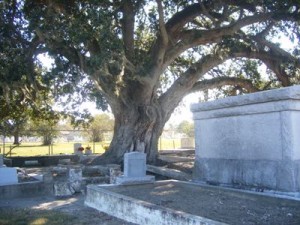 Another spot in the cemetery has an enormous tree, and I was drawn toward it as I imagined the beginning of the story’s climax there.  This tree dominates the end of the cemetery, and its roots have begun to dislodge some of the tombs around it.  Even as I stood there during the sun of the early afternoon, I could see my characters there.

And then as I walked back toward the entrance to the cemetery, I saw a tomb that had a very Eastern European feel to it.  Since Vasilije is the son of an Eastern European prince from the 1500s, I thought it would work well to end the scene.  Again, I took dozens of pictures from all angles and by the time I walked away, I knew exactly how the scene would end there.

Choosing a setting is very important to me because it can help set the tone for the story. New Orleans was far more than the Cypress Grove Cemetery, of course.  I enjoyed the French Quarter and set a scene where Vasilije and Sasa meet a vampire leader in that area, along with the voodoo woman’s shop that’s a few streets off Bourbon Street.  And the house where Vasilije stays while he’s in New Orleans was set in the Garden District, away from all the hustle and bustle of the Quarter, giving the scenes between him and Sasa a quieter sense.  I can only hope I get to do more on-site research for my books in the Sons of Navarus series.  Unfortunately, I wasn’t able to go to France where the next book, Blood Betrayed, is set, but I might have the opportunity to go to Spain and Morocco where the third book, Blood Spirit will be set.  I can only hope.

Thank you to Lucy for hosting me on Blood Avenged’s book tour.  It’s been great to be here at Erotica For All! 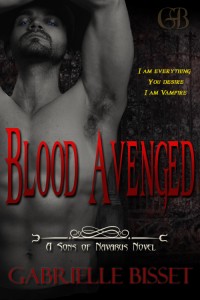 I am everything you desire. I am vampire.

Powerful and manipulative, Vasilije does as he pleases. A vampire beholden to no one, he takes what he desires, drinking deeply the pleasures this life has to offer.

When one of his own is staked, Vasilije must travel to New Orleans to exact his revenge. There he meets Sasa, a beautiful woman who arouses him like no other has for centuries. Vasilije’s need for vengeance is equaled only by his passion for her, but what he finds in his revenge is just the beginning…

Through the tightly packed crowd, he saw the woman next to his target lean over, obscuring his view. He watched as she pressed her body next to the man’s, a not-so-subtle hint to her interest.

The sweet scent remained, and Vasilije closed his eyes to enjoy it, not interested in the woman or her pathetic attempt to seduce his prey away.

He had no idea the vampire waited patiently for his moment. Vasilije liked the idea that ignorance was bliss. For now. In a few short minutes, another bliss would take them both over, and he’d have what he’d eyed for days.

The man made a move toward the door and every cell in Vasilije’s body came alive. Two steps and he was in the thick of the crowd, their bodies pressing up against his as he brushed by them. He weaved through the group like a dark secret whispered from one person to another.

At the exit, he inhaled deeply, his sense of smell filtering out the putrid mixture of exhaust, perfume, and stale alcohol that hovered at the entrance to the street. Only his prey’s scent remained, imprinted on him.

Closing his eyes, Vasilije let his other senses take over. The sound of the man’s shoes hitting the pavement echoed in his ears. The feel of his prey’s blood pumping through his body throbbed against Vasilije’s cool skin, matching his heartbeat.

So healthy. So alive.

He’d tracked him for days, his desire growing with each passing moment. It had taken little time for him to decide he would make him one of his kind. He stirred something inside that hadn’t been touched for years.

Such a soul would be a perfect addition to his world. 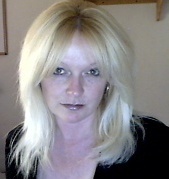 Gabrielle will be giving away signed bookmarks from Blood Avenged and the upcoming books Blood Betrayed and Blood Spirit at each tour stop and a $10 gift card for one randomly drawn commenter. Don’t forget to follow the tour and comment; the more you comment, the better your chances of winning. The tour dates can be found here:  http://goddessfishpromotions.blogspot.com/2012/03/virtual-book-tour-blood-avenged-by.html