Thank you, Lucy, for having me back at Erotica For All to celebrate the release of the third book in my Sons of Navarus series, Blood Spirit. And the celebration doesn’t stop until the last day of October. All month the Blood Spirit/Sons of Navarus Paranormal Fall Fling giveaway has weekly prizes along with grand prizes of gift cards, ebooks, and cool Sons of Navarus swag at the end of the fling. Be sure to keep reading after the post for details on how to enter!

Years ago, I wrote a novel set in part in Morocco. I’d seen a few pictures of Marrakech and fell in love with it. That book remains unpublished, but when I began thinking about places where I wanted to set Blood Spirit, the beautiful country of Morocco came to mind immediately. While the majority of the story is set in Spain (another very beautiful location), Morocco is the backdrop for some of the most romantic parts of the story.

Terek takes Ilona to the city of Marrakech and an incredible hotel, the Grand Palace. Because of copyright issues, I couldn’t use the name of the actual hotel I based the Grand Palace on, La Mamounia. A five star luxury hotel, it’s the perfect place for a man to show a woman how much he loves her. As much as I wish I could have included more about the hotel, however, it’s what happens at the hotel between the two that’s key. 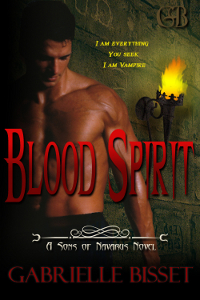 Here’s an exclusive excerpt from their time in Marrakech:

“Oh my God…Terek,” she said in amazement as he gently guided her in and closed the door behind her.

The Travel Channel hadn’t done it justice. Ilona’s eyes traveled up the delicately etched walls to the ceiling made from wood beams that had been stained the deepest mahogany color. The effect was breathtaking in its beauty.

Wood doors with intricately carved panels flanked a Moorish archway that led to the bedroom and balcony that overlooked the gardens below. Ilona walked into the bedroom only to find more grandeur there. Behind the king sized bed hung deep orange curtains, accented by a dark wood headboard that reached halfway up the wall toward the ten foot ceiling.

Terek followed behind her explaining the architecture’s history. Turning, she watched his happiness blossom. “Have you lived in this country?”

“No, but my sire brought me toMoroccoand I fell in love with it.”

As Ilona continued to look in amazement at their suite, she asked, “Did he bring you here?”

Terek walked past her seemingly unfazed by the beauty all around him and headed for the balcony. “No. He was gone long before this hotel existed.”

Ilona followed him outside onto the balcony and stood silently in awe of the vision before her. The night sky was purple and magenta above the gardens lit up for evening walks. Palm trees illuminated from the ground stood tall enough to touch the stars that seemed to hang from the sky.

“It’s one of the most beautiful places on Earth,” Terek said in a faraway voice.

“I’ve never been out ofSpain, except once to visit where my mother grew up, but I’ve never seen anything like this.”

As he stared off in the distance, he said, “I was very fortunate. Amir introduced me to things I’d never have seen if he hadn’t made me vampire.”

This is what he’d meant in the courtyard at his home the night before. This was what he wanted to give her, and she’d refused it without a second thought.

Ilona cringed at the memory of her callousness. She’d been so sure she didn’t want to be his vampire, she’d never taken into account everything he could show her of their world.

Ilona laid on the bed and watched Terek as he stood in the doorway. Had she ever really looked at him for who he truly was? Standing there on their private balcony at one of the most incredible places on Earth, he looked so much more than the man she’d considered him to be.

His dark hair rested along the collar of his white shirt that made his olive skin seem even darker. He had an exotic look to him, she thought, as he stood there, his back to her, seemingly lost in thought. Ilona watched him unbutton his shirt and shrug out of it to reveal his muscular torso. His back and shoulders looked knotted, and she frowned at the idea that she was a part of the stress taking its toll on his body.

The urge to fix some of the unhappiness she’d caused him pressed on her heart, and she slowly padded up behind him. Unsure of his reaction, she tentatively slid her hands across the smooth skin of his back and over his broad shoulders to gently knead his tired muscles.

He exhaled and moaned softly as her hands pushed what she’d done out of his body. Inch by inch, his muscles relaxed under her touch and for the first time since he’d saved her life, she didn’t fear being close to him.

She put her arms around him and rubbed her palms over his chest. He was toned and hard under her hands, and as they trailed down to his abs, she let herself truly relax, pressing her cheek to his back.

“I have no idea what you’re thinking,” he said quietly as he continued to stare out into the night.

His hands covered hers on his ribs and he sighed like a man ready to give up. “I don’t know how to reach you. I have so much I want to give you, but I can’t seem to convince you to accept me.”

Thanks again to Lucy for having me here today, and I hope readers will stop over at my blog to enter the Paranormal Fall Fling giveaway. There are weekly prizes and grand prizes at the end of the fling with gift cards, ebooks, and cool Sons of Navarus swag. Visit http://gbisset.blogspot.com/p/paranormal-fall-fling.html to enter!