Thank you Lucy for having me back here once again at Erotica For All. What a great place to visit once again! 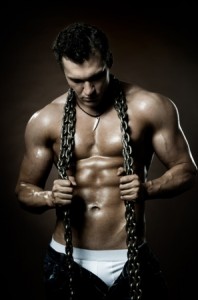 Ramiel, the hero of my upcoming fourth novel in the Sons series, Blood Prophecy, sees sex in a raw way. He’s the most violent of the Sons, and this hardness comes through in his relationships with women. He’s not exactly a Dom, but he’s definitely dominant. Here’s a little taste of Ramiel with one of his vampires, Larissa:

Raising his arm, he positioned his hand to knock on the door but stopped. He didn’t want to do the “How you been?” thing, wasting time on unnecessary pleasantries. Larissa never liked all that shit either. That was one of the best things about her.

No. What he wanted was more raw, more pure.

Concentrating, he felt her inside and focused his energy on hers. A vampire like him, she would know he was there before he appeared. She always did. But that was part of the game they played.

In the blink of an eye, he was standing behind her, inches away from the body that would bring him such pleasure. Long blond hair fell toward her waist in loose waves he’d soon tug on. No woman was supposed to have a body like this. Nearly as tall as he, her legs went on forever, stopped only by the most perfect ass. He had no idea who she fucked when he wasn’t around, but he was sure they’d taken that ass. As he slid his gaze over those firm, round globes, he could certainly understand why a man would enjoy it.

He reached over to a dresser where a blindfold lay waiting. The feel of the red silk on his fingertips excited him, and he cupped his balls and stiff cock trying to find a more comfortable position for them. It was no use. Her naked body beckoned, and he rid himself of his clothes in seconds.

“I knew you would come tonight. I dreamed about it today,” she whispered as she remained face forward with her back to him.

As he tied the blindfold around her head, he bent down to kiss her ear. “You know what happens when you talk before I say so, Larissa.”

She knew. She did it on purpose. She liked what he did when she misbehaved. Not exactly submissive, Larissa liked it rough.

This was Larissa—hot, excited, and sexy as hell.

Tugging again much harder, he brought her head back until it fell against his chest. He imagined those soft brown eyes filled with tears behind the blindfold, but if she wanted it softer and sweeter, she didn’t act like it as she wriggled to rub against his stiff cock.

“Tell me how I fucked you in your dream.”

He released her hair to slide his hands around to palm two full breasts. Pert nipples stood excited by his touch, and he pinched them between his thumbs and forefingers. Larissa remained silent, except for a needy moan. Two hard squeezes of those pretty pink nipples and he reminded her of who had the control.

“Larissa, I know you heard me. Now tell me how I fucked you in your dream.”

Just as he liked it.

“And without my blindfold.”

That would never happen. She’d never seen what he looked like, not even that first night when he’d met her at a club in Frankfurt. In the dark, as the crowd watched an old vamp sex show that should have closed down centuries earlier, he’d spotted her, innocent looking with eyes wide with arousal as the bodies writhed against one another on the floor in front of them. Pressing against her back, he’d held her jaw tightly, forcing her to watch the scene playing out before them as he pushed under her skirt to her drenched entrance before backing away, sure she wanted him as much as he wanted her.

He’d been right. That night they’d lost themselves in one another, a man in need of a particular kind of release and a woman who unlike most of her sex enjoyed what he demanded without fear or guilt.

Since then they’d given each other that harder pleasure, but never had she’d seen his face. Unlike the other Sons, he couldn’t trust anyone, not even one who’d proven her devotion to his happiness beyond a shadow of a doubt time and again. He had no idea how Thane handled his business, but this was the way he dealt with their responsibility.

Ramiel slid his hand up to clutch her throat and felt her pulse as it pounded against the pad of his thumb. “No.”

Turning in his hold, she faced him without saying a word and slowly lowered herself to her knees. Tilting her head up, she smiled and ran her tongue across her fangs.

Larissa gripped the base of his cock and squeezed as she guided it toward her mouth. Her lips encircled the swollen head, and Ramiel watched in awe at how beautiful the sight of her on her knees in front of him was.

Her tongue danced over his skin, performing its magic with a mere touch, and he struggled to keep his eyes from rolling back in ecstasy. He liked watching her mouth slide up and down his shaft, her cheeks hollowing as she took his entire length into her.

He didn’t want this to end just yet.

“Sire?” Larissa’s face turned up toward him, her lips in a tiny pout. “Is something wrong?”

No, there was nothing wrong. How could a gorgeous woman sucking his cock ever be wrong? But something in him needed more…something more raw. More savage.

Pulling her upright, he spun her around, ordering, “Hands on the table.” 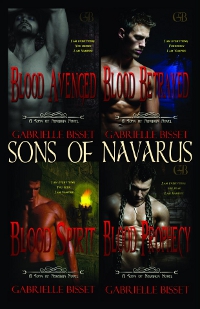 And now, readers can grab the first five chapters of Blood Prophecy for FREE! Find links and details at my website at www.gabriellebisset.com Thanks for having me here today! For more information on the Sons of Navarus series, readers can visit my website for excerpts, buy links, character profiles, swag (romance trading cards), and free desktop wallpapers to bring those delicious Sons to your computer. And look for Blood Prophecy coming soon!