If this is the first time hearing about the 1 Night Stand Series, then let me first give a little introduction.

The multi-author series is based around Madame Evangeline’s match-making skills. A woman to be reckoned with, and owner of a highly successful matchmaking service. She firmly believes if you put the right two people together for just one night, anything is possible. Especially when the dates take place at the fabulous Castillo Hotels and Resorts in some of the most exotic places in the world. There are sixty some stories in this series already, with more to follow. Each tale has been highly successful and has kept readers coming back for more!

But just who the heck is Madame Evangeline?

That’s the question I’m forever asked when I mention my latest releases are with the multi-author 1 Night Stand Series.

And as an author in this series, you’d think I’d know a thing or two about her by now. But she’s firmly weaved a trail of mystery behind her. She wants no one to discover her true identity, or so it seems, and that just gets me all the more curious.

Mysterious and often believed to be magical due to her impeccable match-making success rate, Madame Eve’s only contact with her clients is via email, text or fax. Oh and her online match-making site. We know she’s French. We know she has a business relationship with Jackson Castillo and family, who owns Castillo hotels and resorts. And we know she’s living at an undisclosed location…which isn’t France, by the way. We also know she’s often called Madame Eve for short.

1 Night Stand Authors, and readers, are a slave to Madame Eve’s web of mystery.

Just like the Angels, who only ever got to ‘hear’ Charlie, the 1NS authors find themselves wondering what exactly does Eve look like? Who is she? And why is she so gawd damned good at what she does?

From the moment I started writing for this series, I couldn’t help but imagine  Madame Eve as Lesley Ann Down from her days as Madeline Fabray in North and South. But I doubt very much that is how she dresses, or behaves. No, I expect Madame Eve is sophisticated and spunky…and I bet she lives with an American rich hottie who wears designer suits 24/7, and I expect he’d be at her beck and call. Hey, maybe she date’s Jackson’s father? Then again, maybe not.

Speculation is all I can do, because that Madame Eve is impossible to track down. She’s covered all her bases. So until she’s ready to ‘out’ herself, readers and writers of the series will have to live like the Angels; in the dark. But isn’t that what’s so exciting about this series…the mystery of it all? And asking ourselves how on earth she manages to make such excellent matches when even her clients don’t even know what they want half the time.

One lucky commenter will win my ARe and BookStrand bestseller 1NS ebook, Sweet Irish Kiss which stars a sexy Irishman. I hear Madame Eve has one 😉 The book that is, not a sexy Irishman. Oh wait, she may have one those, too. We’ll never know. Or will we? Mwahaha. To be entered, please leave speculative comments about Madame Eve. Just who do you think she is, and how do you imagine her to look?

Dracula’s Kiss  – “ JoAnne Kenrick writes with passion and excitement. She brings her characters to life through lavish attention to emotions and character. She weaved a tale that entranced my imagination leaving me wanting more.” – Talina, Night Owl Romance TOP PICK

Cathela’s Office Halloween Ball is a complete bust. She spills out her Dracula’s Bride costume, and her vamp fetish chases away her boyfriend. Only redeeming feature to the night? Necking multiple shots of Dracula’s Kiss—a lush Black Cherry Vodka cocktail—and an interlude with a gorgeous man dressed Gary Oldman style.

No one comes close to satisfying Alec Murray’s needs until he meets Cathela during some lame-ass party for bankers. One taste of her blood, sweet yet darkly dangerous, he knows she’s perfect for him.

A night of goth bondage is planned for one. For the other, a night of sexual control is a must. A perfect fit. Alec is compelled to reveal his true nature, but can their relationship survive his dark secret?

Sweet Irish Kiss  – “True to the title Sweet Irish Kisses is a decadent treat that I savored from beginning to end. I devoured the novella like a box of chocolates with my name on it! I loved the characters, their pasts and the way their true selves enriched the story by adding depth to their romantic connection.” – Talina, Night Owl Romance

Shaun Bell, a divorced workaholic, spends all his time tending bar in his Irish Pub. He’s ready to love again, but the women who visit his bar are only after his infamous Irish cocktails. At the advice of his darts team over a tanker or two of Beamish, he applies to 1Night Stand to get back into the swing of things and enjoy the company of a woman specially selected for him by Madame Evangeline.

Rachel Taylor has issues. Her father broke her mother’s heart with his cheating and Rachel swore never to let that happen to her, but one ruined relationship after another and she’s realized she’s got to get over being closed off to men. Perhaps a one-night stand is just the baby step she needs to begin to build trust again.

A match seemingly made in heaven…until morning rolls around and Shaun can’t bring himself to say good-bye. Can he win her over with his secret weapon, a Sweet Irish Kiss, or is Rachel still too scared to love? 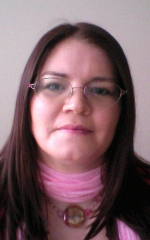 JoAnne Kenrick, an ex-Ghost Tour Guide turned Romance Author, is a Welsh lass who has lived in various countries around the world. She now calls North Carolina her home, where she lives with her husband, two children and a lazy cat. When they aren’t demanding her attention, she can most likely be found watching a vampire movie, reading or baking up a British favorite in her N.C. kitchen. That is, when she isn’t writing or chatting up a storm on social networking sites. www.joannekenrick.com