Bound by Lust… and Love

I don’t get a chance to write for too many calls for submissions anymore. Between editing my own anthologies for Cleis Press (http://www.cleispress.com/book_page.php?book_id=463),working on a dozen different projects at once and taking care of a couple of kiddos, I miss a lot of deadlines for terrific anthologies. Months later, when I see the covers of all those books, I kick myself for not squeezing in the time to write a story. Sigh… such are the lamentations of a busy writer-editor-mama.

But when I first heard about Shanna Germain’s call for Bound by Lust, I knew I had to write something for her call for submissions. Shanna is an amazing writer, editor and friend and I knew she’d put together a kick-ass anthology and I wanted to be a part of it. Plus, it had been awhile since I wrote a good bondage story and I already had an idea.

Writing, like life, is funny sometimes. What I had in my head wasn’t what came out on the page at all. Surprise! I ended up with an entirely different story than what I had originally intended. There aren’t any ropes or handcuffs or ties in “Brushstrokes”—in fact, it’s not really about physical bondage at all. But it is about being bound—to another person, to a way of thinking, to a need so great it can’t be restrained. It’s also about freedom—a woman’s need to be free from self-restraint and inhibition.

She held the paintbrush poised above the blank board.  “I need you to,” she wrote.  She couldn’t finish it.

She shook her head.  She couldn’t write it.

“Do you want me to leave you alone?”

She shook her head hard.

She wrote the words again.  “I need you to,” she wrote, hesitating once more.  “To have sex with me.”  It wasn’t right, but it was there.

He didn’t speak for a minute, and by the time he did her words were gone.  “You want me to make love to you?”  He sounded as confused as she felt.

She shook her head quickly.  “No,” she wrote.

She shook her head again.  Carefully, deliberately, she wrote, “Not make love.”

“You wrote you need me to have sex with you,” he said.  “But you don’t want me to make love to you.”

She waited for the words to fade.  Then quickly, before she could lose her nerve, she wrote in broad, heavy strokes, “Fuck me.”

She heard his quick intake of breath.  She had never used that word until now.  “Okay.”

She smiled.  He sounded shaken.  Rattled.  The way he made her feel sometimes.  It gave her an odd sense of power.  “Fuck me,” she wrote again. “Hard.”

His breathing had quickened, his fingers tightening on her shoulders.  “Are you sure?”

She nodded even as she wrote.  “Hard. Rough.”

He caught her hair up in his hand, dragging his fingers through it so that her scalp tingled.  “Hard, rough,” he repeated, his voice deepening. Collecting her hair again, he gave it a sharp tug.  “Like this?”

Mai Ling gasped. “Oh yes,” she said aloud, no need to write her desire on the board.  “Please.”

He pulled her up by her hair, twisting it so that she turned to face him.  She was nearly a foot shorter than him and he pulled her hair so that she had to look up at him. Neck arched, eyes wide, she stared into a face that was both familiar and unfamiliar.

“Tell me, Mai Ling,” he whispered. He studied her, his face set in solemn lines. “I want to hear the words.”

She tried to duck her head away from his unrelenting gaze, but he held her hair fast. “I can’t,” she whispered, even softer than him.  “I can’t.”

Tears pricked her eyes, fear that failing his test meant he would give up. And that would be the end of them.  Instead, he nodded. 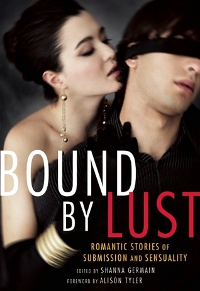 Like the subtitle of the anthology says, Bound by Lust is a collection of romantic stories of submission and sensuality and “Brushstrokes” is a love story. There is nothing hotter than two people who can connect on a physical and emotional level and Mai Ling finds in Gregory that connections, and submission, she longs for.

Oh, and I wasn’t wrong—Shanna has definitely compiled a kiss-ass anthology and I’m thrilled to be a part of the collection. And this time, when I saw the beautiful cover of a sexy anthology, I was very, very pleased to say, “I have a story in there!”