Portland carries a little bit of the weird and crazy. A popular bumper sticker on thousands of cars says “Keep Portland Weird.” We pride ourselves on our eccentricity; our biking riding, coffee drinking, garbage recycling, organic ways.

One would think stories about magic and shape-shifting dragons and the women who fall in love with them would fit right in. Certainly that’s what I thought when I moved to Portland in 2005 and feasted on the visual treats of the downtown cityscape. The old steel bridges with their antiquated draw bridge lifts still functioning after a hundred years. The picturesque rivers. The turn-of-the-century brick buildings. Beautiful and utterly conducive to romantic stories.

Below ground are the shanghai tunnels from the late 1800’s, running under the waterfront, full of stories and history. Who wouldn’t imagine a vampire living there, hidden from the modern world in a dark tunnel that’s been forgotten? Vampires and tunnels and lush Pacific Northwest greenery led naturally to dragons. At least for this obsessed writer. Because I am a dragon.

Oh, well, if you insist on complete honesty, I was born in the year of the dragon. Doesn’t that mean I have the dragon spirit? It is said that the Dragon is one of the most powerful and lucky Signs of the Chinese Zodiac. Dragons possess a certain natural, charming charisma that ensures they can always influence their peers and often find themselves the center of attention in social situations. Dragons are considered to be very lucky in love…I like this horoscope. And it’s the best reason I can give about why I’m so crazy about these mythic creatures.

So perhaps you can understand why I, the dragon-woman-writer, looked at the Fremont bridge with its soaring white span over the Willamette river and visualized a fire breathing, roaring dragon. Of course.

My dragon had to have a clan. A family. Thus were born the “Draca”. Clever, uber sexy, yearning, playful and passionate Draca.  They needed a queen of some sort so I called her Nareen and she casts the powerful and slightly untamed spells that drive the magical events of both my books.

My heroines you ask? They live in Portland, of course. And they carry a little something extra in their blood that make the Draca go a bit crazy.

There had to be sex. Hot, hot sex with the women who have not yet discovered their full sensual potential and the Dracan men– who initiate them into something that their wildest dreams could not have imagined…At some point, I slipped into a fevered brain kind of writing. How taboo would it be to feature interspecies sensuality? How far could I go?

The Draca continue to scheme and love in my newly released novella, ‘Cara and the Draca.’  Book three in my series “Daughters of Draca’ is currently in production, inspired as always, by the lights and marvels of Portland.

Thank you so much for hosting me today.

Lydia has no idea why an entire race of shape-shifters is lusting after her. They tell her there’s something special about her blood and they want it for themselves… but they don’t actually want her blood. No, they want much, much more. And they want it delivered fresh, hot and as fast as possible.

Science fiction geek Lydia Neal is just recovering from her latest relationship burnout. When she wakes up in a glowing cave surrounded by enormous dragons she’s pretty sure she’s having a sci-fi themed nightmare. Then she meets the smoking hot Draca Eremon and suddenly things aren’t quite so scary. Especially when Eremon shows her the very special kind of ecstasy a Draca male can offer her…whether on the ground or in the skies. 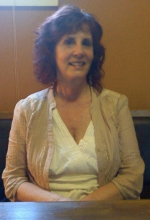 Romance and science fiction took hold of Louisa Kelley at age nine, when she read Little Women and the Narnia series.  She is convinced that the genre paranormal romance, which developed years later, was purely for her benefit.  After all, it’s what’s been in her heart all these years. She resides in Portland Oregon where, in a strangely perfect combination of rainy winters and urban skyline, her writing inspiration abounds.

Louisa will be giving away a $25 Amazon.com GC to one randomly drawn commenter during the tour. Follow the tour and comment; the more you comment, the better your chances of winning. The tour dates can be found here: http://goddessfishpromotions.blogspot.com/2012/01/virtual-book-tour-daughters-of-draca.html