I think if you ask most writers, they’ll tell you that they don’t know where their ideas come from. That was true for me when I first came up with the Westervelt Wolves.

I had been reading a lot of Paranormal Romance and I knew I loved the genre.  But I hadn’t expected to come up with the idea for Westervelt. I’d been writing my series the Outsiders up to that point and I hadn’t been prepared for a whole new series to present itself to me.

But I loved writing it.  I love it the way I love my children. It’s mine.  I love that they are both human and men.  I love how complex and wounded they can be and still be Alphas.  I love how they see the world and I love how it feels to write them.

Rex Kane has always known he was different than his brothers, down to the fact that when he shifts into his wolf form, his coat is completely black. Always in trouble, he is given one more chance by his brother Tristan, the Alpha of the Westervelt pack, to bring back to their island a witch who can stop some of the magical assault that has plagued their war-torn home. Rex knows he has one last chance to set things right. Everything depends on him and he cannot fail.

Elizabeth Willow has been cursed to look so repulsive no human eyes can bear to view her. Raised in a gentle coven of witches, she is ill prepared for the realities of the harsh world she now lives in. Raised to mistrust wolf-shifters as witch-killers, she cannot seem to help being drawn to Rex. Even if she doesn’t believe she is his so-called mate. He can see her as she really is and is the first person to look her in the eyes in years. Although she is not naturally devious, she sees no choice but to use Rex to gain her own freedom and her families’ safety.

Together, Rex and Elizabeth will see just how evil the people around them can be. If they can trust their hearts, perhaps they will survive another night. If not, both of their battles will never be won. 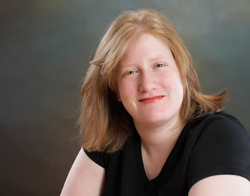 As a teenager, Rebecca Royce would hide in her room to read her favorite romance novels when she was supposed to be doing her homework. She hopes, these days, that her parents think it was well worth it.

Rebecca is the mother of three adorable boys and is fortunate to be married to her best friend. They live in northern New Jersey and try not to freeze too badly during the winter months.

She’s in love with science fiction, fantasy, and the paranormal and tries to use all of these elements in her writing. She’s been told she’s a little bloodthirsty so she hopes that when you read her work you’ll enjoy the action packed ride that always ends in romance. Rebecca loves to write series because she loves to see characters develop over time and it always makes her happy to see her favorite characters make guest appearances in other books.

In Rebecca Royce’s world anything is possible, anything can happen, and you should suspect that it will.

Rebecca will be giving away a $50 Amazon.com gift certificate to one randomly drawn commenter during the tour. So make sure to follow the tour and comment; the more you comment, the better your chances of winning. The tour dates can be found here:  http://goddessfishpromotions.blogspot.com/2012/03/virtual-book-tour-darkest-wolf-by.html