When a Man Meets a Woman

One of the most popular scenes in my new release Ready for Him is the scene where my hero and heroine meet for the first time.

Jade Bleecker, tattooed and pierced martial artist more used to scaring men than charming them, is in Las Vegas for the triple wedding of her three best friends. Having spent the evening drinking in the hotel bar and occasionally eyeing the hot blond man in the corner, as she leaves to go upstairs she interrupts a mugging in progress – the cute object of her fantasies, Will, is pinned against the wall with a knife to his throat.

The way a hero and heroine meet sets the dynamic for their entire relationship. When Ash and Astra first met in The Hand He Dealt, Astra’s rejection of Ash’s advances led to the adversarial tone of their subsequent meetings, an atmosphere of (alleged) mutual dislike which gradually changed over the course of the story. In Ready for Him, Will – a self-avowed dominant – is confronted with the most unlikely woman to ever become a submissive, yet finds himself irresistibly attracted to her. He wants to dominate her, yet at the same time he wants an equal.

“Don’t worry, you’re in no danger here. I’m putting the suite under lockdown. It’s not the first time this has happened, and I won’t have any more innocent rescuers hurt in retaliation. Bryn and Matt have radioed my team and they’re dealing with it.”

Jade screwed her eyes shut for a moment, forcing herself to calm down.

Okay. I don’t like it, but he’s right. Shit, what have I got myself into?

“Relax,” said Will, and Jade opened her eyes again to glare at him. “You’re safe with me. Despite what you may have heard.”

And Jade’s stomach spiralled as she remembered the other, less-publicised aspect of Will Vandenmeer.

Will Vandenmeer was a dominant, and didn’t care who knew it.

‘You’re safe with me’. Will was holding her gaze now, and Jade refused to look away, although her body was rebelling against her—torn between the flutter of nerves in her gut and a stab of desire in her cunt.

Or maybe she didn’t want to be.

“Okay. Tell me what you know about me.”

Jade’s fingers involuntarily clenched around the stem of her glass.

“Wait.” Will picked up his own glass, holding his other hand out as though calming a spooked horse. “Scrap that for now. Let me tell you what I’m getting from you.”

Oh really? Jade raised one pierced eyebrow at him.

Jade nodded slowly. Where are you going with this?

“Right. And you’re curious about it.” Will was watching her very closely as he spoke, and Jade held herself very still. “But you think it means all the worst things people say. You think dominants beat their submissives down, that we don’t give a damn about their pleasure, that we expect them to give up everything for our benefit. Right?”

I’m not telling you anything. Jade could feel her face falling into a mask. If Will noticed, he made no comment.

Silence fell between them.

“What would you say if I offered to—”

“Wait.” Jade held up a hand, cursing inwardly as she realised it was trembling.

What the hell am I doing?

You want this, a voice taunted in her head.

But the image from the bar of herself held down, tied down, putting all her trust in one man, still flickered in her head, and something inside her was urging her forward.

“Tell me what you’re thinking,” Will said, breaking into her thoughts, and Jade found herself answering without thinking.

“That doesn’t matter. I couldn’t.”

“Because I don’t trust any man with my body.” Jade snapped her mouth shut abruptly, hating the look that had come into Will’s eyes at the words.

Because I’ve been fucked over before. Because I’m a screw-up. Because I don’t need your fucking pity. Go to hell.

“That’s actually a very good reason why you could.”

Jade looked up at him, torn between curiosity and defiance.

“What does that mean?”

Will tilted his head to one side, looking her up and down. “You look like a person who might like dangerous sports. Think of bungee jumping. The danger is what attracts people, but any reputable company has a thousand regulations in place before they let anyone do it, precisely because of that danger. Right?

“Not everyone uses contracts, but even without them, limits and boundaries are agreed beforehand. So are safewords. The universal word is ‘red’, but many people choose their own. If I did anything to you that you didn’t want, you would use your word and I would stop—no questions asked. The trust is absolute.”

Jade reached for her drink, but her hand was shaking, and hastily she put it back on the table. As if he could tell what she was feeling, Will’s voice took on a seductive quality, and Jade bit down on her lip as a rush of desire flashed through her body.

The thought made her catch her breath. Immediately Will’s eyes were on hers, and Jade found it impossible to look away.

“Do you still think you couldn’t do it?”

Will arched an eyebrow. “Would you like me to show you?”

“Yes,” Jade heard herself saying, unable to drag her gaze away from Will’s. He smiled. 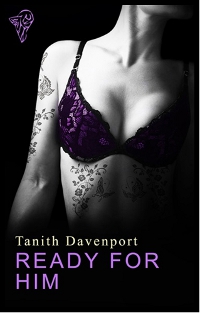 In the bar at the Bellagio in Las Vegas, Jade Bleecker celebrates with her three best friends, all of whom are there to get married – Jade is their bridesmaid, and beginning to believe that three times a bridesmaid really does mean never a bride. Tattooed, pierced and a martial artist, Jade is used to inspiring fear rather than desire in men, and even if she did find one who could handle her – well, no man is worth trusting with her body.