I love visiting casinos. My husband is addicted to slot machines, which gives me time to roam around and watch other people as they play. Before I wrote The Hand He Dealt I knew quite a bit from watching but very little of the realities of working in a casino, so I had to put my student hat back on and get into some research.

A lot of my research for books is just plain weird. People who know me are used to hearing that I’m looking up how fast a boat could go across the Mediterranean, or whether you would use a pike or a spear to stab someone. Casino management was probably the most normal research I’ve ever done, and certainly the only kind that I could apply in real life (probably a good thing, in the case of the spear).

I live in the UK, for a start, whereas the story is set in the US. Gambling laws – agh! Fortunately I managed to land on a few states where gambling is legal, although I gather Indian reservations may have casinos as well.  Also fortunately I managed to land on a college course that worked perfectly and included an internship exactly as I wanted – frankly, I’m not sure why it took me so long to find it, given that it was in a fairly obvious location. J The college website had all the details as to which roles an intern might be asked to take on and might move into after graduation, as well as which modules they might take; I’m sure this is all obvious to American readers, but trying to wrangle with the credit system gave me a terrible headache!

OK, so Astra’s now a croupier in line for management training – now what?

Well, this was the most important thing as far as I was concerned. Having the nuts and bolts in place is vital, but without the atmosphere and emotion writing should generate, there’s no point. And this is where Hollywood came into play. Films like Ocean’s Eleven and The Last Casino emphasise the fun, the twists and turns, the thrill of winning and the mental energy that goes into tipping the odds, such as card-counting, which crops up in the story. (Incidentally, I have to admire anybody who gets the hang of counting cards. It requires a mathematical agility that I just don’t have – I’ll stick to my wordplay.)

Astra’s love for the job had to be convincing for her character to work. She sees glitz and glamour, risk and excitement, everywhere she turns when she’s at the casino, even when it isn’t there, or even when the lights are being turned off and she’s clearing off her blackjack table. And she’s an expert with cards, whether dealing them as croupier, or when playing the hand she’s dealt.

Astra Scott likes to live life to the full. A sorority girl and Gaming Management student, she spends her days studying and practicing guitar, and her nights partying or working at the Fountain Casino, where she has an internship as part of her final semester. The only blot on her landscape is Ash Drake, her best friend Sasha’s boyfriend. Arrogant, physical and blond, Ash has never forgiven Astra for her rejection months earlier and enjoys annoying her at every turn.

But when Astra’s boyfriend Harry reveals a shocking secret, Astra responds in the only way she can think of: by finding a way to take on a more attractive, masculine role in the relationship. Her experimentation with sex toys finds a surprising outlet in Sasha, but when Ash discovers their secret and wants to get involved, Astra finds herself torn between dislike and desire… and as their undercover relationship grows, Astra finds herself falling in love, a path she feels can only end in heartbreak.

For Ash may be the only man whose own fantasies are a match for hers, but can she knowingly steal his affections from her best friend? 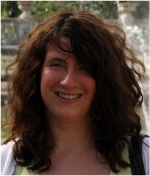 Tanith Davenport began writing at the age of sixteen as a way of utilizing her ability to drift into daydreams at any hour of the day or night. Her interests range between rock music and modern cinema to medieval literature and classical singing. She loves to travel and dreams of one day taking a driving tour of the United States, preferably in a classic 1950s pink Cadillac Eldorado.

“The Hand He Dealt” is Tanith’s debut novel and was released by Total-e-Bound Publishing on 13 June 2011.

Would you like to win an ecopy of The Hand He Dealt? One copy is being given away tour wide. To enter just leave a comment at one or all of the stops along the tour. A winner will be chosen from all the tour stops after the tour ends. The winner will be announced on the Bewitching Book Tours site.