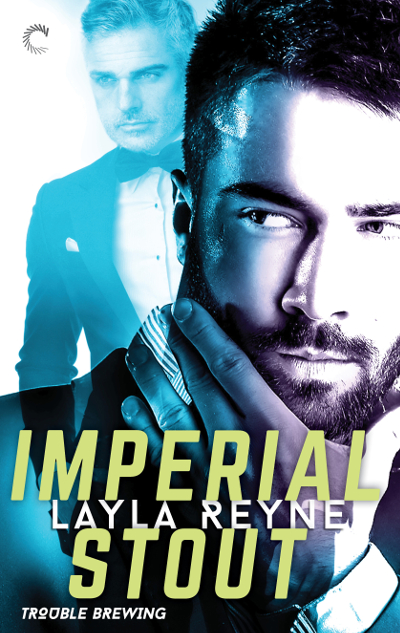 Layla Reyne spins off from her pulse-pounding Agents Irish and Whiskey books with Imperial Stout, the first installment in the Trouble Brewing series

It’s a good thing assistant US attorney Dominic Price co-owns a brewery. He could use a cold one. Nic’s star witness has just been kidnapped, his joint operation with the FBI is in jeopardy, his father’s shady past is catching up with him and the hot new special agent in San Francisco is the kind of distraction best handled with a stiff drink.

Kidnap and rescue expert Cameron Byrne has his own ideas about how to handle Nic, but his skills are currently needed elsewhere. The by-the-book FBI agent goes deep undercover as a member of an infamous heist crew in order to save Nic’s witness, break up the crew and close the case before anyone else gets hurt. Nic in particular.

Things heat up when Cam falls for Nic, and the witness falls for Cam. As the crew’s suspicions grow, Cam must decide how far he’s willing to go—and how far into his own dark past he’s willing to dive—to get everyone out alive.

Available from:
Amazon UK
Amazon US
Carina
Other retailers

“Turn around, baby,” Cam whispered. He stepped back, only far enough for Nic to rotate, then pulled him close again. “We’ve been dancing around this for months,” he said, walking them back toward the desk, Nic bumping up against it. “You want this as much as I do, if the two kisses we’ve shared are any sign. Unless I read them wrong?”

Chin down, Nic glided his hands up the outsides of Cam’s arms and over his shoulders, leaving a trail of goose bumps in their wake. “You’re not wrong.”

It was a miracle Cam had held out this long. This close to what he’d desired for months, the wild part of him desperately wanted to break free, wanted to play rough and hard with Nic. “Then what’s the problem?” he asked. “You came to my place the other night. You made that move.”

“A lot can change in forty-eight hours,” Nic said, angling his face away.

Cam didn’t let him get away with it, trapping Nic’s chin between this thumb and forefinger and righting his gaze. “The way you feel about me?”

“This is messy, Boston, for a number of reasons, the least of which is you could get killed tomorrow.”

Nic’s blue eyes swirled with a stormy mix of lust and hesitation, the former on the cusp of winning out. Cam just needed to push a little harder.

Author Layla Reyne was raised in North Carolina and now calls San Francisco home. She enjoys weaving her bi-coastal experiences into her stories, along with adrenaline-fueled suspense and heart pounding romance. When she’s not writing stories to excite her readers, she downloads too many books, watches too much television, and cooks too much food with her scientist husband, much to the delight of their smushed-face, leftover-loving dogs. Layla is a member of Romance Writers of America and its Kiss of Death and Rainbow Romance Writers chapters. She was a 2016 RWA® Golden Heart® Finalist in Romantic Suspense.

Winners in the USA will receive paperback copies of the prizes; winners from outside the contiguous USA, will receive Amazon gift card of equivalent value.