Hi! I’m J.A. Rock, and right now I’m touring the internet talking about my latest release Manties in a Twist—Book 3 in The Subs Club series. Thanks so much to the blogs that are hosting me on this tour, and be sure to leave comments on the tour posts for a chance to win your choice of two backlist ebooks and a $10 Amazon gift card! 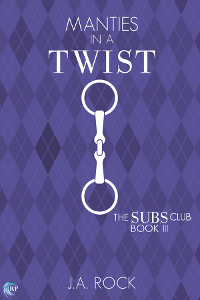 About Manties in a Twist

Look, I’ll never stop missing Hal, but this Subs Club my friends started to review suck-ass doms isn’t gonna bring him back or give him justice. For me, it’s just another chance to hang out with my friends, even if they think I’m too dumb to understand the important work we’re supposedly doing.

But maybe I’m not as dumb as they think—at least I know when I’ve got a good thing going. Which is why I just moved in with my dom. Ryan’s awesome possum. He’s really short, never makes me feel stupid, and is up for anything. One word: costumes. Two more words: women’s underwear. We’re all about the lace, no leather.

Except when we do pony play. We first tried it as a joke, but turns out I’m ballin’ at it. Now PetPlayFest is coming up, and I wanna take down the Subs Club’s archrival, Cinnamon the ponygirl, in the horse show.

My friends think I’m spending too much time with Ryan and ignoring my obligations to the group. But since when is friendship an obligation? Ryan’s my first serious relationship, and I want to take it . . . seriously. At some point I need to think about my future, not my past.

J.A. Rock is the author of queer romance and suspense novels, including By His Rules, Take The Long Way Home, and, with Lisa Henry, The Good Boy and When All The World Sleeps. She holds an MFA in creative writing from the University of Alabama and a BA in theater from Case Western Reserve University. J.A. also writes queer fiction and essays under the name Jill Smith. Raised in Ohio and West Virginia, she now lives in Chicago with her dog, Professor Anne Studebaker.

To celebrate, J.A. is giving away your choice of two ebooks from her backlist and a $10 Amazon gift card. Leave a comment to enter the contest. Entries close at midnight, Eastern time, on April 9, 2016. Contest is NOT restricted to U.S. entries. Thanks for following the tour, and don’t forget to leave your contact info!