You are here: Home / Guest Blogs / What If I Didn’t Write? by Natalie Dae

Sometimes, I sit and wonder what my life would be like if I didn’t write. Of course, there was a time when I didn’t, so I kind of know. Between leaving school (where I did most of my writing) and having four children, going to work part time, I didn’t have the energy or enthusiasm to pick it back up again. I still kept a daily diary, though, but then one day, when my fourth child was two weeks old, something nudged me to write again. I think it was after a book I’d read had inspired me and it reignited the spark. My sister gave me a typewriter—I’m sure it was her, and thank God she did!—and I managed to scrabble enough money together to buy some paper. Times were hard back then, so buying that paper meant I gave up a couple of my meals.

Despite having four little ones so close together in age and the last baby being so small, I sat at that typewriter and wrote my first novel in just under two weeks. It flowed out of me, almost like those years of not being able to write, where the words had stored themselves in my mind, had now been given the green light to be set free. That was it. I wrote two more novels, but sadly, after rejections, I decided I agreed with the publishers—I wasn’t good enough. Back in those days it was submissions direct to publishers through snail mail and it cost me nine pounds per manuscript at a time when nine pounds seemed more like fifty. Looking back, I wasn’t good enough. I still have those manuscripts now and they’re shocking. I even retyped one of them into my computer once I owned one, fixed all the mess—and it’s still shocking.

So, back to the past. The age of the computer came along and, after divorcing then remarrying, my new husband encouraged me to start writing again. I joined a critique group called East of the Web and made an amazing amount of friends. This led to finding out where to submit books online, and although some people were less than happy to share where I could send my short stories—there seemed a kind of closed door policy with a few of them where you were expected to make your own way, find out for yourself—many others were supportive. Once I started getting acceptances in horror magazines and I brushed up my punctuation, grammar, and all those other wonderful things involved in writing, my confidence grew just a bit.

Although I’ve been writing without any long breaks for twelve years now, the confidence still isn’t where it should perhaps be. But I’ve grown as a writer and have discovered that it isn’t the sales, the need for recognition, or becoming a best seller that matters to me. It’s the writing itself. The process.

Sometimes, all it takes is a kind word from someone who recognises your passion/talent and tells you to go for it. I have many people to be thankful for, many people who have held my hand along the way, and without them, I really think I would have just written for myself and put the stories in files.

So, what would I be doing if I didn’t write? I’d be reading, just like I always used to, and probably wishing that I’d taken that chance to write when I had it. 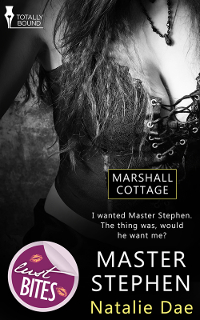 I wanted Master Stephen. The thing was, would he want me?

I’d been visiting Marshall Cottage for a while, watching a certain Dom who never seemed to have a sub of his own. He borrowed other people’s, giving them a slap here, a nipple tweak there, seemingly confident and comfortable with himself. But I was shocked to find he wasn’t any of those things—until he took control as a Master.

I wanted him as mine. Would he agree to dominate me? Give me the pain I desired? I aimed to make that happen and couldn’t wait to see how things played out. I’d observed him for long enough. It was time to step up and take what I wanted—and every beautiful bite of pain he was willing to dish out.

Would he also give me the love I craved? A permanent relationship where we shared everything? A girl could hope, couldn’t she?

Like the sound of Master Stephen? Buy it here.

She lives with her husband and children in an English village and spends her spare time reading—always reading!—and her phone, complete with Kindle app, is never far away. “I can’t imagine not reading or writing,” she says. “It’s a part of who I am. Without it I’d be more than a bit lost.”