You are here: Home / Interviews / An Interview with Emily L. Byrne 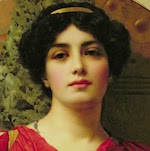 Here’s an author interview with Emily L. Byrne. Take it away, Emily…

I do find it hard to choose amongst the children, as it were, but some of my favorite short stories are collected in my books Knife’s Edge and Desire. I think that “An Incident in Whitechapel,” “El Tigre,” “The Old Spies’ Club,” “Viva Las Vegas” and “The Goddess Within” are some of my strongest stories, full of interesting setups, interesting characters and, of course, hot sex.

Sacchi Green, Lisabet Sarai, Cheyenne Blue, Xan West, Cecilia Tan, M. Christian and Marilyn Jaye Lewis, just to name a few. They’re all great storytellers and I love that about their work. Their stories really stick with you and entertain as well as arouse.

So many things! I like to write erotica about places I’ve visited (though not necessarily places where I’ve had sex). I also like to push myself to explore different themes or plots I haven’t written about before. For example, I’m currently working on a story set in a LGBTQ bookstore now because it’s something new and something familiar for me, as a former bookstore owner. I sometimes like to experiment with tense and voice when I write as a way to push myself and grow as a writer. Most of the my stories start with a setting, then go from there.

Hmmm…not unless you count being compelled to write on the couch so both of the cats can sit on me?

I’ve learned to adapt but greatly prefer quiet, solitude and good music. My cats have trained me to write on a laptop while sitting on the couch so that has become the new normal for me.

This is a really tough question for me! I think because I have written so much short fiction and because I don’t reuse characters much, they’re almost all my favorites while I’m writing them (at least by the second or third draft). When I’m writing, I get lost in the story and when I’m done, I move on to the next project, so there’s always a new “favorite” or two. That said, I’m fond of the protagonists from the stories, I mentioned in my previous response as well as those from a few stories I’ve written in first person. First person makes the story voice and events so immediate that they tend to stay with me.

Well, at first I wanted to be a jockey, then a racehorse trainer, then a veterinarian. So now, of course, I work in IT and write stories and books and recently started my own small press. I’d say I’m much better suited to the latter occupations!

Deadlines! But when I’m not working toward a specific deadline, I try to write some fiction a couple of times a week. I have to work around my day job and other commitments so finding time, energy and focus can be a challenge. Since I’ve been writing for publication for over 20 years now, it’s more of a question of whether or not I have energy and focus than mood. Music helps, as does setting a specific goal (1000 words in the next half hour or a new scene in an hour, for example). I do have a kitchen timer and I use that when I really need to get something done in short bursts.

You can always fix it on the rewrite(s). Like most writers, my first draft are about getting the story out of my head and out on the screen or page. The second, third and fourth drafts are where everything comes to life so I would say this is one of the more useful things I’ve ever heard about the writing process.

So far, I’ve never really experienced writer’s block, though I will say that 2017 has proven a bit of a challenge.

I really like erotica with science fiction or fantasy elements and settings. I think that adding magical or technological elements can add a whole new dimension to erotica and can result in some intriguing and unusual storylines. This is an area where I think writers like Cecilia Tan and M. Christian really excel; I’m always intrigued by their stories.

In 2006, I wrote 10 new short stories for Crave (my second collection), a novella for an anthology and a bimonthly erotica column for Erotica Reads & Writers Association, while working my day job. I also have issues with the tendons in my arms so the cycle was: write a scene on one project, write a scene on another project, sticks hands and arms in ice and rest. Repeat. I did get all of those things done and Crave did win a couple of awards. On the other hand, I don’t remember much of 2006.

I’m proudest of having won some awards for my previous single author collections (under a different name), Crave and Night’s Kiss, including two Goldie Awards for Lesbian Erotica.