You are here: Home / Interviews / An Interview with Golden Angel 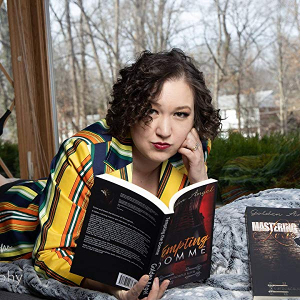 I started writing erotica way back in 2005. I was an avid reader of Literotica.com for several years before that and, because I speed read, I found that there just weren’t enough new stories in my favored categories each day. I was craving more and so I figured, why not try writing some? I’d written in the past, usually stories for school, so I thought I’d try my hand at writing something sexy. To my relief and delight, I received positive and helpful feedback from my first couple of stories and then I was just off and running.

What a hard question! I actually recently decided that Stripping the Sub, from my Stronghold Doms series, is actually my favorite. For a long time I said it was one of my historical romances, but talking about what a special place in my heart Stripping the Sub has, I realized it’s actually my favorite. It was also one of the hardest ones for me to write because it hit so very close to home with the heroine overcoming an awful incident in her past and being able to enjoy intimacy again. While Ellie had reclaimed her sexuality, she had trouble with actually becoming emotionally and romantically involved, until Master Michael pushes past her wall. I cried a couple of times while writing this book and I’ve cried many more times since then as readers contacted me with their own stories and wanted to thank me for writing the book. And on top of that, it has some of my favorite sex scenes.

So many! Off the top of my head – Lexi Blake, Kallypso Masters, Cherise Sinclair, Red Phoenix, Addison Cain, Jennifer Bene, Zoe Blake, Emily Tilton, Kitty Thomas, Maren Smith, Sorcha Black – I could seriously go on for an insane amount of time so I’ll just stop there because I can guarantee that ready any of those books will just lead you to more of my favorites!

Everywhere. I constantly have stories going in my head and they pop up from things that I’m reading, things people say to me, something I see on the television, things I overhear people talking about – I can’t make it stop. Which is not a bad thing, I’d much rather have it constantly going than not going at all, but every so often I think a break wouldn’t be a terrible thing either.

I don’t think so… it’s a rather solitary occupation though, so it’s very possible I could be doing something incredibly strange and just not realize it because I don’t have anyone to compare myself to!

Anywhere quiet. I don’t have a home office so I’m just kind of constantly moving around to wherever I can. In my head, I picture the home office that I’d like to have though, filled with book shelves and a big window with lots of light pouring in, and probably some plants too. A little corner of serenity where there’s no television to distract me!

Cynthia from Punishing His Ward. Hands down. She’s so utterly, unrepentantly herself in a time when women were often constricted and confined by society. Out of all of my characters, she is the one who most often pops up in future books that are set in the same world, insisting that she has a place there as well. I can’t deny her either, I love all the joy in life and the brazen comments she brings to the page.

Oh yes! My friends had known that I was writing for the website for ages and they were very much ‘You would’ about it. Once I moved over into writing books I did tell my mom and she was very proud. She decided to break it to my father and brother during my dad’s birthday party later that year. My dad just kind of sighed – he underreacts to everything – and my brother likes to act like he’s grossed out, but he’s told me he’s proud too. I have a pretty great family.

I wanted to be an English teacher for the longest time! At one point I did want to be an author, but I wasn’t very serious about that because I didn’t think I could possibly make it come true.

If I just wait long enough, it just kind of happens. My fingers get physically itchy if I go without writing for too long. If I need to write because of a deadline and I’m not feeling the itch, the best way to jump start it is to read – especially if I read a book in the same genre as what I’m supposed to be working on.

Same way I get in the mood – read! And if that doesn’t work, which is rare but it happens, I’ve found that going for a walk while I mull over the scene I’m working on somehow always gets my brain going.

Oooooh…. Probably one of my shifters or aliens. Because how cool would that be? I’d love to get a little supernatural going in the world.

In 2018 I tried to have something release every month. I almost made it. And I had three releases total in August (one of my own and two box sets I was a part of), so I tell myself that makes up for the two months I didn’t have a release.

Being an author at all. In the past year I’ve gotten the orange Bestseller tag from Amazon multiple times, something that I never thought I’d achieve, and now I have my first traditionally published book coming out thanks to Cleis Publishing, but the main thing that I still can’t believe is that people have been buying my books at all. It feels utterly surreal to me most days. I love it, I’m so happy about it, I am incredibly grateful for my readers, but I think for the rest of my life I’m just going to be continually surprised and delighted to be able to say that I am an author. 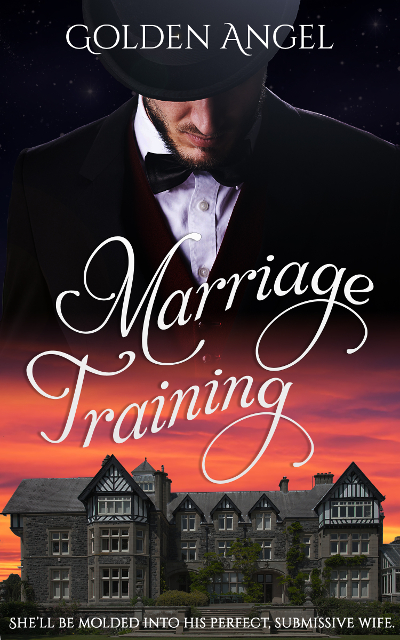 Gabriel, Earl of Cranborne, is in need of a wife—preferably a sweet, submissive, well-trained wife who could run his household during the day and obey him in the bedroom at night. When he meets Miss Vivian Stafford at a friend’s wedding, he finds himself drawn in by the exact traits he was looking for in his own wife and immediately moves to make her his own. Once the betrothal papers are signed, he arranges for her to attend Mrs. Cunningham’s Finishing School. This very special school will prepare her to be the wife of an Earl . . . and also prepare for her the very specific demands and discipline she’ll receive from her new husband at night.

GOLDEN ANGEL is a self-described bibliophile with a kinky side who loves to write stories for the characters in her head. She is happily married, old enough to know better (but still too young to care), and a big fan of happily-ever-afters, strong heroes and heroines, and sizzling chemistry.