You are here: Home / Interviews / An Interview with Olivia Bow (@OliviaBowBooks) 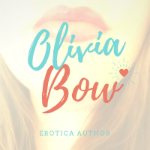 Here’s an author interview with Olivia Bow. Take it away, Olivia…

I’d been thinking about it for a year or two before I started. I’ve always had a lot of sexual energy, but I was pretty repressed about it. Last year, I started exploring a new kink with a new partner, and it completely redefined the way I approach my body and sex in general. The amount of sexual awareness and confidence I have is through the roof. Without that, I would never have found the courage to sit down and write erotica.

“I Seduced the Pastor” is my favorite story, so far. I realize the story is a bit sacrilegious, but I come from an extremely religious background, so writing it was cathartic. The main character is also just funny. I had so much fun writing her. Editing that story was much harder because I kept getting swept up in it and forgot to actually edit. I had to go back several times.

I quit smoking about a year ago, so I vape constantly while I write. I also love app games, so I’ll use game timers for writing sprints. A lot of games make you wait a certain number of minutes for a new life or an action to complete. I write while I wait, but I only get to go back to the game if I wrote a certain number of words. It’s very motivating for me. When I first sit down, I use 5 minute timers, then move up to 15, then an hour.

I love to curl up on the couch under a fuzzy blanket to write. I’ve found reserving spaces in my home for certain tasks to be productive. I have an armchair that I relax in, and I never bring work (even fun work like writing erotica) into my bedroom. When I sit on the couch, I know it’s time to focus.

Some. My sister and a few good friends. I’m not embarrassed about it, but I also understand that a lot of people in my life are closed off to erotica. I don’t want to make them uncomfortable, but most importantly, I don’t want a text from my mom every morning saying she’s praying for me. (Well, I do want that text, I just don’t want the subtext to be because you’re going to hell, my smut-writing daughter.)

I wanted to be a writer, so… mission accomplished? Honestly, my 12-year-old self would be so impressed with me now.

Write every day. I work a lot. (A LOT.) I spent a long time thinking that writing every day was impossible for me. But, recently I made my word count goal very low–only 500 words. I’ve been able to hit this even on days where I worked 14 hours at my “real” job.

I’m working through two short stories series. May Park Church confessions is set in the church culture of the small town of May Park. Each book focuses on a new couple with a forbidden attraction. The Honeypot series follows a single character, Serenity, who is a high-end escort using her skills in the world of corporate espionage. She’s using seduction to gain privileged information and influence the outcome of important business deals. Both series will be fully released by the end of May.

Can I add my own question? What is one story I want to see in erotica, but I’m not sure I’m the right writer?

I have a lot of personal issues with religion. Obviously. However, it may come as a shock that I am religious and my faith is important to me. I have spent much of my life studying the Bible, and studying the history and context of the Bible. I’ve always been fascinated by the story of Daniel and Benjamin. Daniel was anointed by God to be king, but Benjamin was next in line and by birth should have been king. Instead of becoming rivals, they became best friends, and many historians believe they were also lovers. I don’t write M/M romance, but I want their story. And I want it long. Somebody write this please!