Here’s an author interview with Lilah Suzanne. Take it away, Lilah…

When I decided to really make a determined go at being a professional writer, I knew I would need to be open to writing whatever came my way. This is something that sort of came my way—that was initially for fun and practice, but became the path I found myself on. And I’m grateful that I was open to it, because I feel so lucky to spend my time writing about people in love.

Well I’m immensely proud of Pivot and Slip of course! But I think my next book, Spice, may end up edging it out once it’s ready to go.

I have to give a shout out to my fellow Interlude Press authors. I’m in the company of some incredible talent, and I’m so grateful to be among them.

I borrow a fair amount from my life or things that have happened to people I know. I like to watch and listen and then sneak bits here and there into my stories.

I need it to be pretty quiet; no music or other constant noise, it’s too distracting. Sometimes if I get stuck I’ll go fold laundry or wash dishes or cook something, I find it’s a good way to unblock my thoughts.

In my room where my desk is, though I dream of having an office all to myself!

The love interest in my next novel, Benji, has traits that I borrowed from some of the people I love most in my life, and he’s so sweet and nerdy and genuine, I just adore him. Felix from Pivot and Slip is pretty near to my heart, someone who has been through so much but still seeks love and kindness and hope.

Most of them, yes. Everyone has been pretty great about it! Surprised at first, but I have a lot of people rooting for me, even if they don’t totally get it.

I wanted to be a writer pretty consistently, but also a veterinarian and a teacher and for a little while, a bike mechanic.

I have pretty specific windows of time where I can sit down and focus just on writing, so I don’t know that there’s a mood, so much as I know I have to sit down and do it! It’s either put my butt in the chair and do it then or not at all.

Like I said, I’ll do menial chores and that usually helps, bit sometimes a story just needs to rest a bit and I’ve had to learn to let that happen. It often unfolds the way it should after a few hours or a few days of percolating. But sometimes a block is a sign that I need to change something or take the story in a different direction and that’s okay too.

Jack from Pivot and Slip. I think we’d get along pretty well, and I wouldn’t mind taking some yoga classes from him.

Probably JK Rowling. I bet she’d have a lot of great advice and I could try to get super secret “Harry Potter” info out of her once we’re best buds.

LGBTQ romance, because I’m so happy to see more diversity in the love stories that are being told now and maybe more people will see that these stories matter too and that everyone should get a chance at a happy ending.

I’ve just started the editing process for my second novel, Spice, a romantic comedy about a sex advice columnist whose own love life is in need of a little help and who really wants to find his own happy ending.

Trying to write a historical romance story. It’s a success in that I finished it, but I would probably do a lot things differently if I ever do it again. But I learned a lot!

Pivot and Slip for sure, because it is a lifelong dream realised.

Jack got down on all fours, shifted back with his arms out in front of him and popped his hips up high, stretching his legs out straight. So maybe it was a little difficult to hold his head up high when it was hanging upside down between his arms, and he could possibly have picked a better position than one that had him sticking his—

Felix made a choked-off noise next to him and Jack angled his head slightly to see what was wrong, worried that Felix had hurt his back by not doing the pose correctly. But he was still hunched on the mat watching Jack demonstrate the position, hands clenched, eyes wide and fixed unmistakably on Jack’s ass where it pushed up into the air and—oh.

Jack wanted to preen a little, but that was unprofessional, of course. Not to mention a little tacky and vain. But if he swayed his hips just a bit more than was necessary while walking up to the front to dismiss everyone, well, he was just energized after a good session, was all.

He stood by the door, a constant stream of Goodbye and See you Tuesday and Murray stepping in close to say out of the corner of his mouth, “I may be losing my hearing but I sure ain’t blind,” with another wink as he passed by. And while Jack gaped after him, trying to figure out exactly what that was supposed to mean, Felix stopped in the doorway, nervously rubbing the back of his neck.

“Sorry I’m so hopeless,” he sighed.

“You are not hopeless, Felix.” Jack’s fingertips settled on Felix’s forearm before he caught himself and pulled back. Felix was obviously not what Jack had assumed, but still. There were lines. He was a student. “You just need to relax.”

“Yeah, I… struggle with that. A bit.” Felix scrunched his nose up and Jack just barely resisted the urge to bop it with his index finger.

“Well, I’m sure I can find a way to loosen you up,” Jack replied, then cringed at Felix’s startled expression. Way to not the cross the line there. “I—I mean. You’re so tense and I can help you out. Not help you out. Relieve the tension. Not like that! Oh, God. I’m shutting up now.” 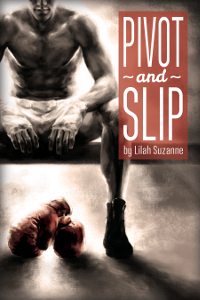 Former Olympic hopeful Jack Douglas traded competitive swimming for professional yoga and never looked back. When handsome pro boxer Felix Montero mistakenly registers for his Yoga for Seniors class, Jack takes an active interest both in Felix’s struggles to manage stress and in his heart, and discovers along the way that he may have healing of his own to do.

Faced with the ghosts of his athletic aspirations, can Jack return to his old dream or carve out a new path, and will their budding romance survive the test of Felix’s next bout in the ring?

Lilah Suzanne has been writing actively since the sixth grade, when a literary magazine published her essay about an uncle who lost his life to AIDS. A freelance writer, she has also authored a children’s book and has a devoted following in the fan fiction community.

Lilah Suzanne on the web: