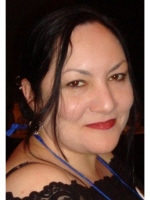 Find out what she had to say…

Around 1995 I started writing fantasy and historical romance. I already incorporated erotic elements in that work and I’d had fantasy shorts published in the small press. Then I saw a TV programme about women’s sexuality and it featured the Black Lace editor, Kerri Sharp. She was amazing, and she inspired me. I began reading Black Lace books and wondered if I could try erotica as well as the other genres I was working on. I sat down and wrote a short story called “In Pursuit of Knowledge” and sent it to Kerri. It was a real shot in the dark because Black Lace didn’t publish short stories at that time, but Kerri was just starting to put together an anthology (a very lucky break for me!) and she liked what I’d sent. She commissioned my story!

At the present time I think that would be SORCERESS, because it was a big fantasy story that I’d lived with in my imagination for a long time. The exotic, historical setting demanded a lot of me and I really enjoyed working to that challenge. THE HARLOT will be out in June, and that will be my overall favourite. It’s my best work to date and the story absolutely engrossed me — the setting, the characters, the eroticism, and the magic.  I’ll be writing two linked books set in the same world, THE LIBERTINE, and THE JEZEBEL, later this year and I can’t wait!

Ooh, so many great authors to choose from. Portia Da Costa, Marilyn Jaye Lewis, Emma Holly, and Alison Tyler — to name just a few long time superstars in my eyes. Each one is different and fascinating. I can only admire their power with words and the eroticism they can conjure on a page. A new-to-me author who has also dazzled me is Giselle Renarde. Her talent is amazing, her stories totally engrossing. She’s going to be a big star and I’m currently lapping up everything she does.

Everywhere and anywhere! Sometimes it’s impossible to pinpoint exactly where a story idea came from, because they just sneak out of the mysterious shadows and into my mind. Other times it might be music or a song lyric, or something I’ve seen or experienced that sets a story idea in motion. Places always inspire me. I’ll go somewhere and I just have to write a story set there and it begins to snowball in my mind.

The strongest example of this is the influence Lowlands Scotland has had on me — the landscape, atmosphere, and the folklore and history surrounding witchcraft. Those things inspired my novels RAMPANT, and THE HARLOT, and various related projects.

I have a tiny office in the box room that really is my sanctuary.

Everything is within easy reach and my computer is set up with voice recognition software. Sometimes I take my notepad and head up on the Moors (we live in Yorkshire) and make notes there. I often get ideas for stories when on the move and whip out a notepad, but mostly I work at home.

That would have to be Jessie Taskill, from THE HARLOT. Jessie has a secret, and that is witchcraft. Her story is set in the time of the Scottish witch trials, and if she were to be discovered she would be put to death. She survives by her wits and earns her living on her back. She’s the most stroppy, conniving and brazen heroine I’ve ever written about and it was so much fun! She liberated me. I had so much fun with her.

I was already a published author (in short stories) when I met my partner, Mark. I did worry what he’d think, because it’s such an important part of my life and my goal was to write more. I stressed about telling him. Luckily he was totally chilled about it, intrigued and curious. He’s proud of me and supports what I do, and I’m very lucky.

Not everyone has been like that and it means so much if your closest understand what you do and support you.

From about the age of twelve (when I read my first Barbara Cartland, and Mills and Boon novels,) it was to write adventurous romance novels, so I’ve pretty much fulfilled that ambition (despite the many obstacles and personal challenges along the way!) Before that the usual range of career aspirations came into play – air hostess, ballerina, catwalk model. Anything that involved glamour and dressing up.

Write with your head in the clouds and your feet firmly on the ground.

It’s a fun tip but there’s a serious note there too. We have to let our imagination leap, to pursue big ideas that sometimes seem out of our reach, but we also have to treat this as a job and a business.

That means learning basic business skills, as well as stuff like staying in touch with the industry, being professional and presenting yourself well to editors, publishers, and readers.

Sometimes it is nature’s way of telling me to take a break and allow time to refill the creative well. If that’s the case I get out of the house, or read and watch movies. Sometimes I know it’s just me and I’m having a personal rough patch that is seeping in to my work, or whatever. If the latter is the case I can sometimes get around it by switching to another project (I usually have a couple on the go at a time so I can do this, maybe a short story open as well as the current novel,) or I tackle the problem another way by writing a different scene. If I’m feeling as if I don’t know the character well enough to know how they will react and move the story on (which is often the case with a block,) I’ll take time out to get to know them — construct an imaginary interview questionnaire with them to learn what’s important to them, or imagine hosting them in my home and what they’d be like to talk to or how the might react looking at my stuff (this can result in much hilarity!)

Once again it would have to be Jessie Taskill from THE HARLOT, although I imagine she’d be quite a handful (I’m laughing!) Putting her into modern times would result in all sorts of trouble, I’m sure.

She’s just so brazen and outrageous that she’d be lot of fun to hang out with, if a bit of a bad influence. 😉 Hero wise, I’d love to be around Amshazar, the hero in SORCERESS. He’s my most mysterious man.

At times his magical presence and his leadership means he’s almost priest-like, and at others he’s a spy and a devastating seducer. That combination is very alluring.

I get very shy and dazzled when I meet my “stars” so that’s a bit of a duel edged situation. For example, I met Alison Tyler in 2008 and was pretty much speechless. I’m laughing at it now. Alison is such a star, a vivacious and vibrant lady, and I was completely in awe. I’m also lucky to have met Portia Da Costa, who dazzles me with her warmth, humour, and her down to earth ways. We’ve met many times now and I think she’s getting used to me going all ditzy in her presence when I stop to think about who she is and what she’s done. I’d love to meet paranormal romance author Kresley Cole because I adore her work and think she’s supremely talented, but once again I’m sure I’d just stand there gawping and look like a fool.

I’m working on a short novel called FAYE’S SPIRIT. This one is the third in my Erogenous Zones series for Total-E-Bound. The series features three psychic sisters, and Faye is turning out to be a lot of fun to write. She’s an arty type and very cheeky. Her psychic gift is her ability to communicate with ghosts, and she’s working for two architects whose work space is haunted. As she tries to unravel the ghost’s story, she keeps being distracted by the two architects. Her sisters have both had ménage à trois affairs, and she feels left out.

Will this be her chance to get naughty with two men, and if so what will the repercussions be?

My first reaction is to say completing a novel that was over 100,000 words long. I couldn’t even begin to imagine that, when I set out. I was a short story writer for several years before I seriously approached novel writing. I’m also incredibly proud that I’ve had a short story appear in an anthology (STIRRING UP A STORM) alongside a Margaret Atwood work. She’s an amazing writer and I’m a huge fan. If you’d told me that I’d be in an anthology with her back when I was a student and first reading her work, I never would have believed it.

Ultimately the biggest challenge is to keep growing as a writer and to handle being self employed and motivated. It’s a lonely job at times and it requires dedication and self belief that can be difficult to muster and sustain. I’m still here after 15 years and I continue to grow and move forward. I’m proud of that achievement, even if it isn’t always the easiest job in the world!