One frigid winter night a week before Christmas, college student Will stumbles into a church during choir practice, bruised by his own father’s hands. He’s out of the closet now—there’s no going back since his fundamentalist father learned the truth—but he’s also out of a home, a family, and a future. Will has nowhere to turn. No one to care.

Except . . . Will’s roommate, Quinn, cares. Maybe too much. He’s been attracted to Will since they moved in together, but never dreamed his crush was gay. With Will’s life in pieces, Quinn doesn’t want to push. He also knows he has more experience than Will, who’s never even been kissed.

Then Will’s father makes a reappearance, and Will has to learn to trust his heart more than the voices of his past. But it’s the season of miracles, faith, and hope, and Quinn is determined to teach Will how to love and be loved. 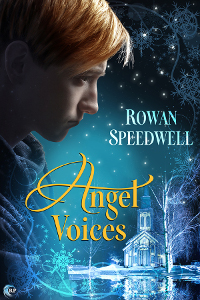 In her copious spare time (hah) she does needlework, calligraphy and illumination, and makes jewelry.  She has a master’s degree in history from the University of Chicago, is a member of the Society for Creative Anachronism, and lives in a Chicago suburb with the obligatory Writer’s Cat and way too many books.

To celebrate the release of Angel Voices, one lucky winner will receive $15 in Riptide Publishing credit! Leave a comment with a thoughtful question and your contact info to enter the contest. Entries close at midnight, Eastern time, on December 3, 2016. Contest is NOT restricted to U.S. entries. Thanks for following the tour, and don’t forget to leave your contact info!