When Arbor’s affable new mayor hires an architecture firm run by a dangerously stunning mother-daughter duo with their own unique magic and an old score to settle to oversee the downtown’s reconstruction, chaos descends upon the vulnerable community, and the Witches of Arbor are once again called upon to protect those who spurn them. Yet jealousy, vengeance, and an unforeseen foe with a ravenous hunger for power brings Eva to her knees. With the aid of her familiar, coven, a few unexpected allies, and the magic within her, Eva must reconcile her heart and summon the power to rise again. 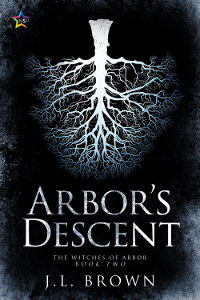 Most women would have felt like a queen. All the trappings were there–the castle on a hill, the regal gown, the morbid curiosity of the general populace. Not to mention the dashing gentleman of the castle wrapped around one arm, and my ethereal companion curled around the other. But I wasn’t “most women,” and I was no queen. I was a witch, a witch who had triumphed despite my Arbor neighbors’ best efforts to kill me.

They said we were evil. They tried to burn me. They killed my friends. But I survived. And though I grieved for those who did not, I refused to defile their memories by enacting revenge, however tempting.

Because I’m not evil, despite the prevailing notion in Arbor. A little wicked, possibly. Naughty, most definitely. But not evil.

Instead of seeking vengeance, my coven and I chose a more diplomatic path and invited the residents of Arbor to the Samhain grand opening of the Manor Arts, our new gallery within Morgan Manor. This magnificent walled estate sat high atop Red Hill and overlooked the once bucolic village. I’d taken up residence due to my late nights in the gallery and the manor’s inordinate number of empty bedrooms. And of course, proximity to the master of the house. The estate belonged to Alexander Morgan, the man—the witch—whose fury and anguish had leveled half of downtown. Not that his involvement in the fire was common knowledge. The newspapers attributed the burning of Arbor to a severe summer lightning storm. They weren’t wrong.

Ignorant of Alexander’s guilt, and relentlessly nosy, the people of Arbor accepted our invitation. My small-town neighbors arrived in jewels and formalwear, costumes and masks, on the most magical of nights when the veil between worlds thinned and the spirits of the dead laced the breeze. The very people who tried to stop me from opening a gallery in their town, joined the avant-garde and the elite of the arts community to celebrate the Manor Arts grand opening. They gathered for an event hosted by a witch they’d strapped to an elder tree pyre and set aflame only four months before. The witch who lived through it. The witch who saved them from Alexander’s magical retribution.

Our newly enshrined coven, the Witches of Arbor, orchestrated every nuance of the evening to evoke wonder and trepidation. We had the perfect backdrop. The manor’s rough, gray stone battlements and turrets and bell tower loomed haunted and menacing. Torch-light and jack-o’-lanterns, carved with ancient Samhain symbols, cast the shadows of those assembled across the sprawling lawn.

No matter where the eye landed, it fell upon the frightening, the seductive, the wildly unique. An army of black-clad servers, each with raven hair and candy apple lips, wove through the crowd with hors d’oeuvres and champagne. Jugglers with ghoulishly painted faces launched onyx orbs and flaming swords into the air. A buxom steampunk illusionist levitated six inches from the ground, beckoning the curious and brave to witness her other-worldly feats. Tattooed and pierced contortionists twisted themselves into impossible positions. A lone violinist conjured an eerily enthralling melody; her instrument tuned in nature’s pristine pitch. Like the pied piper, she lured our awed visitors through the manor’s gaping entrance. With nervous steps, they shuffled toward the alabaster hearth blazing beyond the iron doors.

Many of our guests, particularly the artists and their ilk, appreciated our theatrical welcome. It was Halloween, after all. But the Arbor residents were terrified. Their anxious hearts beat against their chests as if they were passing through the gates of hell itself.

Their dread swelled like static on my skin, and despite my repudiations of evil, I reveled in their fear.

The entire town would have burnt if I hadn’t stepped in. Calling down the rain hadn’t been enough to extinguish Alexander’s flames. I drew water from the fucking Ausable River to put out the fire. These lemmings would have been scorched to the earth if I hadn’t summoned the water. I saved them, even after they tried to kill me. Even after they stoned Celeste and burned Adelaide. They should fall to their knees, thank me for sparing them, and beg my forgiveness!

A strong, calming hand settled on my shoulder and halted my mental rant. I gazed up into dark eyes veiled by cascading chestnut waves. Clad in an impeccably cut tuxedo, Alexander towered over my left side, a mischievous twinge of humor playing on his lips.

He leaned down close to my ear. “You’re right, streghetta mia—high priestess. The Arbor mundane should bow before you. You saved them from me, and in the process, you saved me from myself. I, too, bow before you. Evangeline Clarion, you are my queen.” He winked before bending deeply at the waist.

Celeste, my elegant companion entwined around my right arm, snorted, and rolled her eyes.

“Don’t tease me.” I pinched Alexander’s arm. Hard. “And stay out of my head, you ass. If I want you to know something, I’ll tell you myself.” I glared up at him.

“I’ll tell you this,” I continued indignantly. “I wouldn’t want to be a queen. Being a queen isn’t any better than being a witch. We both have power and can influence matters great and small. Sure, queens bask in riches, but witches have ways of obtaining wealth too, and we aren’t bound to conform to society’s stringent rules. We’re free.”

“Queens get beheaded, but witches get burned,” Alexander countered, his jaw clenched tight.

“Only the naughty ones.” A memory of the wise and brazen Adelaide Good, my late high priestess and mentor, passed through my mind. “And thanks to the Goddess, I don’t have to worry about their fire. While I may not be evil, I am the wickedest witch in town.”

Celeste clapped her hand over her mouth to check her mirth. “Like you said, Alexander, she is the high priestess.”

Ignoring Celeste, Alexander lifted himself up to his full height, pulled back his shoulders, and glowered down at me. “You’re not getting too big for those tiny britches, are you, Your Highness?” He couldn’t fully hide the smile that threatened his stern face.

“You’re hilarious, Persephone.” He teased me with his words, but there was nothing playful in the look he gave me as he brushed a stray lock of hair away from my cheek. “But are you sure you’re okay? I know crowds make you anxious. It’s understandable, especially after…” He averted his eyes.

“You mean, especially after a mob of my neighbors cheered for my death and set me and Adelaide on fire?” I snorted. “Yeh, I’m ok.”

Alexander growled low in his throat and ran his thumb along my cheek. “I won’t let anything happen to you ever again.”

“Oh, please.” I waved the notion aside. “If you don’t let anything happen, nothing will ever happen. And that is fucking boring.”

“I think I heard that in Finding Dory,” Celeste noted dryly.

“I’m just saying I can cover for you if you want to duck out. Hell, I’ll shut the whole thing down. Say the word.”

I shook my head with an indulgent smile and sighed.

“Alexander, I’m fine. Great, actually.” I raised my hand and ran it along his stubbled jaw. I locked my eyes with his. “This is the biggest night of my life. This is all I’ve ever wanted, and it’s more spectacular than anything I ever imagined. I worked my ass off for this. We all have. And I’m glad Arbor is here to see it. I want them to know they didn’t stop me. I have no intention of hiding.”

“Then I’ll be right here to make sure you’re safe.” Alexander dropped a kiss on my head, then turned his attention to the festivities and their looming dangers.

He still hadn’t learned. He didn’t have to be my great protector. I didn’t need that. I didn’t want it.

What do I want? I asked myself the question for the millionth time. I turned instinctively to the other-worldly vision curled at my right side, the evening’s Mistress of Ceremonies, Celeste Galehorn.

I’ve always been a lover of words – reading them, writing them, singing them. And I’m known as a talker – especially about politics, usually at an abnormally loud volume. I was the kid who always got into trouble for staying up too late to read, and that habit has followed me into adulthood. Edgar Allen Poe, Anne Rice, J.K. Rowling, and Jane Austen are my greatest literary influences. Family is important to me, and I cherish the large Italian Catholic family that raised me. I’ve been married over 18 years. I’m a momma of two incredible boys. I have a small home in New Jersey, and enjoy listening to my husband’s music, camping, kayaking, and getting lost in the woods. I’m a coffee and wine drinker, and I believe chocolate can cure most ills.