Hi, I’m Kris and welcome to the blog tour for As La Vista Turns, book five in my awesome queer soap opera! Enjoy the blog tour! 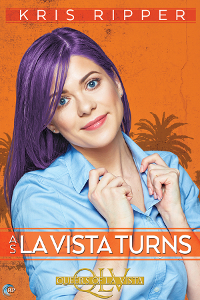 About As La Vista Turns

Zane Jaffe has almost lost track of what conception cycle she’s in. (That’s a lie: this is cycle thirteen.) She’s fake-dating her pal Mildred to get her best friend off her back, but judging by how hot it was when they accidentally kissed, her feelings might be somewhat less platonic than she’d thought.

And she’s decided that healing the fractured local queer community can only be accomplished through a party. Or maybe it’s actually a wake. Whatever it is, it’ll take place at Club Fred’s, and there will be alcohol.

Trying to conceive is an unholy rollercoaster of emotions, and Mildred won’t let them kiss again until Zane figures out how she feels. Between the wake (exhausting as hell, and that’s just the fun stuff), the constant up-down cycle of trying to get pregnant, and saving the world in the meantime, Zane has no idea. Fall in love with Mildred isn’t on her list, but maybe it’s time to let go of that rigid future she’s been working toward, and instead embrace the accidents that can lead to something better.

As La Vista Turns is available from Riptide Publishing. http://riptidepublishing.com/titles/as-la-vista-turns

Kris Ripper lives in the great state of California and hails from the San Francisco Bay Area. Kris shares a converted garage with a toddler, can do two pull-ups in a row, and can write backwards. (No, really.) Kris is genderqueer and prefers the z-based pronouns because they’re freaking sweet. Ze has been writing fiction since ze learned how to write, and boring zir stuffed animals with stories long before that.

To celebrate the release of As La Vista Turns, one lucky winner will receive an ebook of their choice from Kris’s backlist! Leave a comment with your contact info to enter the contest. Entries close at midnight, Eastern time, on March 4, 2017. Contest is NOT restricted to U.S. entries. Thanks for following the tour, and don’t forget to leave your contact info!