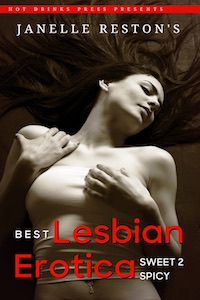 An Amish Girl Experiments with Chemistry
Rachel Yoder has long discarded her drab Amish garb for hot pink short-shorts and loud music, but she hasn’t forgotten what she learned growing up — that love is best expressed through baking. That philosophy has made her downtown bakery among the city’s most popular, so she hires Leticia to help her out. Leticia’s learning a lot about food, but she wants to taste more of Rachel’s love than melt-in-your-mouth cinnamon rolls can provide.

Water & Air
Miranda is an ordinary young woman resentful of the magic that runs in her family but has skipped her generation. If she had such powers, she certainly wouldn’t be like the witches who descend on her lake resort town every summer, wasting their powers on stupid party tricks.

But when Miranda meets a water witch named Hazel, she starts to wonder if the practitioners of magic aren’t so bad after all. And if reconciling herself to the world of witchcraft means she has a better chance of sleeping with Hazel, well, so much the better.

Making Snow
In this sexy, modern take on the Grimm fairy tale “Frau Holle” (“Mother Hulda”), a ski resort manager falls through the ice and finds herself in a new world of sensual delights.

Dance for Me
Miranda Jamison’s submissive tendencies awaken under the rigorous teaching methods of dance professor Hannah Lacey. But Miranda soon discovers not any Domme will do. Only Professor Lacey knows how to break Miranda down, then make her more whole than she was before.

In a Pinch
Grad students Jess and Kendra have always had a pretty vanilla sex life. That all changes when Kendra overhears Jess making strange sounds behind a closed door.

Alien Vibes
A couple’s obsession with The X-Files and little gray aliens goes deeper than most.

Wordless Surrender
A Deaf dominant plays with the submissive female partner of her dreams. All About Romance says this story “has an extremely strong sense of character alongside a rapturous sense of love for bondage and dominance that translates well even if you don’t kink to it.”

Janelle Reston lives in a northern lake town with her partner and their black cats. She loves watching Battlestar Galactica and queering gender. You can keep up with her at www.janellereston.com.