Cam Habersham is having a hell of a time keeping up with his fae studies in the Ancestral Lands because a certain werewolf constantly interrupts his thoughts. Everton Lilch is the wolfen beast who follows Cam around, but he pushes Cam away every time things get steamy.

The queen of the fae has had enough and tasks Cam with an impossible feat, an undertaking only Everton can help him accomplish.

Without his coven, Sparks Gemmell is a lost witch. In desperation, he casts a spell, hoping to reunite his brothers. But he doesn’t count on the wayward route magic often takes. He finds himself wrapped up in a mandate of the horned god and inserted into his Shadow Brothers’ relationship in order to protect his city from the darkest elements of the Shadow Realm.

As the darkness of the Shadow Realm descends, Cam and his werewolf, along with Sparks and his coven brothers, confront wraiths, mutant werewolves, and witch law enforcement. Chaos erupts in an effort to please queens and gods.

After all, it comes down to the ley of the land. 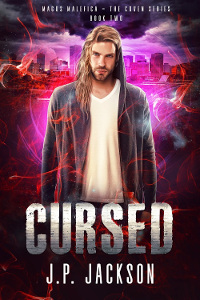 “I am not wearing this.”

Cam tossed the skimpy garment onto his sun-dappled bed while Sen, his man-in-waiting, a Kijimuna tree sprite, wrung his long-boned but tiny hands. Sen glared at Cam, but his nervous hand wringing never stopped. Cam returned the stare, hoping his stubbornness would win.

Eventually, Cam broke the connection and focused his sights on the far wall of his room. A new tendril wove its way up the wall.

Everything the fae used or constructed was in harmony with the environment. The bed had been crafted from woven tree roots. The mattress pillowed from being stuffed with a combination of dried grasses, tufts from animal pelts, and down. All the textiles were handwoven, and when the summer night air had a chill to it, more skins were brought in for comfort. Extra blankets hadn’t been necessary this summer. Despite the bed’s lumpy appearance, Cam had never slept so well. Although he still wasn’t used to the massive horns on his head or the protruding wings from his back.

The walls and the furniture were constantly changing, but when one lived inside a massive tree, one had to expect the unexpected. As the tree continued to grow, so did the interior of his assigned bedchamber.

“Your Grace, the loincloth is traditional clothing. You were scheduled to meet with the queen, and certain conventions must be upheld. You need to get down to the court room.” Sen tried his best, but Cam’s tenacity would eventually wear out the tree sprite.

“It’s nothing more than a jockstrap and I am not parading around in front of the entire Royal party in nothing but a G-string!” He pointed to the discarded underwear while scrunching his mouth to one side and crossing his arms.

“But Your Grace—” Sen licked his lips while he continued to rub his hands together.

Poor thing. Cam hadn’t made his summer an easy experience. The tree sprite had been assigned as Cam’s manservant as part of an international exchange program meant to expand the knowledge of cultural traditions and court customs from various fae clans around the world. Cam had seen and met Chaneques from southern Mexico, and Menehune from Oceania. Sen’s vibrant red hair, a characteristic of his tribe, contrasted starkly with his paper-birch complexion. Sen’s frame imitated the slender branches of a sinewy willow, so slight Cam mistakenly judged him to be frail, but he discovered otherwise. Fae could be inhumanly strong and there had been more than one occasion when Sen had managed to wrestle and hold Cam still during his magic training.

Sen’s Japanese ancestry meant his tolerance did not allow for the wild range of temperatures inherent in a Canadian prairie summer. Cam had witnessed the creature either shivering to death on the rare cool summer evening or wilting in the August heat which regularly coalesced beneath the dense forest canopy. Sen’s homelands were far more temperate and kinder on a body. Despite Sen’s constant battle with the elements, his elongated limbs and fine features meant he was nimble and quick, which made him an excellent tutor for Cam’s induction in the ways of the fae. Escaping wild and out of control fae magic spells gone awry required additional agility. The fae were supposed to be nimble, graceful, and eloquently able to slip in and out of the shadows when required, a magical talent Cam had not mastered, along with several others. Sen’s intelligence, however, proved the Eldritch clan fae outwitted and outsmarted Cam’s constant manipulations.

Cam struggled with his fae classification and history. The amount of concentration required to take in the volumes of documentation given to him bested his attention span. The antiquity of the clans spanned the course of human existence, and beyond.

Each fae belonged within one of four houses, although there were multiple species within each camp. Earth fae belonged to the clan of the Eldritch, like Sen and Cam. Air fae were the Aethers and Corvins. Their feathered wings and skin made for unusual flying creatures who lived above the clouds. Cam latched on to the name for water fae because he found out Atlanteans were real. But he couldn’t recall what fire fae were called, and at this point he simply didn’t care.

Cam had made the first few weeks frustrating for them both. He refused to study, and his wayward use of fae abilities had resulted in wanton destruction within the village, which landed him in hot water with the Ancestral Lands queen, Lady Aine.

In his defence, Cam had demonstrated his ability to become invisible, and he regularly used probability spells to favour his penchant for doing nothing in the hot August afternoons.

Cam stood beside his bed, naked, staring at the wall and contemplating how he had managed to get here. He had his best friend in the whole wide world to thank for all of this. Devid Khandelwal and his cockamamie summoning board had been the catalyst in forever altering Cam’s humanity, and subsequent captivity within the Ancestral Lands of the forest fae. Granted, his home in Edmonton wasn’t far away, but until Cam had, at a bare minimum, mastered the art of a human disguise, Lady Aine would never let him leave.

Grasping the concept and maintaining the illusion proved inordinately difficult. He had to completely change his new horned and winged form into the way he used to be. That meant being able to maintain the image he wanted to project in his mind’s eye, all while holding conversations, or carrying out mundane tasks like household chores or visiting the local market. Illusions proved to be impossible for Cam, but public appearances with massive, curved horns and a slender furry tail would expose the Shadow Realm and its inhabitants to the mundane world. Exposure was something the entire magical community, fae, witches, beasts, and spirits alike, avoided at all costs.

Cam’s membranous wings sputtered. The appendages had a life of their own, and often reflected his emotional state.

“May I point out you’re not wearing anything right now, and yet I’m here. What’s so different between your nudity right now and satisfying the queen with your presence in clothing which is customarily worn by males?”

“Sen, you’ve seen me naked every day, several times a day. You bathe me, not my choice. You dress me, not my choice. You wake me in the morning, also not my choice. And speaking of morning, where is my required cup of coffee?” Cam’s tail flicked from side to side as he glanced around his room, his wings flapping in annoyance. Camila, Cam’s alter ego and super bitch, showed up when the caffeine levels were bottoming out. The fae folk didn’t consume coffee, and Cam hadn’t had a good cup of velvety deliciousness in weeks. His irritability lately had known no bounds, but the community had made exceptions considering his most unusual initiation into the Ancestral Lands—coffee being one of them. The elders of the Ancestral Lands had commented on Cam’s oddness. His fae body held on to the addiction of caffeine when his stomach no longer tolerated anything more than meat. Protein, and lots of it, was a daily requirement.

In short, Cam moped and perpetuated his miserable mood to everyone around him. His normal routine had been turned upside down, his dating life had been non-existent, and as much as he had relied on Dev for so much of his past life, he had to cut the guy some slack. Dev was going through his own adjustments, what with becoming a witch and getting a boyfriend in the deal.

J.P. Jackson is an award-winning author of dark urban fantasy, paranormal, and even paranormal romance stories, but regardless of the genre, they always feature LGBTQ main characters.

J.P. works as an IT analyst in health care during the day, where if cornered he’d confess to casting spells to ensure clinicians actually use the electronic medical charting system he configures and implements.

At night, the writing happens, where demons, witches and shapeshifters congregate around the kitchen table and general chaos ensues. His husband of 22 years has very firmly put his foot down on any further wraith summonings and regularly lines the doorway with iron shavings and salt crystals. Imps are most definitely not house-trainable. Ghosts appear at the most inopportune times, and the Fae are known for regular visits where a glass of wine is exchanged for a good ole story or two. Although the husband doesn’t know it, Canela and Jalisco, the two Chihuahuas, are in cahoots with the spell casting.

J.P.’s other hobbies include hybridizing African Violets (thanks to grandma), extensive traveling and believe it or not, knitting.