Nate’s no supernatural expert, but even he knows a murdered man coming back to life to kill him can only mean one thing—the necromancer is back and out for revenge.

Recruited by Department Seven in a desperate attempt to stop Peter before he claims new victims, Nate quickly realizes he’s in way over his head. His powers are failing him, he’s haunted by Peter’s ghost, and he can’t even remember how he stopped Peter the first time—or why he feels that someone very important is missing from his life. 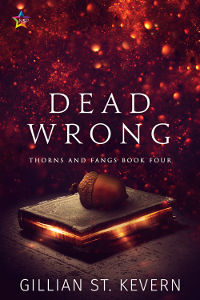 Ben is fighting for his afterlife. Trapped in the supernatural version of solitary confinement, he knows freeing himself will destroy New Camden’s fragile peace—but what choice does he have? The longer he spends in his magical prison, the harder it becomes to resist his inner vampire. But if Ben wants to help Nate prevent Peter taking over the city, he has to prove himself to his sire—Saltaire, a thousand-year-old vampire with no qualms about using his immense power to suppress Ben’s free will.

As the casualties mount and the city descends into chaos, Ben and Nate must overcome their worst fears and impossible odds—or be written out of existence entirely.

The afternoon had all the gloom of a funeral. The pavement and the drab external walls of the surrounding buildings extended to the gray sky above. Nate and Aki stood in silence in the alley beside their apartment building and contemplated the dead.

Nate, at six feet tall, had to bow his head to look down at them. “You’re sure it’s not, I don’t know, some kind of vampire cat?” He winced. The question sounded even worse out in the open.

Aki looked up at Nate, his hazel eyes flat. “You’re kidding me. Have you ever heard of a vampire cat?”

Nate made a helpless gesture toward the bodies. “Look at them.” There were two desiccated rats and, nearby, a shriveled up bird. “Animals don’t eat like this.” He turned the nearest rat over, noticing what looked like a puncture wound. He crouched to get a closer look.

“Maybe they were sick. Rats are riddled with disease, and pigeons are not any better—don’t touch them!” Aki made a disgusted noise. “Ugh. Keep your gross, infected hands away from me.”

Nate set the rat down and turned his head, giving Aki a speculative look.

Aki stepped backward. “Touch me and I promise I will dump you.”

Nate snorted, turning his attention back to the dead animals. “You can’t dump me. We’re not dating.”

“I can friend dump you—and I will.”

“I co-signed the lease. You’re stuck with me.”

“I’m pretty sure Grant can find me a legal loophole involving pestilence.” Aki stuck his hands in the pockets of his plaid trousers. He drummed one foot against the pavement, the movement making his keychain rattle. “Come on. Let’s go.”

Nate stood slowly, still looking down at the animals. “There’s got to be some kind of explanation for this. Maybe we should call Department Seven?”

“They’d laugh in your face. This isn’t even a case for animal control.” Aki heaved a theatrically loud sigh. “If you’re that desperate for excitement, ask George to take you hunting. She’d jump at the chance.”

Nate frowned at Aki. “I’m not desperate for excitement.”

Aki raised an eyebrow. “Aren’t you? This is the longest we’ve gone without any supernatural mishaps since you got mixed up with the necromancer, and for the last month, you’ve been glancing over your shoulder, listening to sounds that aren’t there, and watching the news for anything paranormal. If that’s not desperation, I don’t know what is.”

Nate shivered. How to explain to Aki that for the last month, he’d had the constant suspicion that there was something there, just on the edge of his awareness? “I’m not desperate.”

“Then why are we hanging out in a shadowy alley, acting like revenant bait?”

Nate blanched. Revenants were the most basic form of the undead, recently deceased with a taste for blood and no thought beyond acquiring it. Nate had been closer than he wanted to hungry revenants. “Bait implies I want to find one. I don’t.”

“Then can we please leave before one finds us—”

Something crunched in the shadows beyond the dumpster.

Nate’s breath froze in his throat. He didn’t dare turn his head to see what Aki was doing, concentrating all his attention on the shadows.

He heard a second crunch, as if something shifted on the stones beyond the dumpster. Nate stepped toward it.

“Don’t.” Aki grabbed his arm. “Please, Nate. This is a seriously bad idea.”

“And after that, I’ll call the funeral home.” Aki had his phone in hand. “I’m having them put ‘I told him not to do it’ on your gravestone.”

“Quiet.” Nate knew a revenant couldn’t kill him. At least he was pretty sure he was safe. His experience with the necromancer had woken Nate’s own supernatural side. Being part plant could be inconvenient at times, but it did mean that he was impervious to things that were fatal to ordinary humans. But being a card-carrying psychic wouldn’t protect Aki from becoming monster chow. Nate edged his way around the dumpster carefully. If it was a revenant, he’d have to act fast to stop it preying on Aki.

Nothing there? The newspaper was spread out as if someone had been sleeping rough—never a good idea in New Camden, the city with the largest monster population in the world—and it crackled under foot. Was the sound just the wind rustling through its pages? Nate turned to leave and caught a dull glow out of the corner of his eyes. He grinned. “Aki, come and look at this.”

“Is it more dead animals? Because I can pass.”

Nate crouched down. “Here, kitty. I’m not going to hurt you.”

“A cat?” Aki snorted, and Nate heard his footsteps on the stone behind him. “All that over nothing.”

Nate clicked his fingers. “Come on.”

The cat watched him balefully. She stretched, displaying her claws, before taking a step into the light. She flicked her tail, watching Nate out of her one good eye. Her left eye was milky white, with the lines of an old scar above and below. She was skinny, her fur bare in patches, and her tail was crooked. Part of one ear was missing, looking like a tattered flag on a pirate ship, with her prominent ribs the hull.

“She can’t help that. Poor thing. Who knows how long she’s been living out here?”

Aki smacked Nate’s hand away from the cat. “Stop risking animal diseases! Look at it. Probably crawling with fleas!”

Aki scoffed. “I was wrong. That’s definitely some variety of hell beast.”

Nate clicked his fingers, succeeding in drawing the cat closer to him. “You’re so mean. Just because she’s been on the losing end of a few fights…”

“More than a few. It’s probably got every disease in the book.”

Nate extended his hand, and the cat cautiously sniffed it. “I think she likes me.”

Aki leaned against the dumpster to watch. “Haven’t you learned anything from the disaster that was you adopting the last stray?”

Nate looked up. “The last stray turned out to be Grant, who we saved from his evil stepdad, getting you a boyfriend in the process.”

“We’re not dating,” Aki said immediately. “If you’re so stuck on Grant, ask him out yourself. I don’t want him.”

Nate smiled to himself, stretching out his hand to the cat’s tattered ears. She hissed, and before Nate could react, sunk her teeth into his hand. He jerked his hand back. “Ow!”

Nate sat back on his heels, nursing his hand. “Are you grinning?”

“It’s called schadenfreude.” Aki nudged Nate with the toe of his sneaker. “And you deserved it.”

Nate looked back down, but at his exclamation, the cat had darted back into the shadows. She squeezed into the narrow gap between the dumpsters. All he could see of her was the gleam of her dead eye. “You’re a bad best friend.”

Aki just shrugged. “You should have checked the fine print. It’s too late now. You’re stuck with me.”

Nate stood, dusting off his hands on his jeans. “Maybe Grant will find me a legal loophole.”

Nate draped his arm over Aki’s shoulders. “Since when is BFF legally binding?”

“Well it is. So it’s a good thing I plan on keeping you around.” He leaned comfortably against Nate’s side. “That’s your cue to say there’s no one you would rather be stuck with.”

Nate paused, guiltily conscious something wasn’t right. There was something—someone—missing.

Aki was watching him with an expression of concern on his face. “I was only joking.”

Nate grinned. He leaned over, tapping Aki on his shoulder. “Got you.”

“You!” Aki demonstrated his feelings of friendship by trying to kick him. 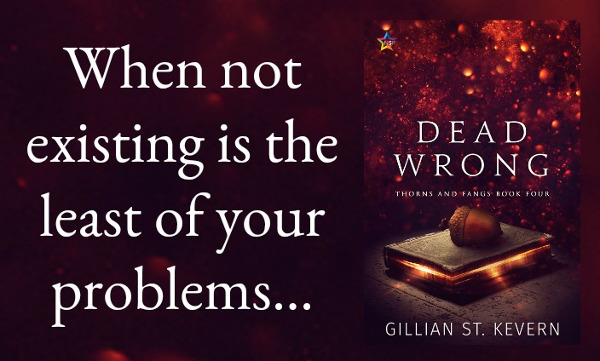 Gillian St. Kevern is the author of the Deep Magic series, the Thorns and Fangs series, the For the Love of Christmas series, and standalone novels, The Biggest Scoop and The Wing Commander’s Curse. Gillian currently lives in her native New Zealand, but spent eleven years in Japan and has visited over twenty different countries. Her writing is a celebration of the weird and wonderful people she encounters on her journeys. She is the co-founder of the New Zealand Rainbow Romance Writers, and a member of RWNZ.

As a chronic traveller, Gillian is more interested in journeys than endings, with characters that grow and change to achieve their happy ending. She’s not afraid to let her characters make mistakes or take the story in an unexpected direction. Her stories cross genres, time-periods and continents, taking readers along for an unforgettable ride. Both Deep Magic and The Biggest Scoop were nominated for Best LOR story in the 2015 M/M Romance Groups Member’s Choice awards. Deep Magic also received nominations in Best Cover, Best Main Character and Best Paranormal, while The Biggest Scoop was nominated for Best Coming of Age. Thorns and Fangs came third in the 2016 Rainbow Awards Bisexual Paranormal/Historical category.