Thank you for joining me to celebrate the release of my newest m/m contemporary romance, Christmas Lane, and thank you to Erotica For All for having me! Today I’m sharing an exclusive excerpt. Check it out below!

Zach gulped. Squared his shoulders. Ignored the dancing butterflies and eventually found his voice. “I want you to shower with me.”

As a euphemism for sex, shower wasn’t so bad.

Okay, it was awful, but nevertheless, it took Holland no time at all to figure it out.

His eyes darkened, swirling with a mixture of uncertainty and desire. Zach understood the uncertainty—he had blurted out, rather forcefully, that he didn’t want to have sex. Except that he did. But only with Holland. The sexual attraction had blossomed slowly the more time they spent together. And although Zach was nervous—hell, now he shook for an entirely different reason—he knew Holland wasn’t like those other guys, the ones from college who’d barely spared him a thought, even while they were having sex. Holland would take care of him. Be gentle with him. And he wouldn’t toss Zach away the next morning like a used condom.

“Zach, I…” He looked so lost, standing there in his kitchen, arms hanging limp.

Zach played with one of the buttons on his shirt and dropped his gaze to the floor. “It’s okay if you don’t want to.”

“No.” Holland’s laugh was confused rather than humorous as he rubbed his hands over his face. “I definitely want to. But I thought you didn’t want to.”

“Turns out that I do want to. With you.” Zach shrugged when Holland stared at him. “I don’t understand it either.”

Holland strode to where Zach stood in the doorway, shifting from foot to foot, and cupped Zach’s face in his callused hands. “Are you sure?”

“I’m sure.” Zach held onto Holland’s wrists, brushing his thumbs against the inside. Holland’s eyes darkened, burning with need and want. Zach’s knees threatened to buckle.

Silently, Holland led him upstairs. While Holland gathered something out of his night table, Zach went into the bathroom and started the shower, then undressed. He was standing there in nothing but skin when Holland walked in. Holland didn’t hesitate. He strode toward Zach, steps purposeful. Grabbing the back of his T-shirt, he pulled it over his head, revealing a glorious chest lightly coated in a mix of white and dark brown hairs. Zach swallowed hard. He’d stayed over enough that they’d seen each other naked before.

But never for this express purpose.

Zach wanted Holland’s skin all over his.

He got his wish a minute later. Ensconced in the shower, hot water raining down on them, steam swirling and fogging up the glass shower walls, the mirror, the window, Zach had never felt as safe, as protected, as cherished as he did with Holland’s strong body against his, Holland’s arms cradling him close. To date, Holland’s kisses had been sweet. Nice. Sometimes sensuous. But this… This was an inferno, a bomb going off. Zach moaned into Holland’s mouth and gave as much as he took.

Done with their shower, they stepped out and dried off.

In the bedroom, Holland had placed lube and a condom on the nightstand. Their presence only made Zach more desperate for Holland.

The bed was fluffy and cool against Zach’s back, a contrast to the fire and desire blazing a path through his veins. He was electrified, coming undone. And when Holland entered him at last, and his legs were wrapped around Holland’s hips, their eyes locked, the feeling of belonging that hit him was so strong he squeezed his eyes closed and hoped Holland didn’t notice his tears.

I hope you enjoyed this sneak peek of Christmas Lane. Christmas Lane is out now and is available for purchase at Amazon, iBooks, B&N, and Kobo. 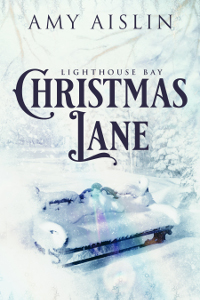 It’s recent college graduate Zach Greenfeld’s favorite time of the year and he’s just received a temporary gig planning Lighthouse Bay’s Christmas parade. Not only does it speak to his penchant for organization, it also puts him face to face on a daily basis with his unrequited crush—Holland Stone. But his new job starts off in disaster when the most important float—Santa’s sleigh—gets damaged.

Holland needs to win the Lighthouse Bay Christmas parade float competition in order to grow his new dollhouse-making business. The prize is an article in a major city newspaper, and nothing beats free advertising. Except, eager to help the adorable parade organizer, he volunteers to help fix Santa’s sleigh, leaving no time to work on his own float, and putting his prize at risk.

Damaged floats, snowstorms, and a last-minute parade emergency force Zach and Holland closer than ever. All they need is a little bit of Christmas magic to help them realize they belong together.

Amy is giving away a Christmas Lane prize pack, including a signed paperback of Christmas Lane, a personalized Christmas tree ornament, vanilla-flavored loose leaf tea, and a character art print.