You are here: Home / New Releases / Exclusive Excerpt from Give Up The Ghost by Jenn Burke (@jeralibu) #giveaway 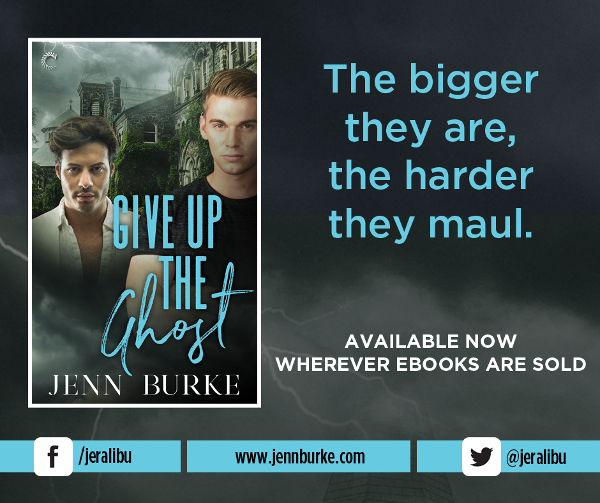 “The first report we got was last September, shortly after the renovations were done. One of our residents said that she heard her door open in the middle of the night. The light in the hall was on, so she was able to watch it swing completely open, and there was no one there.”

“Was it possible she was half-asleep and missed whoever opened it?” I asked.

“That’s what I thought at the time, so I didn’t pay too much attention. It happened again to that resident about a week later, and then another couple of residents on that floor reported the same thing.”

I shared a look with Lexi. “That’s a little creepy,” she said.

“Right? And it gets worse.”

According to Kee, the activity had only increased over the next few months. It went from doors opening on their own, to the TV and lights turning off and on randomly, to personal items being moved and put in very unlikely places, such as a toothbrush on top of the kitchen cabinets, and every pair of socks one resident owned suddenly hiding out in the freezer. One resident’s radio started blaring in the middle of the night—and it wasn’t the sort that could be programmed as an alarm, either, which made it doubly weird.

As unnerving as all of these events were, they were benign, and the residents and Kee laughed them off and lived around them. But last week a mirror shattered when a resident was looking at her reflection. Another resident reported being grabbed roughly by the arm, and watched as scratches appeared on his skin. And today, the newest kid in the house reported that as he was walking down the stairs, someone nudged him from behind—not enough to make him fall, but enough that if he hadn’t been holding on to the banister, he might have.

As Kee related all of the events, I couldn’t stop my shoulders from getting more and more tense. At first I thought it was because of the escalating incidents, and the number of them—I’d heard of echoes happening for an extended period of time, but the moving of items to weird places, and the scratching and almost-shoving pointed to this being an intelligent haunt. For a ghost who knows they’re a ghost to continue with that sort of stuff even when it becomes clear none of the living people are sensitive enough to communicate…that bothered me. A lot.

I rolled my shoulders—then froze as I felt a finger brush my cheek. “Shit.”

Lexi and Kee immediately stopped discussing details of the events at my soft curse. “What is it?” Lexi asked.

Lexi looked around the room, then shook her head. “I don’t see anything. Or feel anything. Are you—”

I nodded tersely. I could feel it standing behind me, which was so beyond weird. Normally when I was in my living form, I didn’t sense much that was otherworldly. For all intents and purposes, in this form, I was human, if longer-lived than anyone else. I might feel a gentle tug if there was something on the otherplane, or the flare of Lexi’s magic. On the otherplane itself, it would be totally different. There, my magic sustained me, suffused me, but there wasn’t usually anything to sense because the plane was empty.

But I’d never felt this—this whole-body shiver-shudder, as though I sat in the path of a blizzard-cold draft wafting from a window. There was only one window in the room—it was behind Kee’s desk, with its heavy, thick curtains drawn. No, the draft I was feeling had nothing to do with the weather outside sneaking in, and everything to do with whatever the fuck was in the room with us.

Neither option was helping my breathing.

I was vaguely aware of Lexi murmuring something to Kee, something about me being sensitive or whatever, and then she was focused on me again. “Slow and easy. C’mon,” she encouraged. “In through your nose, out through—”

A man stood in the corner. His clothes were old—I was no historian, but the shirt, pants, and suspenders looked to be from the turn of the last century, which would place him right around the time this house was built. He wore tiny round spectacles and had slicked-back hair, and he looked as solid as Lexi. As solid as Kee. As though he were in the living plane and not in the otherplane.

It shouldn’t have been possible.

When our eyes met, his widened. “You can see me?” he exclaimed and took a step forward.

I jolted up and out of my chair. One of its legs caught on the carpet and it tipped onto its back. I nearly followed it, but I recovered and stood my ground in front of the spirit.

The spirit I shouldn’t have been able to see. Not when I wasn’t in the otherplane.

I was kind of freaking myself out. 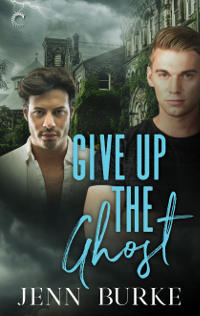 Synopsis for Give Up the Ghost:

The bigger they are, the harder they maul.

Immortal not-ghost Wes Cooper and his vampire partner, Hudson Rojas, have it all—rewarding private investigation work, great friends and, most important, a love that’s endured. But ever since Wes sent a demon screaming back to the beyond, his abilities have grown overpowering and overwhelming. He’s hiding the fact that he’s losing control the best he can, but it’s hard to keep anything a secret for long when your partner’s a former cop…and especially when your partner’s a former cop who wants to move in together.

When all hell literally breaks loose in Toronto and superstrength ghosts are unleashed on Wes and his friends, he and Hudson are thrown into a case unlike any they’ve seen before. To save the city, Wes needs to harness his new power…and find some answers. But when he gets them, the solution to fix it all could mean losing everything.

Jenn Burke has loved out-of-this-world romance since she first read about heroes and heroines kicking butt and falling in love as a preteen. Now that she’s an author, she couldn’t be happier to bring adventure, romance, and sexy times to her readers.

She’s been called a pocket-sized and puntastic Canadian on social media, and she’ll happily own that label. Jenn lives just outside of Ottawa, Ontario, with her husband and two kids, plus two dogs named after video game characters…because her geekiness knows no bounds.

Win a spooky ghost-themed prize pack, including paperback copies of Not Dead Yet and Give Up the Ghost (not available in stores!) and other goodies!