“I think ye need to be on the dangerous substances list, Sonny!  Yer spunk is fuckin’ addictive,” Declan said in a deep, lazy drawl.  Sam exhaled a laugh.

His hand moved from Declan’s hair to grip the back of his neck, “C’mere” Sam beckoned.  Declan shifted up the bed and Sam rose to meet him halfway with a smiling kiss.  His free hand cupped Declan’s stubbly face, and his tongue slipped effortlessly between Declan’s lips, soft and swollen from cock sucking.  Sam’s warm, velvety tongue filled Declan’s mouth, exploring deeply, stealing his breath.  Sam tasted the salty bitterness of his own semen mingled with Declan’s saliva.  They tasted so delicious together.  Declan’s arms snuck around Sam’s narrow waist.  He rolled, and Sam whooped as he followed, overjoyed for his slender, athletic body to be enfolded and crushed in strong, muscled arms, against Declan’s chest.

“So, what de ye want for brekkie?”

Sam’s hand slipped between their bodies and gripped Declan’s soft cock.  Declan had recently showered, and Sam’s blow job was, like the best of blow jobs, passionate and unplanned.

“You can get me back later,” Declan gave a throaty laugh and flicked his hips to push Sam’s eager hand away.

Sam pouted at the rebuttal; he was hornier than he could ever remember.  He surrendered, reluctantly letting go of Declan’s cock,

“Okay, Mr. Ramsay, food, then fucking sounds like a good way to spend the day.”

Declan took a glance at the alarm clock; it was twelve-twenty-three p.m.

“There’s no’ much of the day left.  Thank God it’s a bank holiday, or I’d be late for work.”  Very late indeed.

“Brunch then?”  Declan offered.  “How’s about one o’ mah super-duper breakfast bagels?  I can run around the corner and pick up some fresh bagels from Baker and Spice.  You hop in the shower, aye?  I’ll just be ten minutes.”  Declan instructed.

They had eaten nothing, but takeout food all weekend.  Grilling some bacon, frying a few eggs and whipping up a hollandaise sauce was the least Declan could do for his lover.

Sam held Declan’s face in his hands and met his gaze.  He observed his lover intently.  “Has anyone ever told you just how amazing you are?”  He inquired sincerely.  Declan’s hands had eased down Sam’s back and were planted on Sam’s arse cheeks, giving them gentle squeezes and caresses.

“Aye, but no one that mattered…  ’cept you!”  Declan admitted candidly.  The two men were lost in each other’s eyes for a drawn-out minute before Sam said, in a near mournful tone,

“I don’t know what I would do without you, Ramsay” he began.

“It’s… an odd feeling, needing someone so… desperately.  I’ve never felt this way about anyone before, y’know… like I’ve known you my whole life, but we hardly know one another.”

Declan chest tightened with an explosion of tenderness — mingled with a stab of fear.  The thought of ever being without Sam again…  Declan struggled to breathe for a moment, wondering how he could finally feel so in control of his life, and yet so completely lost at the same time.  Finding Sam’s whereabouts had been the obsessive focus of his free time for the past three months.  And now, Sam was back in his arms, and this love was the only thing that mattered.  The only real thing Declan had ever wanted, he now possessed… but for how long? 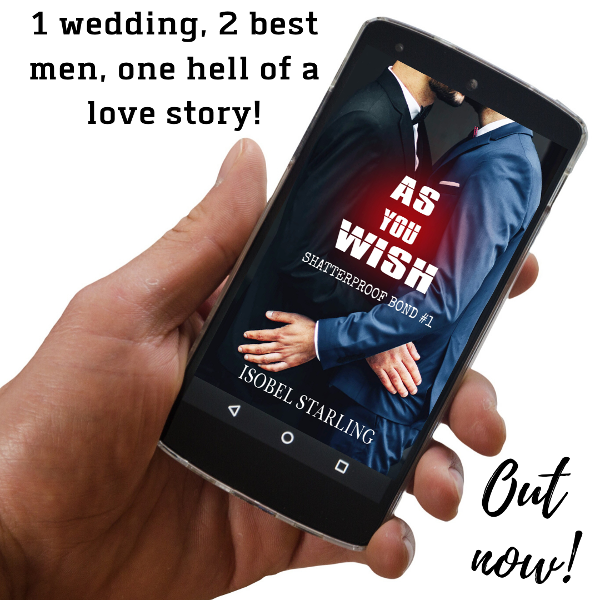 Sam and Declan’s journeys are filled with thrilling emotion, laughter, intrigue, and angst.  Together they will fight and overcome anything that is thrown at them.

WINNER OF THE 2018 AUDIOBOOK REVIEWER AWARD FOR ROMANCE

Declan Ramsay was set to be the best man at his brother’s wedding in Scotland, sharing best man duties with the bride’s gay kid brother Sam.  Sam was abroad finishing his studies so the best men communicated by email for more than a year and wouldn’t meet for the first time until a few days before the wedding.

But on meeting Sam Aiken, Declan is surprised to see he isn’t a kid at all, but a striking, athletic blond man with gorgeous green eyes and a wicked sense of humor.  Declan is alarmed by the ferocious attraction he feels for Sam. And as the attraction is reciprocated, the events at Dunloch Castle change everything Declan has ever believed about himself.

But is Sam Aiken all he appears to be?

Also available in paperback and as an award-winning audiobook, narrated by Gary Furlong.

A Scotsman and an Englishman fall in love…

After the most amazing week of his life, at Dunloch Castle on the banks of Loch Ness, in Scotland. The charming, mysterious Samuel Aiken has turned Declan Ramsay’s life upside down. Declan has experienced a remarkable change. He has come to terms with the fact he is bisexual, and he has fallen head-over-heels in love with his boss’s son Sam.

However, falling for his boss’s son was never going to be an easy path to happiness, mainly because the boss in question is multi-millionaire property tycoon and former MI5 operative, Sir James Aiken.

Sir James is repulsed by his son’s homosexuality, and so discovering that his employee Declan Ramsay- the man he installed to run his luxury property rental empire- is in a relationship with Sam, does not go down well.

Life takes a darker turn for Sam and Declan…

Pulled into a world of secrets and lies for the man he loves, Declan Ramsay’s life has changed immeasurably in the eight months since meeting and falling for his boss’s son, Sam Aiken. Declan’s journey of personal discovery is about to take a darker turn, and for Sam, the world becomes more treacherous than he could ever have imagined.

Two agents are missing — presumed dead, while on a reconnaissance mission at an outdoor adventure center in the Scottish Highlands. Sir James Aiken sends his son and Declan to follow the trail, and discover the fate of the agents.

As the mission offers his first chance to use the skills he learned on the MI6 training course in Morocco, Declan is keen to get started. However, Sir James sees to it that the seeds of doubt and discord have been sewn between the couple, as they begin their mission.

The journey to their Highland location, and the discoveries they make when they reach the G’wan Adventures center, prove that Sir James Aiken has been less than honest with his son. Events in the Highlands force Sam and Declan to face their greatest fears and understand what they both really want from life — and from each other.

True love comes at a cost…

After the devastating events in the Scottish Highlands, Sam and Declan have moved on to a new, deeper level in their romance.  Their commitment to each other is unquestionable; however, there are plenty of questions that need answering about other aspects of their lives, and those who sought to end them.

Sam is trying his best to deal with the day to day frustrations of his injuries.  He’s completely dependent on Declan for everything and hates the way the scales have tipped in their relationship.  Although he’s officially on leave, Sam’s mind cannot stop replaying all that happened to him and questioning why, and who is behind it all.

Declan’s relief at having Sam home throws him into house-husband mode. He’s happy to take the reins and care for his partner, however, beneath the surface Declan cannot help but be drawn back to how he felt in the Highlands, and how they were betrayed by a man who was supposed to have their back. Declan had promised Sir James Aiken that he would pay if he hurt Sam, and now Declan has to decide how he can deliver his payback and put his and Sam’s world back on an even keel.

One book, Two Missions, and a memory-key full of secrets!

After a series of terrorist attacks on fracking sites owned by a Gas multinational named Drilsink, Sir James Aiken’s agency is bought in to find the radical Eco-terrorist group responsible. He sends Sam and Declan to work undercover at Imperial College where Intel suggests the group is recruiting. While Sam works behind the scenes, Declan takes on the identity of Geologist Dr. Tobias Hunter and soon makes an enemy of a fellow science geek- a man who Declan comes to despise more than Sir James Aiken!

When the operation moves from London to Munich and then Vienna, Sam, and Declan are thrown headlong into a spy scenario straight out of the thriller novels they love to read—but with a distinct and disturbing sexual twist! Sam meets an old friend and uncovers shocking information about James’ past.

With Erik Madsson still imprisoned inside the A.L.L. HQ, James comes to realize that he should have listened to his son. Keeping the enemy inside his own home is about to be the biggest mistake he has ever made.

Isobel Starling spent most of her twenty-year professional career as a visual artist in Ireland.  She now writes full time and loves writing Thrillers, Comedy, Historical, and Fantasy.  In nearly six years she has written twenty books, released fourteen audiobooks, and has translations of most titles in French, German, and Italian.  The Shatterproof Bond series is a #1 bestseller in Germany.

“As You Wish” (Shatterproof Bond#1) narrated by Gary Furlong won the Audiobook Reviewer Award for Romance 2018.  It is the first M/M Romance audiobook to win a mainstream audiobook award.

To celebrate the refresh of the Shatterproof Bond Series, Isobel Starling is giving away 2 complete e-sets of the series! Open internationally, must be 18 years old to win.