Thank you for joining me to celebrate the release of my newest m/m romance, Risking the Shot, the fourth book in my Stick Side series. If you like hockey romances, be sure to check it out. Risking the Shot has an age gap romance, a single dad, and a hockey player falling for a cake decorator.

Erotica For All has allowed me to briefly take over the blog today, and I’m sharing an exclusive excerpt. Check it out below!

He kissed Tay’s temple. “Want to come in? Try my scotch?” He walked Tay backward in the direction of the front door.

“Your scotch, huh?” Tay’s gaze dropped to his lips. “How much scotch have you got?”

“Lots and lots. It could take all night.”

They were both laughing as they tumbled into the house. Before they’d gotten their coats off, Dakota gripped Tay’s hips, backed him up against the closet door, and kissed him. Tay’s laugh turned into a moan when Dakota bit his chin.

“Do you know how distracting you are,” Dakota said, peppering kisses along Tay’s jaw, “when you use a fork?”

Somehow Tay had gotten Dakota’s coat unbuttoned, and his hands slipped inside and underneath Dakota’s sweater. “Sorry?”

Dakota kissed his nose. “Not sure I believe you.”

The smile on Tay’s face was so happy, Dakota wanted to see it there for the rest of the night. “Come on.” He urged Tay out of his winter gear, then threaded their fingers together, grabbed the gift bag off the floor, and led him into the living room. From his mini bar, which was essentially a hip-high, wooden end table with a glass top, Dakota pulled out three of his favorite spirits to add to the Dalwhinnie.

“Just one, huh?” Tay said with a smirk, catching on to Dakota’s plan.

Pouring a splash of the twelve-year-old Balvenie DoubleWood, Dakota swirled the liquid in the glass, noting that its color matched Tay’s eyes and hair. He brought the tumbler up to his nose: sweet fruit and hints of sherry with honey and vanilla. Holding Tay’s gaze, he swallowed back the smooth and mellow scotch, the sherry lingering on his tongue.

The words were barely out of his mouth before Tay was on him, pushing his tongue into his mouth, hands balling the front of his sweater. Dakota released a muffled groan into his mouth.

“Mm.” Tay licked his lips, forcing Dakota to follow the motion. “Nuts and . . .” The tip of his tongue touched his top lip. “Cinnamon?”

Dakota grunted an affirmative, his dick lengthening against Tay’s thigh.

Next up was The Macallan, a twelve-year-old double cask that smelled of creamy butterscotch with underlying hints of toffee apple, candied citrus, and vanilla. Tay’s eyes were half-lidded already. He didn’t move out of the way as Dakota poured, as he sniffed the yellowy liquid, as he drank. The tumbler was barely out of the way before Tay was kissing him again, licking his way into his mouth, those demanding hands of his pressing into Dakota’s lower back.

“Honey,” Tay said, ragged. “Woodsy. But also sweet?” He licked his lips, as though he could sweep up any lingering flavor.

God damn. What had Dakota been thinking with four samples? It’d only been two and he was already drunk on Tay.

Tay must’ve been able to read minds; he chuckled and kissed the underside of Dakota’s jaw. “We still have two more. What’s next?”

Groaning, Dakota let his head fall back. “You’re killing me.”

“You started it.” Tay shifted slightly, and his own erection butted up against Dakota’s.

“Jesus.” Lust thrummed through his veins, made his hands slip on the fresh-orange and mango Talisker Skye Single Malt, and he spilled a drop of the gold liquid onto the floor.

He couldn’t be bothered to care that he’d wasted good scotch.

Tay’s next kiss was a touch more frantic. Despite his earlier words, he too wanted to get this moving. Gripping the tumbler in one hand, Dakota clutched a fistful of Tay’s firm butt in the other.

Ripping his mouth away, Tay said, “God. Forget the Dalwhinnie. Just fuck me into the mattress already.”

Dakota had never been happier to have sent Andy to Calder’s for the night. 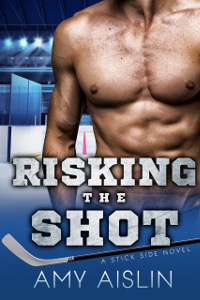 Synopsis for Risking the Shot:

A chance at making the playoffs? It’s a dream for NHL forward Taylor Cunningham that just might come true. If he can keep his eyes on the ball—ahem, puck. And study for midterms. Dakota Cotton, eleven years his senior, isn’t just a distraction, though—he’s everything Tay’s ever wanted.

Dakota has no interest in introducing someone who might not stick around to his four-year-old son. Been there, done that, with the divorce to prove it. But there’s something about Tay that hits all of the right buttons and has him wanting to take a chance.

As things heat up between them, and the pressure to succeed hits an all-time high, will they risk a shot at happiness or choke?

Amy’s lived with her head in the clouds since she first picked up a book as a child, and being fluent in two languages means she’s read a lot of books! She first picked up a pen on a rainy day in fourth grade when her class had to stay inside for recess. Tales of treasure hunts with her classmates eventually morphed into love stories between men, and she’s been writing ever since. She writes evenings and weekends—or whenever she isn’t at her full-time day job saving the planet at Canada’s largest environmental non-profit.

An unapologetic introvert, Amy reads too much and socializes too little, with no regrets. She loves connecting with readers. Join her Facebook Group, Amy Aislin’s Readers, to stay up-to-date on upcoming releases and for access to early teasers, find her on Instagram and Twitter, or sign up for her newsletter.

Win one of two signed paperback copies of Risking the Shot, plus author swag. 18 to enter and win; open internationally.