Wolf shifter Nathan Cramer is ready to finish grad school and begin his career when a trip to Center City’s Peace Conference goes awry. Weak and bleeding, Nathan knows his wounds could prove fatal. Dr. Arleth is his only hope.

Can love flourish between enemy species despite a society in turmoil? Could vampires walk in the daylight or will darkness reign? It’s a race to find answers, and Ben will have to put his trust in Nathan if they’re going to make it out alive.

Forbidden Love is a MM urban fantasy/paranormal romance and the second book in the series They Bite but can be enjoyed as a standalone. 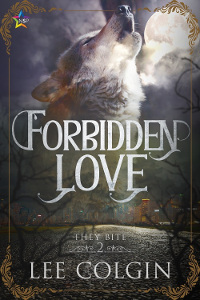 Elbow deep in test tubes and chemicals at his state-of-the-art laboratory, Doctor Benjamin Arleth startled when his alarm went off. Time for patient rounds. He hated to abandon his work when he was making so much progress, but duty called. The long sought-after drug to render a vampire resistant to sunlight would have to wait another night.

The supernatural realm’s most accomplished vampire doctor had no surgeries on his docket this evening. What he did have were several recovering patients to check on: a grouchy were-leopard who’d been impaled by a hunter’s arrow, and a friendly young Living vampire who’d undergone corrective surgery for metatarsus varus, or in layman’s terms…pigeon toes.

Benjamin went to check on the young vampire first. Knocking on the open door, Ben stepped inside the generic white hospital room. “Hello, Olivia, how are you feeling tonight?”

She grinned at him from under her nest of blankets. Olivia was small for her seventeen years, partially due to rotated tibias, but she had a big personality. Blonde curls spilled over her shoulders, and an incorrigible sense of humor sparkled behind pale golden eyes. She was fully grown, a condition that had to be met before her legs could be fixed and, more importantly, before she could be Turned. The poor girl was bored, stuck in the hospital recovering, and eager to get back to her life.

“I’m good, Doctor Arleth. I’ve been walking without any help. Can I go home today?” She looked hopeful.

The doctor tutted and shook his head, approaching her bed. “It’s too early for you to be walking unassisted.” She started to protest, but Ben continued, “You could do damage and set back your healing if you aren’t careful. Just because you can do something, doesn’t mean you should.”

“Tell me about it. I’ve been stuck here a lot longer than you.” He made a face at her, and she laughed.

“This sucks,” Olivia said with typical teenage angst. “You’re cute though, in that tall, dark, and handsome sort of way. You could get a life outside this place if you wanted.”

“How do you know I don’t have one already?”

“Call it a lucky guess.”

“Moving on.” Ben reached for her blankets. “Let me examine your legs. Then you can walk with me and show me how you’re healing.”

“Deal. Anything to get out of this room.”

Ben picked up her left leg gingerly. The flexible cast allowed him to take her knee through its full range of motion. He flexed and pointed her foot.

“How does it feel? Any sensitive spots?”

She shook her head. “Nope, I’m telling you it feels great. You must have done a really great job.”

“Good.” He put the other leg through the same exercises, watching her face for a reaction. If there was one, he didn’t catch it. Either she healed quickly or she’d mastered hiding discomfort. You’d expect the former of a Turned vampire, but a Living vampire like Olivia would take longer to heal. The girl was either lucky or deceptive; he’d find out as he watched her walk.

“All right.” Ben set her leg carefully back onto the bed. “Time to boogie. Show me what you’ve got.” He reached for her hand and helped her to her feet.

She took a step forward. So far, so good. After walking several laps of the medical center’s recovery floor, Ben believed her progress genuine. He’d miss her. Olivia was pleasant when she wasn’t busy teasing him.

The were-leopard, however, he’d love to get rid of.

The cat had been on a drunken joy run when he’d crossed into unprotected forest, human game lands. Shot through with an arrow, not only did he almost die, but the human who’d shot him had to have his memory wiped after seeing a leopard turn into an angry, naked man. He was lucky the hunter kept his shit together to call for help; otherwise he’d have died from internal bleeding. He’d been a terrible patient, complaining about everything from inadequate pain medication to the lack of decent food. What did he expect? A steakhouse?

Ben walked into the leopard’s room, eager to be done with him. “Jason, how are you tonight?”

The cat scowled as he scooted upright in the bed. “How do you think? I’m in pain. This place is stingy with the meds.”

“Pain medication is often ineffective on were-creatures. We simply have nothing else to give you.”

Ben clenched his jaw. “Still against hospital policy, I’m afraid. Let me check your wound, and I’ll see about releasing you.”

Jason pushed the covers down, and Ben got to work. The wound, though still inflamed around the edges, had closed nicely. Ben palpated the were-leopard’s abdomen, checking for signs of swelling or bleeding. Jason complained but didn’t seem overly sensitive. It should be safe to release him. Thank god.

“Good news, you’re healing well. We can send you home tonight. How about that?”

“About damn time, I’m ready to get out of here,” Jason said. “I need some real food and a good screw.” He added an obscene gesture Ben found distasteful.

“Hold off for now. I’ll send a nurse to fill you in on the physical restrictions until you’re completely cleared. Come back in a week for a final check to make sure there’s no lasting damage. Until then, be careful not to aggravate the wound.”

“Right, I get it. Careful when I’m screwing. Noted.”

Ben schooled his features to neutrality. It would be unprofessional to lecture manners to a patient, even if they deserved it.

When Jason didn’t get whatever response he’d been hoping for, he changed the subject. “Are you going to the Peace Conference this weekend? The nurse said they were bringing in extra doctors. Could get rowdy!”

Ben did not point out that the very reason the were-leopard landed in the hospital to begin with was because he’d broken the Edict of Secrecy. Allowing a human to see him shift was against the law.

Supernaturals kept themselves hidden from humanity, but was that wise in light of the technological revolution? It was a matter of time before a human filmed something on a cell phone, and they’d be exposed. If they chose to reveal themselves, the narrative could be controlled. If humanity found out by accident, it could all go terribly wrong. Many in the community had strong feelings on the subject, including this exasperating were-leopard.

“Perhaps you should come and listen to the presentations. I’m sure there’s more to it than we know.” The Edict of Secrecy had served its purpose. They must let it go. Knowledge was power and all that.

“I’d rather stab my eye out than listen to that horseshit,” Jason said.

“To each their own, but continued peace is in everyone’s best interest. We don’t want another Great War.” He glared at the cat, daring him to disagree. Vampires and were-creatures were historical enemies, but a Peace Accord maintained armistice between the species. Battle surgeons told nightmarish tales of the Great Wars.

Ben jotted down his final notes in Jason’s file and left the clipboard for his assistant, Amelia. “Take care Jason and heal well. I don’t want to see you here again.” Usually that statement was more a joke, but this time, he meant it.

“The feeling is mutual, Doctor.”

Ben hadn’t been expecting thanks, but the were-leopard’s complete lack of self-awareness annoyed him. Glad to be done, Ben made a quick trip to the nurse’s station to leave his patient updates so he could return to his research, his life’s work; a drug to allow Turned vampires to walk in the sunlight again…his holy grail.

Ben lost himself in the research.

He had dozens of theories to deliberate and countless components to try before he’d risk another test of the drug’s efficacy. Sunlight could reduce a young vampire to ash within moments, and an ancient would be dust in less than an hour, so each failed test proved lethal to some criminal soul.

The Vampire Council provided test subjects from their prisons, but Ben wouldn’t take a life lightly, no matter their crimes. As the death toll added up, guilt sat heavier in his chest. The formula had to be right before he’d ask for another trial.

Another alarm rang, jarring him from work. Only a few hours remained before dawn, and he had to leave now if he was going to meet Samuel for smokes. He’d told Samuel he’d be there. Benjamin hated to leave his research—had to tear himself away from it—but Samuel wasn’t the kind of vampire you wanted angry with you, so Ben wouldn’t stand him up. He cleaned and stored his equipment, turned off the lights, locked up the lab, and headed for their favorite haunt, the Eternal Knight Club.

See Olivia, I do have a life.