You are here: Home / New Releases / Gretel on Her Own by Elna Holst (@goindimarketing) #giveaway

Once upon a time, a brother and sister were led away into the depths of the forest. It was only to protect them, their mother explained and the brother concurred; yet he insisted on pebbles, bread crumbs. He insisted on looking back for cats and pigeons and whatnots, brightened by the touch of the sun.

Twenty years later, Gretel Kindermann is on her own: her father has taken himself off to Dortmund, her mother is a fixture at the local mental healthcare institution, and her brother Hänsel, oh—

At the heart of the matter, like a thorny-rooted weed, is Frau Heckscher, the purveyor of all things sweet in the little village at the lip of the forest. And now, perhaps, also a niece that no one has heard of before, lately arrived from Vienna to wreak havoc on poor Gretel’s nerves and heart.

In Gretel on Her Own, Elna Holst offers a contemporary sapphic twist to your favourite Germanic fairy tale of homicidal arsonists and houses built out of baked goods, trickster witches, and parenting skills that leave a lot to be desired. 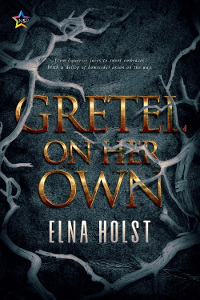 Gretel on Her Own

All her life, Gretel Kindermann had lived in the little village at the lip of the forest. In fact, as far back as anyone cared to remember—for there are always, for one reason or another, periods in the history of a place that no one can rightly recall—the Kindermanns had lived in the village. According to church records, a B. Kindermann, woodcutter, had been in residence sometime in the middle of the sixteenth century. Kindermanns were woven into the very warp and weft of village life, cropping up through the centuries, being christened, marrying, bearing children. Dying. Being born.

So, it was odd, unprecedented even, that on a raw, misty Sunday in early September, when a yellowing leaf here and there heralded the approach of autumn on the trees that lined an otherwise featureless residential street, Bernhard Kindermann was backing a rent-and-go moving van out of the driveway of no. 9, or, as it had been known to neighbours and friends for nigh on thirty years, quite simply ‘the Kindermanns’ place’.

Gretel, the grown daughter of this latest incarnation of a Kindermann paterfamilias, untied her mother’s apron and hung it over her arm, shivering in the nippy air as she walked down the drive to see her father off. Bernhard rolled down the window on the driver’s side and peered out at her, his gaze inscrutable. He picked at his gingerbread-coloured moustache.

“Do you have enough fuel to see you all the way to Dortmund?” asked Gretel, for something to say. She was in a perfect double bind, her hands clasped under the fold of the apron, pressing it to her: she wanted the moment to be over, and she wanted to prolong it indefinitely. They could not be said to have said all there was to say. Nor would they.

Bernhard glanced at the gauge to his left and shook his head. He shrugged his burly shoulders—those shoulders that had carried her through her childhood, it seemed to Gretel now as she was on the point of losing them.

“I’ll need a few breaks along the way.”

Gretel cleared her throat, dipped her head. She came up with nothing. “Well, call me when you get there.”

Her father looked as if something was on the tip of his tongue; but then he appeared to change his mind. He sat back in his seat and began to roll up the window.

In embarrassment, Gretel heard the strain in her voice, the tear-laced squeakiness of it. She hadn’t called the man in the vehicle in front of her Papi in years. And she certainly was not in the habit of telling him she loved him. It was true—of course it was—but it generally wasn’t a sentiment they put into words.

Bernhard moved his work-worn hand in a gesture somewhere between a wave and the sign of the cross.

“Goodbye, Gretelchen,” he said. Or she thought that was what he said. He had started the engine and was turning the steering wheel to go.

“So he’s off then? Good riddance to him. Off to chase that whore of his across the country, I dare say. All I’ll say is he better not come crawling back when she leaves him!” Ursula Kindermann held out her hand, impatient for another smoke. Gretel grabbed the half-empty pack from the outdoor table.

“You smoke too much,” she muttered, endeavouring to distract her mother from the topic of Bernhard. As far as she knew, there was no ‘whore’ in the picture.

“So do you!” Ursula cackled, a canny glint in her eye. Like a rebellious child, she snatched the cigarettes out of her daughter’s grip.

Gretel smiled, despite herself. It was in moments like these, fleeting episodes of astute observation, brief but witty repartees, tiny sucrose crystals of clarity, that she thought—she dreamt—she feared: We got it wrong. This woman’s mind might be salvaged. There’s nothing much the matter with her at all.

Ursula studied her through a haze of smoke. She raised her hand to wave it away and ended up teasing her peroxide curls. “It’s your brother I’m worried about,” she huffed, half ingesting her cigarette with each greedy drag. “He’s gone to the wolves.”

“What wolves?” Gretel asked, placing the pack back on the table beside her, out of her mother’s immediate reach.

Ursula stared out across the empty patch of lawn, surrounded on three sides by a chain-link fence. Beyond it were the woods, and in the distance the iron rumble of a passing train could be heard.

“I can hear them in my bed at night, yipping and yapping, howling at the harvest moon. They’re on his trail, snapping at his heels. I’m telling you, they won’t leave the poor boy alone.”

“There are no wolves around these parts, Mami.” Gretel spoke softly, joining Ursula in gazing into the fir tree forest pressing close to the fence. “They were shot off years ago. It’s a scandal in its own right.”

The French door to the veranda creaked open behind them.

“Frau Kindermann? It’s time for your medication. Oh, hello, Gretel.” The nurse gave her an aloof smile. He carried a metal tray with a jug of water, a glass, and her mother’s tailor-made cocktail of pills in a plastic cup.

Gretel glanced at her wristwatch. “I guess it’s time for me to leave.”

“I know what I hear.” Ursula didn’t acknowledge Gretel’s statement, nor the nurse’s either. Her hand brushed back her hair from her ears, the glowing embers of her fag coming close to singeing the faux-blonde strands in the process.

Richter nodded to her as he put the tray aside and gently removed the potential fire hazard out of Frau Kindermann’s fretting hands.

“I know,” Ursula repeated, poking her finger in the man’s chest. “Don’t tell me I don’t know!”