Can I change up locations? Positions? Introduce toys? Use different terminology? That last is a tough one, as I’m sure many writers have found – get too coy or too purple with your language and it’ll be highlighted in red during the editing process. There’s only so much you can do with your words, so I had to come up with other changes.

So, to make things a little more interesting, when I wrote Hyperventilating I had Cassian have a particular need to fulfil – before he goes on stage he likes to have a woman talk dirty to him.

Which made it much more intense when I finally let them have their release.

I’ve got plenty of plans for the future of the series, so I’ll have to come up with more new ways to write sex scenes. I’m definitely looking forward to the challenge. 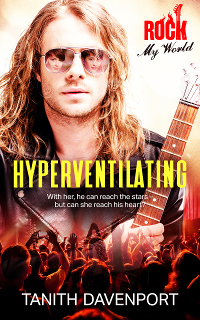 There was only silence now from the other side of the door. No light showed under the lower edge. With any luck there was nobody in the central living area—she could be alone with herself and the window.

As she opened the door she was met with darkness, momentarily blinded. She closed the door behind her and carefully felt her way across the room, focusing on the moon through the glass.

Then from behind her she heard the distinctive twang of a guitar chord.

She heard him chuckle from the other side of the room.

When she and Elyse had first joined the tour, the band had insisted on knowing everything about the skills they had learnt during their performing arts studies. Costume, make-up, acting and, in Amber’s case, voice work. She had always considered her acting serviceable at best, but voices were her speciality—and one voice in particular, a deep, throaty bedroom voice, had been Cassian’s favourite.

She dropped into the husky, sensual tone. “Sure, honey.”

“Ah, yeah. That’s the stuff.” The sound of fingers running up the neck of the guitar. “That was the thing about Triona. Never could stand her voice.”

“She was still good at your ritual, though, right?”

“Oh yeah. But, man.” His voice roughened. “It would have been way better in your voice.”

Amber Blake is fleeing a terrible betrayal in her past by touring with rock band Puppetmaster as a make-up artist with her best friend Elyse. Knowing the band is struggling, she hopes to use her make-up skills to reinvent their image, but when a member of the crew drops out, Amber finds herself asked to contribute in a different way – in the form of heated sexual conversations with hot lead singer Cassian Marsh to put him in top form before every concert.

Despite her past, Amber is unable to resist Cassian’s charm and raw energy, and enjoys knowing she can drive him wild with just her voice – but their increasingly passionate meetings leave her longing for more. Can she move past the betrayal she suffered – and can she convince a man as commitment-phobic as Cassian to break his no-dating rule and let her into his heart?

Tanith Davenport will be awarding a $20 Amazon or Barnes and Noble GC to a randomly drawn winner via rafflecopter during the tour.