Luka makes a desperate wish and the earth shifts to his will. Regretting it immediately, he tries to undue the sorcery, but it is too late. He asked for hope, and to his horror, all the hope in the world is given into his keeping. He desires nothing more than to return this gift to the world.

Aethan wants to get his hands on the Well of Hope in Luka’s keeping. If he can ransom out hope to others at his whim, the world will be at his feet. Where it belongs.

With the aid of his lover, Rhys, Luka stays one step ahead of Aethan. But Rhys has his own enemy in Aethan, his estranged father.

Rescued by Luka, his sweet, gentle witch, Rhys now stands with him against Aethan. They have vowed to return the Well of Hope to the earth despite all odds, or die trying. For what is life worth, for anyone, without hope? 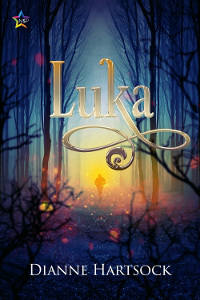 Luka settled cross-legged on the hearth with a murmured word of gratitude to the fire as its warmth surrounded him. Keeping a veiled eye on the woodpile, he crumbled a crust of bread and honey onto the stones. The animals had grown skittish of late, and he missed their company on his long tramps through the forest. The cabin had grown lonely without Rhys’s vibrant presence.

The thoughts of his lover sent his gaze to the small stack of books he kept close at hand to leaf through during the long empty nights. He’d rescued the young man from a brutish existence at the hands of a madman, and the stories were all that would ease his frantic, tortured mind. Rhys would sit close to Luka while Luka read the heroic tales until his head would nod, and he’d slump into Luka’s arms, a warm, living presence in his solitary life.

Luka raised his head, attentive. Winter gathered outside the latched door, wind howling through the trees, sending their limbs scratching along the roof. A shiver traveled up his spine. Something darker than the storm was coming.

The fire snapped in a shower of sparks, recalling his attention. He drew a small bundle of twigs from a pocket, cupped it in his worn, nut-brown hands, and breathed in the scent of juniper and sage. Chanting the words his mother had taught him long ago, he tossed the clump into the flames. A tendril of smoke rose, twirled in lazy circles in the air and brushed against his face.

He breathed deeply, holding in his lungs the heady smoke of the sage and grasses he’d gathered by the stream last autumn. His thoughts cleared. He saw everything! Snow whipped through the darkness between the trees, carried on the fierce wind. His beloved animals huddled in the scrub brush for safety and warmth. The village beyond the forest barred its doors, fires lit, safe inside while the storm raged.

His thoughts soared, bursting into the moonlit landscape above the clouds. Laughing aloud, his spirit flew in wonder, heart aching at the beauty of the night. But something tugged at his heart, his name shouted on the wind. He blinked at tears, bringing the fire back into focus, the cabin solid around him. Night pressed on the shuttered windows. Something was in the night…

Luka’s heart leaped. He comes! A soft cry of joy escaped him, and he rose in one fluid motion to his feet. He’d sent Rhys away to find love elsewhere than in the arms of a lonely witch, and yet he came, daring the storm.

“Come to me,” he urged the solitary figure in his mind’s eye, struggling up the path to reach him. A tremor seized him. Long years of bartering his herbs and potions to the villagers had passed while he waited with hope and dread for Rhys’s return, darkness at his heels.

He crossed the wooden floor of the cabin, logs he’d hewn and planed himself, lighting the candles with a word as he passed, filling the room with light. Luka paused at the door, hand hesitant on the latch. He had enemies beyond this safe threshold. What if Rhys had gone to them in his bitterness and returned now for revenge? Luka closed his eyes, seeing again the pain on Rhys’s youthful face, the confusion in his eyes when Luka told him to go, and closed the door on his anguished pleas.

A rap on the door sent his pulse racing. Love and doubt warred inside him, but he had to know, see the truth of it. He opened the door a crack; icy wind whistled in. A figure stood on his step, the heavy cloak clutched against the cold obscuring his features. Who was this? He swung the door wider. The energy was all wrong. But Luka would welcome him in whatever guise he wore.

He opened his hungry arms, but Rhys shook his head and looked up, candlelight spilling on his pale face, grown older. “You sent me away—brokenhearted.” Rhys’s voice was deeper than he remembered. “If I cross this threshold, I won’t leave again. Be very sure.”

Luka trembled, searching the beloved features, and mourned the sweet innocence that was missing. Snow sifted through the trees adding to the weight on Rhys’s shoulders, and Luka swallowed his doubts. “Come inside.” He tugged on Rhys’s sleeve, unable to mask his eagerness. His heart stumbled, then leaped, seeing a flash of elation in Rhys’s eyes.

Rhys stepped into the cottage in a flurry of cold air and snow, and Luka hastily closed and latched the door behind him. He turned, and his lips parted in a startled gasp. Rhys had removed his cloak, snow already melting on the warm floor. His golden hair fell loosely to his shoulders, and his body filled out the tunic and trousers he wore in a way it hadn’t five years ago. He had grown into a handsome man, the fine wool of his clothing attesting he’d done well in the village.

Suddenly conscious of his frayed sleeves and ink-stained fingers, the silver now threading his dark braid of hair, Luka glanced away. His gaze fell on the books and parchment littering every surface, candle wax spilled on the tabletops. A thick layer of dust covered the bookshelves, except for the volumes he used for reference. He chewed a lip, troubled.

“Come to the fire,” he offered, taking Rhys’s cloak to hang on a peg. “There’s a stew simmering on the hearth.”

Rhys touched his shoulder, halting him. “A moment. I’ve come to warn you. Your old enemy—”

“Is coming. This I know. We’ll talk of it later. Please, come to the fire. You must be cold.”

Luka swiveled sharply at the command in Rhys’s voice, a thrill rushing through him. So much courage from his once timid lover. Was this the same man he’d rescued? The young lad of seventeen years, chained and beaten in a dank cellar? Rhys wouldn’t speak of his parents back then, saying only he’d lived on the charity of others—until he’d been snared, captive to a cruel man’s dark appetites.

Rhys’s soul had cried out in anguish from his prison, finding Luka’s heart, drawing him deep into the forest to the monster’s isolated hut. Luka had eluded the dark sorcerer, freeing the lad and taking him into his home. And later, into his bed, a moth to Rhys’s bright flame, his heart opened for the first time in uncounted years to love and promise.

Dianne is the author of paranormal/suspense, fantasy adventure, m/m romance, the occasional thriller, and anything else that comes to mind. She lives in the beautiful Willamette Valley of Oregon with her incredibly patient husband, who puts up with the endless hours she spends hunched over the keyboard letting her characters play. She says Oregon’s raindrops are the perfect setting in which to write. There’s something about being cooped up in the house with a fire crackling on the hearth and a cup of hot coffee warming her hands, which kindles her imagination.

Currently, Dianne works as a floral designer in a locally-owned gift shop. Which is the perfect job for her. When not writing, she can express herself through the rich colors and textures of flowers and foliage.