Callan Baird used to laugh more than he frowned, but that was before his wife died. Now his life is duty, debts and a general apathy for anything else. And then Victoria Burke burst into his life. She’s everything he wants to corrupt.

Victoria has two choices: agree to a grouchy, sexy Scotsman’s extortion or call her boss to explain why she can’t do her job. Since she’s spent the last three years rebuilding her career as antique appraiser, and this one commission could make or break it, the decision is a no-brainer. Except everything about Callan is complicated.

He sees no problem turning their work relationship into a sexual one. She refuses to break her boss’ no-fraternization rule. He’s the one thing she wants and the one thing she can’t have. He’s had his one great love, and doesn’t want a replacement. His heart doesn’t agree, because she’s everything he desires.

Callan will have to let go of his past if he wants Victoria to be in his future. 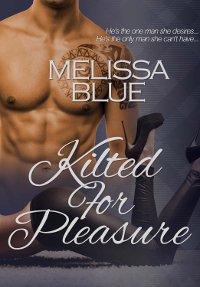 Scotland was a small country. She could probably stand on a crowded street, throw five rocks and each time hit a Campbell. So the surname Baird could very well be commonplace, but given this whole horrible and humiliating exchange, Victoria seriously doubted it. Callan’s elderly relative bore her boss’ last name and that meant Callan…

If defeat had a distinctive noise, she made it in that moment of realization and really looked at the man who had turned her day to shit. The first time she’d met her boss he had intimidated the crap out of her too. His dark stare had been quite foreboding. When he spoke it was with the slightest hint of a burr, and he came across very cultured. Tristan was completely different in almost every way. He smiled often, cracked jokes and sometimes she got the hint he could charm a roomful of enraged rattlesnakes if he put his mind to it.

But Callan…He smiled with all his teeth in a predatory-like manner as though he knew every unkind thought she had had about him. “Papa Baird’s my uncle. When Ian and Tristan left for America, they entrusted me to take care of their father.”

Cousins. Heat rushed into her face again. Nope. She never called any of her cousins by their first and last names. Yup. When she couldn’t check in on her mother, she did ask one cousin or another to drop by. Occasionally, she’d reciprocate. So Ian, Tristan and Callan’s agreement made complete sense.

She’d just agreed to take care of her boss’ father. Of course that couldn’t go wrong.