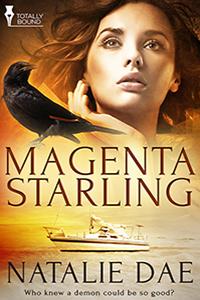 Who knew a demon could be so good?

Cursed at birth, Dion is a demon who has searched for his beloved for centuries. Upon meeting Morgan, he knows she’s the one he’s been waiting for, the one woman he can love forever, the one woman capable of helping him break the curse. However, Jistin, the curse-giver, has other ideas…

Morgan longs for a relationship and release from her solitary life aboard her yacht, The Magenta Starling. She longs for Dion—who’s not all that he appears. When he reveals his feelings for her, Morgan allows Dion to take her to his world, the realm of Thradmos. Her love for him growing even as she struggles to accept his reality, Morgan realizes she would do anything for him—including giving up her life in her own world.

At a party held in celebration of Dion’s impending freedom, Morgan is snatched away by Jistin. In a final battle, Dion will fight not only for his freedom, but also that of his beloved, lest he be cursed for all eternity…and lose Morgan in the process.

Publisher’s Note: This book was previously published elsewhere. It has been revised and re-edited for release with Totally Bound Publishing.