You are here: Home / New Releases / On the Wings of War by Hailey Turner #giveaway 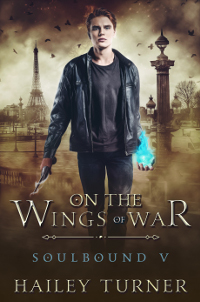 Obeying the gods means Patrick must travel to London. For Jono, it means facing a past he thought he’d left behind forever. His return to England isn’t welcome, and neither is their pack, but Jono and Patrick will face the antagonism together. Politics aside, their priority must be the mission, but the bone-chilling secret they uncover in the London god pack will have far-reaching repercussions no one can ignore.

A race against time takes Patrick and Jono from the streets of London to the bright lights of Paris, where hospitality is thin on the ground, the air is filled with whispered prayers for the missing, and the Morrígan’s staff will end up in the one place it should never have gone—a graveyard.

For beneath Paris lie the long-forgotten dead, and when they rise to walk again, the living can only hope to die.

On the Wings of War is a 109k word m/m urban fantasy with a gay romantic subplot and a HFN ending. It is a direct sequel to A Vigil in the Mourning. Reading the first book in the series would be helpful in enjoying this one.

About On the Wings of War by Hailey Turner: This is an exciting sequel that builds on the series plot and makes readers keep wanting more!

Jono frowned at him. “Why are you angry?”

Jono shook his head. “I’m not letting you go off on your own. I already told you we’re doing this together.”

Patrick finally pulled away, glaring up at Jono. The anger in his scent was strong, but worry cut deeper. Jono wished he could soothe it all way. “The London god pack exiled you.”

“That doesn’t change the fact I’m going with you.”

“You coming with me is a good way to piss them off and get hurt.”

“None of us are safe anywhere. You know that. Stay, go, it doesn’t matter. Someone is always out to get us these days.”

Whether gods, hunters, mercenary magic users, or rival god packs, they had giant targets painted on their backs. If Patrick couldn’t see they were stronger and safer together, Jono would have to argue with him until he did.

“We risk losing too much if we all leave New York. Even with Emma as a secondary and proxy dire, that doesn’t fix the problem of us not being here,” Patrick said flatly.

“I risk everything I care about by letting you fight alone. We tried that with Chicago, and look how things went pear-shaped.”

The strain put on the soulbond by the distance between them had been hard, but being separated was worse. Not knowing what was happening with Patrick had been stressful. Jono didn’t regret the choices he’d made in Patrick’s absence, but he regretted the hurt it had caused the other man. Jono wasn’t willing to go through that again.

Patrick’s mouth twisted, lips going white from the pressure. Jono reached up and pressed his fingers to the seam of them. 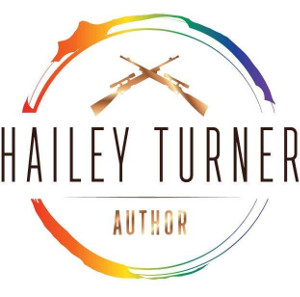 About the Author: Hailey Turner is big city girl who spoils her cats rotten and has a demanding day job that she loves, but not as much as she loves writing. She’s been writing since she was a young child and enjoys reading almost as much as creating a new story.

Newsletter:  You can keep up with Hailey’s future projects by joining her newsletter, where you can instantly download several free short stories:  http://bit.ly/HaileyTurnerNews

Giveaway: to celebrate the release of On the Wings of War by Hailey Turner, we are giving away three e-books to kindle email addresses from Hailey Turner’s back catalogue. Open internationally, must be 18 to enter and win.