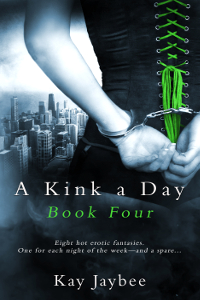 Need some time out from reality?

If ever there was a time to indulge in some kink laden fantasy, then this is it.

What better way to escape from the world for a while, than by enjoying a daily, bite-sized, morsel of erotica?

Each book in Kay Jaybee’s A Kink a Day series provides eight hot reads. One for each night of the week and a spare in case you fancy a weekend lie-in.

Here’s an extract from the beginning of Brick Dust:

‘He…’ A layer of dry dust landed on Liza’s lips, making it difficult to reply.

‘Come on girl. We’ve got you this far, and hell; you don’t half look good.’

Liza could sense Mick’s urgency. Before he’d tied her up his tone had been methodical and controlled. Now, as the quarry foreman towered over Liza, observing her as she discovered what it really meant to be spread-eagled, naked, exposed, and vulnerable, his Praetorian accent crackled with barely suppressed lust.

‘He…’ She licked her lips, tasting stone grit on her tongue, ‘…he wanted to force me into begging to be fucked.’

With her arms at right angles to her body, and her wrists and ankles roped to parallel winch shafts, Liza had the strangest idea that she must look like an open pair of scissors.

After accepting the temporary job as administrator at the South African sandstone brick quarry, Liza’s main worry had centred around coping with the extreme heat after years of living on the cool English coast.

Once she’d arrived however, Liza had moved on from considering how she would keep cool to how she’d manage to keep her hands off her boss. Within half an hour of meeting Mick, Liza had been fantasising about what it would be like to sit on his lap; slowly rising her arse up and down, as her body engulfed his thick, solid cock…

That afternoon, sat at office desks, Liza had been struggling to coat the back of her neck with sun cream, and Mick had offered to help.

If Mick had stopped applying the lotion once he’d covered her neck, then perhaps nothing would have happened. But Liza hadn’t wanted him to stop. She’d daydreamed so often about the site foreman giving her a more thorough lotioning than was strictly necessary, she hadn’t complained when Mick lifted her vest top over her head and began to anoint the rest of her back.

It was only when Mick moved to her front, that the reality of discovery had invaded Liza’s brain. The idea that someone could walk into their office had dragged her fantasy fuelled imaginings from the tug Mick was creating at her crotch, and caused her to defensively cover her white bra with her hands.

‘What is it with you?’ Mick sat back, more amused than annoyed. ‘One minute you’re asking me to run my hands all over that hot body of yours, and the next you’ve gone cold. Who you hiding from?’

‘What makes you think I’m hiding? I just don’t want anyone to walk in and see me with your paws all over my chest.’

‘Come off it. You’re hiding. Why else would you be working in the middle of nowhere for six months when you could be running some nice clean company back home.’ Mick winked at Liza, the fact she hadn’t complained about his hands being on her tits silently hung in the air between them.

‘Anyway, you’re not the first. Nearly everyone who takes your job is avoiding something somewhere else. What’s your excuse for turning up here? Not just to give me wank dreams surely?’

Perversely pleased that she’d been having as much an effect on Mick as he had on her, Liza gave him a half smile. ‘You wank about me?’

‘Believe it. You’ve done some unbelievable things in my head…’

(A Kink a Day Book One, Book Two and Book Three are already available as eBooks from Amazon, Smashwords, Barnes and Noble, and all good retailers.)

Details of all her short stories and other publications can be found at www.kayjaybee.me.uk