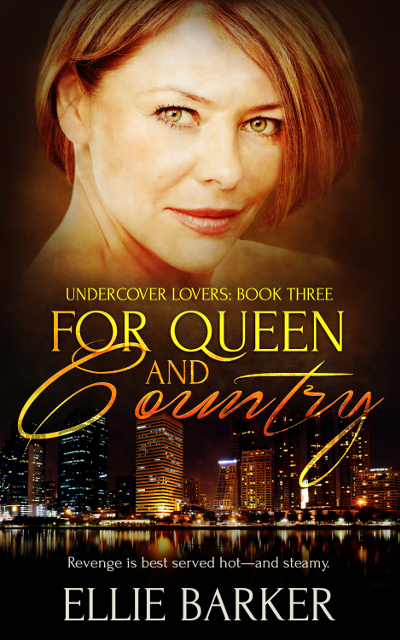 For Queen and Country concludes the story of Nikolas, a bisexual police mole, and Sky, a transgender thief, as they work to infiltrate the local crime syndicate. Ellie Barker has created a fast paced and highly entertaining trilogy, with a diverse range of characters, various sexual encounters, and unconventional romance. Secrets and Spies, the first in the trilogy, was released in May 2018, and In Bed with the Enemy, the second book in the trilogy, was released in July 2018.

The Undercover Lovers trilogy is Amazon exclusive for a limited time before being released across all main platforms. It is available to read through Kindle Unlimited.

Nikolas Jinsen, police mole and mafia odd-job man, is given an ultimatum; stop seeing his girlfriend, or lose his job. When a hasty attempt to keep both goes wrong, he does the only thing he can think of: he lies. But with his new roommate a member of the elite gang that Nikolas has been tasked to look into, and his assignations with his girlfriend constantly interrupted by calls on his services as a lover, Nikolas finds that work isn’t all fun and games.

There’s something about fucking people I hate that I absolutely love.

It’s partly the pleasure. I can make them writhe, moan, plead for me to just keep doing what I’m doing. I can stop, teasing and taunting, sliding in and out slowly, flicking a clit or a nipple with my fingers or tongue. I can reduce them to a begging, panting mess just by using my body and my cock.

And it’s partly the sense of power. It’s being able to bend them naked over whatever I want, grip their hips, thrust in again and again. I love the way my hips slam into their skin, the way my fingers pinch and tug flesh, eliciting moans of pleasure even when I’m hurting them.

To see someone I hate at my command, helpless under my tongue, is really satisfying.

Case in point: Tanya Mardos. Blonde, large-breasted, round-assed, and quite frankly one of the biggest bitches I’ve ever met. She was a bitch to my girlfriend, and she’s a bitch to most of the people around her. She’s also a grade-A bitch when it comes to business, mostly because she doesn’t shy away from the illegal side of things.

She’s usually quite nice to me, but that’s because I have a cock and I know how to make her come—multiple times, if necessary. I’m a tool that she likes, especially right now, because I’ve just given her a screaming orgasm in her favourite position: up against the floor-to-ceiling windows of her penthouse, with everyone outside able to see her hot, naked body.

Not that they can, incidentally, because security dictates the glass is one-way. But it’s a fantastic illusion, and considering Tanya is an exhibitionist, she makes the most of it.

She’d just finished making the most of it, and headed back into the room to pick up a drink from the desk as I wiped my face and remembered how to breathe.

You can find out more about Ellie over at http://elliebarker.co.uk/, or follow her on Twitter as @EllieBa3