You are here: Home / New Releases / Say You’re Mine by Aliyah Burke (@AliyahBurke96) 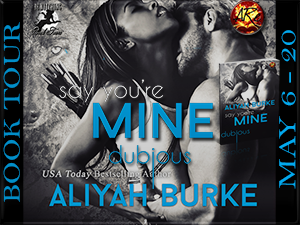 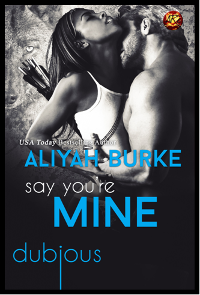 Casimir Lars is the Alpha of the Tatra Pack. He fought hard to become the leader he is today. He refuses to show weakness or allow others to take advantage of him. He’s dedicated to his pack, strong and fearless, yet his life is thrown into upheaval when he has to track down a very specific woman: his wife.

Dyana Vance is a headstrong professional archer—not the type to trust blindly when a stranger shows up claiming to be her husband. There’s no denying the explosive chemistry she has with Casimir, but she isn’t pack and refuses to be bound by their laws.

Casimir is torn between his growing feelings toward her and what he believes is his duty to mate with a pack female. Dyana learns to deal with loss and discovery of something new. Death, plots, and undeniable passion all fly around this couple.

When he accepts what is to be, will he be too late or will his pride have pushed her away forever? Will she ever look at him and say you’re mine?

Casimir Lars fought off his increasing agitation. This woman was proving to be a bear to track down. He remained alert, not about to let his guard down.

Spying the coffee shop he sought, he strode across the street, well aware yet ignoring those who watched him. Mostly women, and he could sense the lust coming from them. He pushed through and scanned the patrons. The only information he had was she was a black woman. That was it. Oh, and her name.

His phone vibrated. “What?”

“Not in the mood, Kraven.” Mattias Kraven, not just one of his top lieutenants but the top and his best friend.

The laughter, unapologetic. “I am sending you her picture. I finally located one.”

“Good.” It had both baffled and annoyed him no pictures were found of her. “Anything else?”

“Two from the Western Clan are coming in to discuss the issues we’ve been having along their border with them. I will handle it.”

“Make sure the cubs are there to apologize, we don’t need to be at war with them.”

More unappreciated laughter. Casimir hung up and waited for the image and name. When he saw it, he understood why they’d not found her. Her last name was different than his grandparents had given him.

Dyana Vance. Not Hunt like they’d assumed. A lot more information popped up but he ignored it. It wasn’t pertinent to learn about her, just to get what he came for.

He spied her in the far corner. Unlike most who occupied the place, she read an actual book instead of being on an electronic device. He read the title and realized he had no clue what Straits of Power was about, although with the submarine on the cover, he deduced an idea. He also hadn’t heard of the author, Joe Buff.

He strolled over to her table and waited for her to acknowledge him. She finished her page before deigning to glance at him. Her brown eyes snared him, the amber flecks they contained were unique. One eyebrow had a slash through it and rose.

She summarily dismissed him and went back to her book. He frowned; being the alpha of his pack, he wasn’t used to being waved off like yesterday’s trash.

“Yana!” A female hollered from behind him.

His target closed her book immediately and slid it into an old tatty black backpack. She got to her feet, shouldered her bag, and brushed by him without a word.

“We’ll be the first ones there. As usual. I don’t think the Bankses will party without you.”

Humor laced her tone. His wolf perked up its ears but other than that showed no more than a passing interest. He realized she was on her way out and turned to stop her, no way he was leaving without getting what he came for.

She stood by her friend, Shyla. A pretty petite blonde with a huge smile. Even less reaction from his wolf. He took a step in their direction when someone else came up to them. A black woman who also smiled a lot.

Dyana shoved a hand through her straight hair and the sun gleamed off the gold highlights as she laughed at her friend’s comment. She had a nice laugh.

A new scent hit him. It garnered a response from him and his wolf. Turning back, he instantly spotted the man who’d entered via the other door.

He looked like the majority of the people he’d seen, however, the scent he emitted told an entirely different story. The man hunted. When he met Casimir’s gaze, he deferred immediately. He was a beta all the way around and wouldn’t challenge an alpha.

With a blink, Casimir glanced back to where she’d been. She was gone. Ignoring his wolf’s amusement, he locked onto her scent and began tracking her.

She and her friends stood at an outdoor stall, admiring the purses. More the other two. Ready to go home, he approached and waited for eye contact. When she noticed him, her eyes narrowed and he became more alert.

“You were watching me in the coffee shop. Something I can do for you, hoss?”

Hoss? He truly needed to get home.

Aliyah Burke is an avid reader and is never far from pen and paper (or the computer). She loves to hear from her readers and can be found on Facebook or Twitter at @AliyahBurke96.

She is married to a career military man. They are owned by four Borzoi, and a DSH cat. She spends her days sharing time between work, writing, and dog training.

For more information on other books by Aliyah, visit her website: